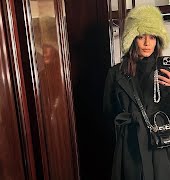 The Basic Bitch is a lie. She’s an illusion conjured out of Instagram filters and thin air. She’s a trend piece fashioned into a political statement. And more than that, she’s an uncomfortable reflection of ourselves.

Within the past week, the Guardian, New York Magazine and most recently Jezebel have picked up on the concept of the ‘basic bitch’, a rap term which has spilled over onto Tumblr and Buzzfeed. They’re familiar to most: those girls you can’t get past pleasantries with, who wore Uggs and Hollister in school and kept up with reality TV. Privately I used to call them the ‘Ponytail Girls’?they travelled in packs, and struck the fear of god into me because I never knew how to talk to them and couldn’t tell their faces apart.

Side-lining your contemporaries as ‘basic’ is excusable when you’re a teenager. You’re angsty, insecure and way too intense about the little things. You assume you’re weird because everyone else seems enviably normal, and you rage against the machine with due virulence. ?You are never a ‘badder bitch’ than when you are a teen, fueled by the private fear that everyone else will do better than you in their exams.

But this stops being excusable when you’re old enough to know better. Old enough to be reading The Cut, or Jezebel, or wherever else has seized upon the scapegoating of the basic bitch. The internet is a lot like high school, in that we construct elaborately bland versions of ourselves – often unconsciously – to win a community’s approval. Twitter and Facebook run on meritocratic lines: you might tell yourself that individuality brings in Likes and followers, but it’s the run-of-the-mill, lowest-common-denominator content you share that gets the most traction. That forgettable remix, those Upworthy links, a picture of a baby cat looking bashful. Community is built on what we have in common, and Facebook, especially, has a way of putting this to the forefront.

To discount people as boring based on their online behaviors is myopic, narrow-minded, unfeminist and, for want of a better word, bitchy. ?And it’s online that people are more than ever labelled ‘basic’. Don’t confuse your Facebook friends with your real friends, because the online version is them at their most ‘basic’. A liking for pumpkin spice lattes does not give a reading of a person, nor does a gluten intolerance or emotional investment in Breaking Bad. Sometimes people just like something because it’s good. Or because it affects the gut lining of between 5% and 10% of the world’s population.

How does social media explain the basic bitch? Because social media has made basic bitches of us all. We don’t question how Pinterest casts us as housewives, Instagram makes us cupcake fetishists and Twitter leaves us politicized in that noncommittal good-eggy way. Each social platform has its own distinctive tone: we are encouraged to appropriate it and Share and Like accordingly. What you see, between the self-crafting and the algorithms written to highlight ‘heavyweight content’, is the most ‘basic’ version of humanity. It’s like those friends you only talk to when they’re drunk: you only see them at their worst.

Social media thrives on the bland and universally agreeable; mirror selfies, holiday snaps, comments about the weather. Look at your own Instagram or Twitter or Facebook and I dare you not to find elements of the same. At least the motivational quotes and shots of latte art shared by ‘basic bitches’ show a savviness towards the system, an ability to weed out the ‘Upworthiest’ of links. Who knows what’s going on in their offline lives: perhaps they need that motivational quote because they’re in recovery, perhaps they’re sharing that latte with someone else’s husband. Hating on the ‘Basic Bitches’ distracts us from a wider social media fatigue.

They are players in the economy of Likes, and if you don’t Like it, maybe you should unfollow.

That said, it does make for all kinds of PH scale-themed witticisms. And Emma Stone can tell you more