Greta Thunberg calls out the fashion industry for greenwashing

"You cannot mass produce fashion or consume "sustainably" as the world is shaped today."

Swedish climate activist Greta Thunberg is the cover star of Vogue Scandinavia‘s first issue, talking about her vision for a sustainable future. The campaigner is photographed in nature and wearing an upcycled trench coat.

Sharing her Vogue cover on social media, Thunberg called out the fashion industry for its role in the climate crisis. “The fashion industry is a huge contributor to the climate-and ecological emergency, not to mention its impact on the countless workers and communities who are being exploited around the world in order for some to enjoy fast fashion that many treat as disposables,” she wrote on Twitter. “Many make it look as if the fashion industry is starting to take responsibility, spending fantasy amounts on campaigns portraying themselves as “sustainable”, “ethical”, “green”, “climate neutral” or “fair”. But let’s be clear: This is almost never anything but pure greenwash. You cannot mass produce fashion or consume “sustainably” as the world is shaped today. That is one of the many reasons why we will need a system change.”

Vogue Scandinavia’s debut issue coincides with the release of a landmark climate report that states it is “unequivocal” that humans are the cause of climate change.

In her profile in Vogue Scandinavia, Thunberg focused on fast fashion, saying, “the last time I bought something new was three years ago and it was second-hand. I just borrow things from people I know.”

According to the United Nations. the fashion industry is “widely believed to be the second-most polluting industry in the world”, accounting for more than 20% of wastewater globally. The sector was responsible for 2.1 billion tonnes of greenhouse gas emissions in 2018, accounting for 4% of the global total. The Intergovernmental Panel on Climate Change determines that the fashion industry produces 10% of global carbon dioxide emissions every year, more than all international flights and shipping combined. 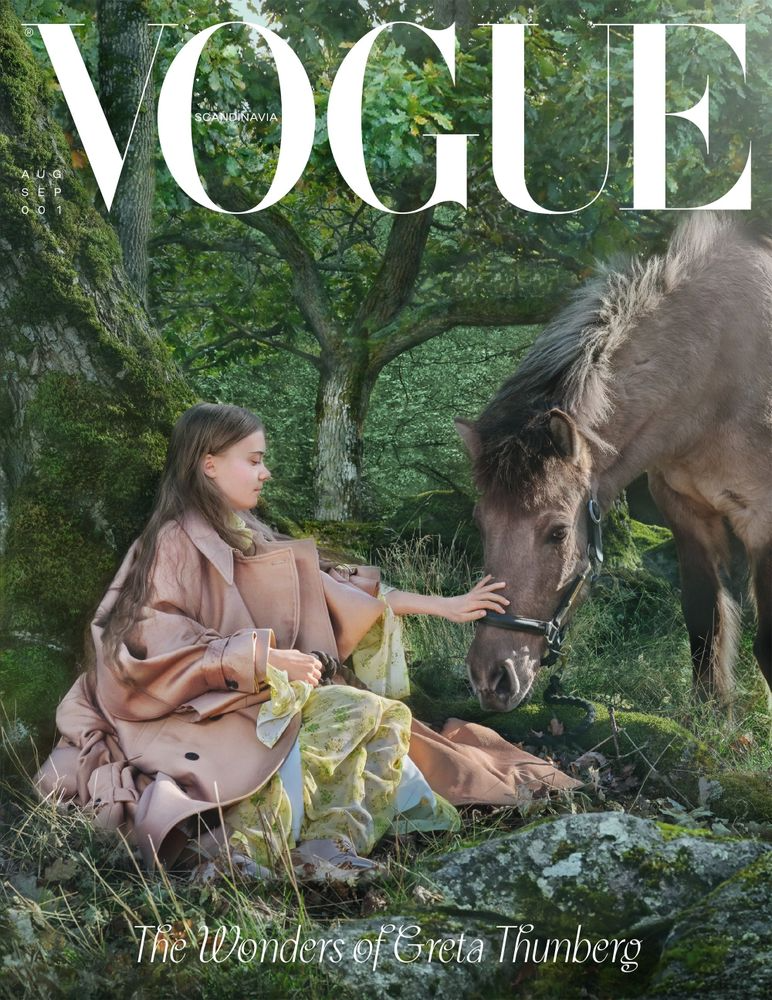 Photography of Greta Thunberg on the cover of Vogue Scandinavia by Alexandrov Klum.