Wear Your Art On Your Sleeve

The concept isn’t new, but each?year, designers delight us with a fresh interpretation of wearable art. MARIE KELLY has designs on more than one masterpiece this season.

Designers often treat their clothes as garments and more as blank canvases. This is not new to SS16. As far back as 1937, Italian fashion designer Elsa Schiaparelli collaborated with Salvador?Dal? on a fantastical lobster-print gown of silk organza and synthetic horsehair. During his tenure at Louis Vuitton, Marc Jacobs collaborated with renowned artists such as Stephen Sprouse and Takashi Murakami on accessories for the French fashion house.

But these days, the fusion of fashion and art is commonplace, and doesn’t have to involve a collaboration. Designers from Lanvin to Marni have become masters of a kind of “painterly” aesthetic, creating pieces worthy of being hung on a gallery wall, while Dries Van Noten is recognised as an unqualified print master. His jacquard patterns, peacock plumage designs and Art Deco-inspired motifs are celebrated well beyond the boundaries of the fashion community. Indeed in 2014, a retrospective of the Belgian designer’s work was celebrated at the?Mus?e des Arts D?coratifs in Paris.

His designs were displayed alongside those artists who have inspired him, from Rothko to Hirst. This trend works in reverse too. Irish artist Helen Steele has moved seamlessly into fashion design since 2010, when she collaboratd with Harvey Nichols on its SS10 show. In 2011, she and fashion designer Joanne Hynes created a capsule collection called Les Guerriers, which featured kaleidoscopic prints from Steele’s archive. 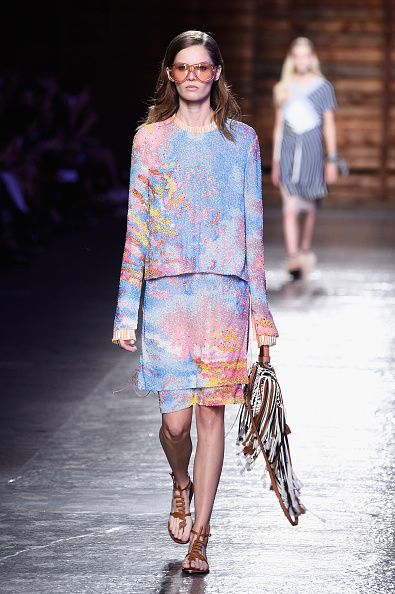 Like every trend that begins on the international catwalks, wearable art has been filtering down to the high street for some time. Artist Jeff Koons collaborated with mass market retailer H&M in 2014, while iconic denim brand J Brand released a gradient spray-painted style of jean designed by contemporary American artist Rob Pruitt the same year.

If fashion designers are inspired to create sartorial works of art by the artist whose pieces they most admire, it’s not suprising that many women, myself among them, are drawn to the same aesthetic, whether shopping for clothes or art. The Tony O’Malley print that hangs above my bed, for instance, is an abstract painting that I’d happily transfer onto a silk dress, while the Felim Egan watercolours in my living room would translate onto a cashmere top or tshirt. On seeing Pucci’s SS16 show, it reminded me first and foremost of an Eric Patton landscape that I love and made me covet a piece from the collection more than I might have otherwise.

This season, Lanvin, Acne and Pucci have embraced the trend with gusto, but in very different guises, the former reimagining urban art influences while the latter, soft toned impressionist prints. At Viktor & Rolf it all about shape, with silhouettes unapologetically sculptural – perhaps more art for arts sake than wearable art. But if you can pull off one of their Picasso-inspired modular dresses, go for it. Me? I’ll be channeling a more subtle take on the trend – Christopher Kane for my wardrobe and Ciar?n?Lennon for my wall.

This article originally appeared in the April issue of IMAGE – on shelves now.