The future of the fashion show is uncertain, but here’s hoping Paris Haute Couture stays spectacular

The future of the fashion show and the fashion cycle is up in the air right now. One of the chosen few invited, Irish fashion critic Godrey Deeny revels in the innovation and majesty that defines the most magical week in the fashion calendar; Paris Haute Couture.

If you want to witness the pinnacle of fashion, then your year begins in Paris with a new season of haute couture shows.

Couture is both the laboratory of fashion and the source of the most beautiful and expensive clothes available. The Mount Everest de la mode is a jealously guarded French institution; foreign couturiers must show in Paris, for it only takes place here, not anywhere else. So, each January, a regiment of movie stars, major fashion editors, photogenic influencers and billionaires’ wives descend on Paris to attend shows from the greatest European fashion houses – Chanel, Dior and Valentino, or the three Gs: Giorgio Armani, Givenchy and Jean Paul Gaultier. One can never buy a ticket to couture, one can only pray to be invited.

Each morning begins with flotillas of well-guarded limousines setting off to the major shows. Though often rarefied and fanciful, couture ideas always trickle down into their houses’ ready-to-wear – the pricey collections you can purchase in luxury brand flagships, or top-notch department stores like Brown Thomas. These looks are, in turn, interpreted, or quite frankly stolen, by high street chains. So, couture still foretells trends. Last season was one of the most sombre in living memory– romantic, nostalgic and even spiritual. 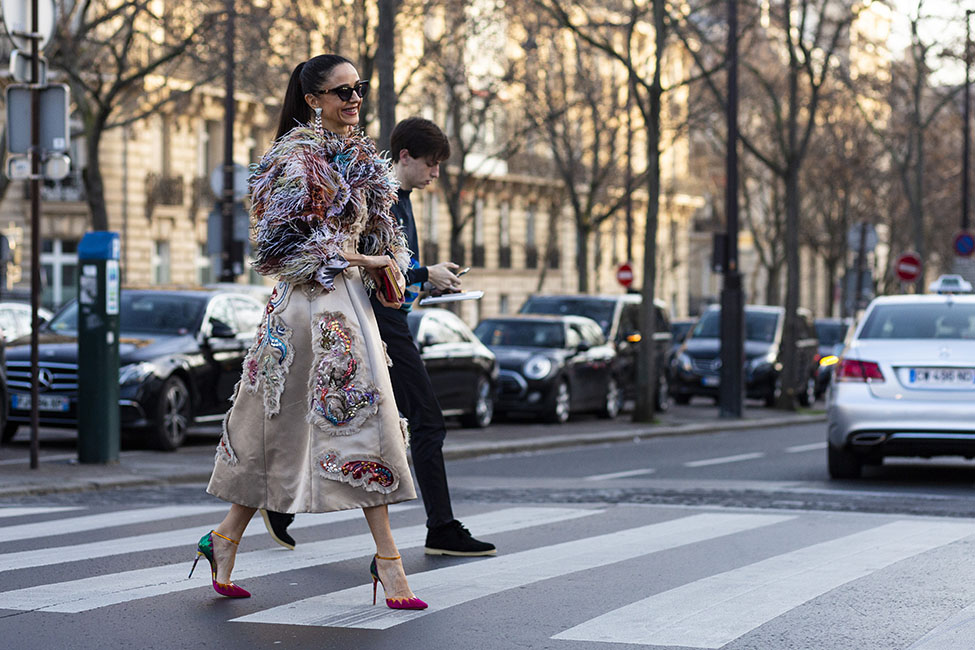 At Chanel, Karl Lagerfeld’s successor, Virginie Viard, was inspired by a visit to Aubazine, the 11th abbey school for orphans where Coco Chanel spent six years as a child. Coco’s whole aesthetic and greatest invention, the little black dress, was inspired by the austere simplicity of the Sacred Heart nuns. I confess I don’t recall anyone in Mount Anville looking anything like Chanel’s Mother Superior this season – Gigi Hadid – in a floor-length belted gown, split well up the thigh and worn with teenager white socks and patent leather pumps. Though a show lasts barely 20 minutes, brands like Chanel spend millions decorating their show space. Last season, an exact replica of a convent cloister garden, with working Provençal fountain in the centre, was built inside the Grand Palais. 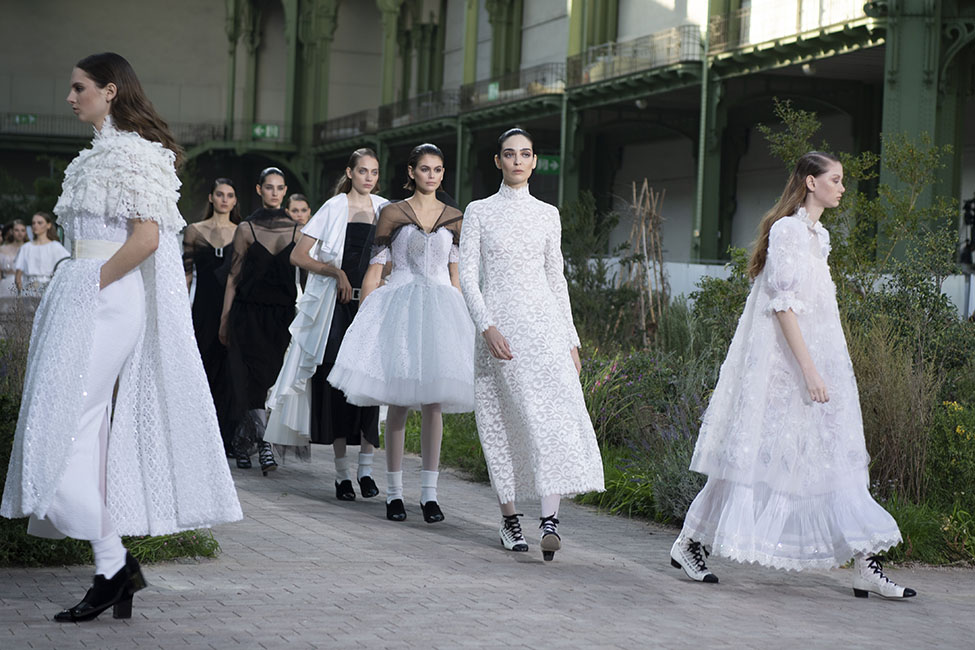 It was a season of empowerment at Dior, where the set was a giant sculpture of a woman’s torso entitled “The Female Divine” by feminist artist Judy Chicago, constructed inside the garden of the Rodin Museum. Dior’s Italian couturier Maria Grazia Chiuri showed clothes for goddesses – Athena in rose gold crêpe column, or Venus in ivory silk peplum, finished with intricate midriff embroidery. Each fashion myth was accessorised with golden sandals, snake bracelets and leafy armbands– a trend sure to be copied by global chains. You knew your place in the fashion world’s pecking order by the seat you were allocated inside Dior’s torso – wealthy clients down at the bottom; fashion critics like myself and influencers in the womb; Anna Wintour and Vogue editors at the bosom, and movie stars and the tsar of luxury, LVMH chairman and Dior owner Bernard Arnault, at the neckline. He positively beamed all week, which is no surprise, really, given a jump in LVMH stock price meant he overtook Jeff Bezos as the world’s richest man. 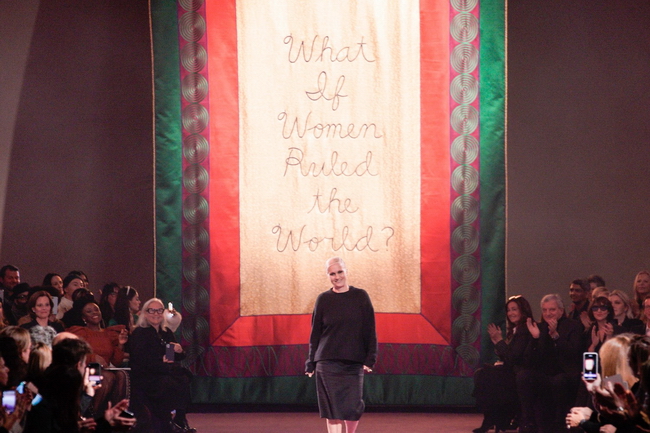 Pre-show, I enjoyed a trip to the holy of holies, a 45-minute Dior preview with Chiuri, where she talked me through her moodboard and inspiration while making a final edit to three looks. On the evening after the Dior show, Maria Grazia hosted the dinner of the season: 150 guests at one long table inside “The Female Divine”. I sat beside Kristin Scott Thomas, who looked majestic in a pickle green crêpe gown. “Don’t ask me what season! I saw it at Dior today, and I thought, ‘I’m having that,’” explained Kristin as we dined on carpaccio of scallops and royal sole with caviar. Opposite me – a little confusingly – Alexa Chung and Angelica Cheung. One is an It gal and fledgeling designer, the other (was) the editor-in-chief of Vogue China, and fashion’s most powerful woman after Wintour.

When Judy Chicago passed by, we asked the feminist artist who her favourite goddess was. “Oh, it has to be Ishtar. She bossed all the male gods in Mesopotamia!” Somewhat like couture, given that over a dozen women couturiers presented collections, and the three most important French couture houses – Chanel, Dior and Givenchy – all have female creative directors. Though the prize for nabbing the biggest movie star of the season went to Giorgio Armani, who had Reese Witherspoon front row at his ethnic collection inspired by the Indonesian tie-dye fabric. Much of it immediately freighted to Los Angeles, for Hollywood star stylists to fight over during awards season. 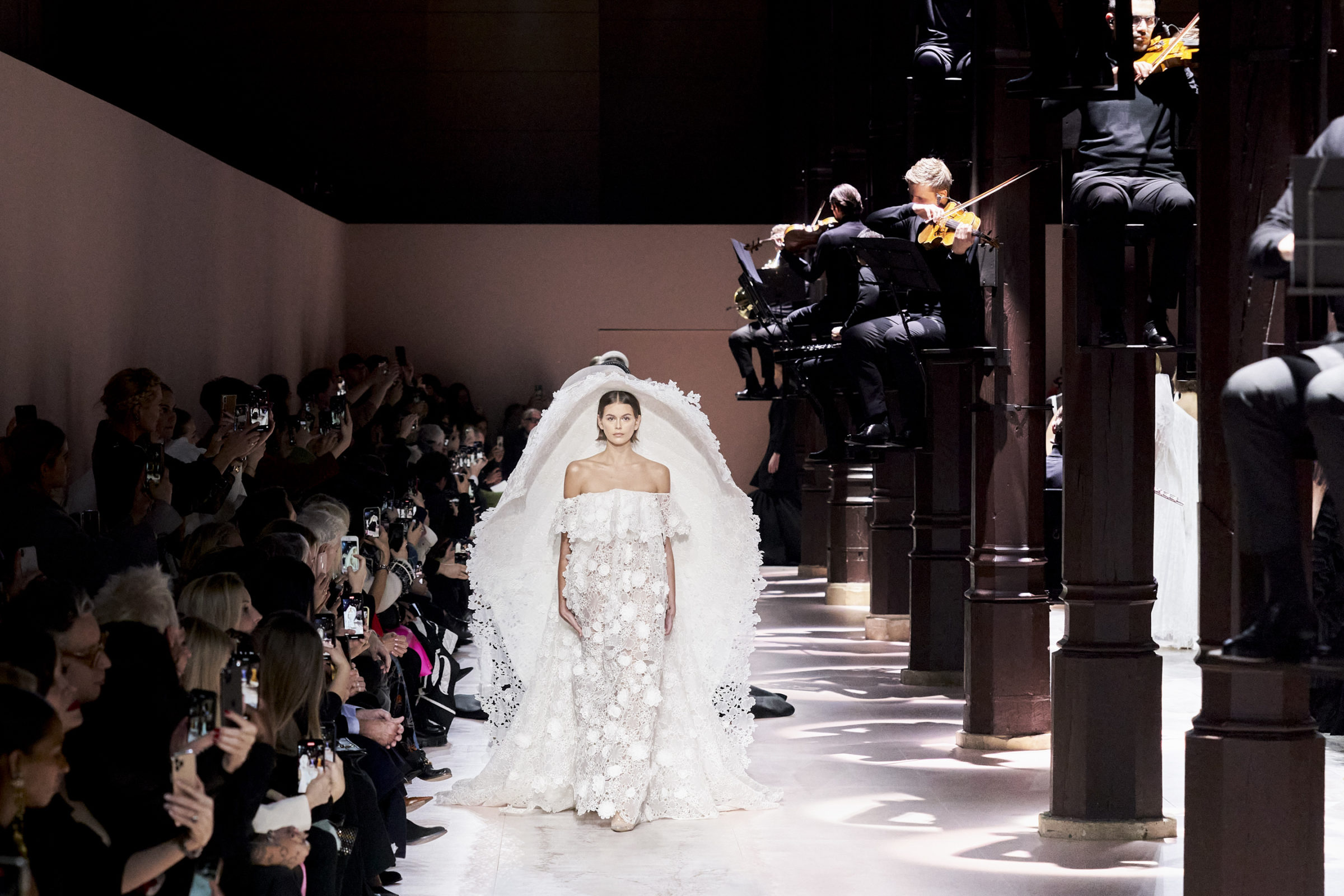 The most sensational Grammy look this year was worn by Ariana Grande – a voluminous tulle gown, some 20 metres in diameter, designed by Giambattista Valli. The Roman-born couturier presented his latest ideas with a pop-up exhibition inside the Jeude Paume museum in the Tuileries Gardens. Sobriety was the leitmotif at Givenchy, where Clare Waight Keller was influenced by the famed Sissinghurst Garden, and the love between the two women who inspired it, Vita Sackville-West and Virginia Woolf. A voluminous display, enormous silhouettes mimicked the shape of garden flowers, from irises to gypsophila. It was staged in a 16th-century convent, with a chamber orchestra, attached miraculously on chairs five metres up some soaring wooden columns. 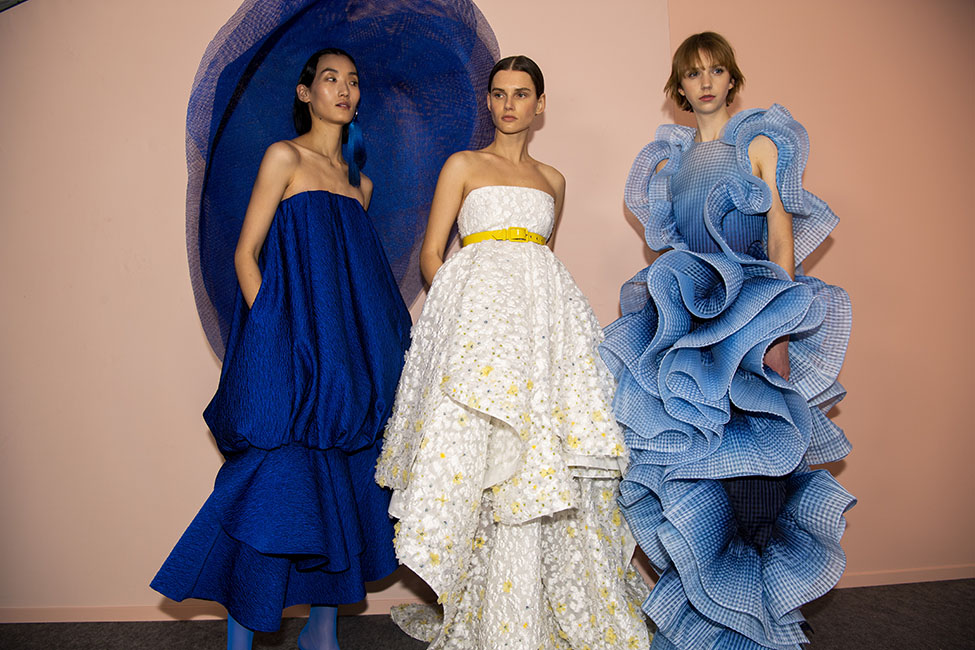 “Couture ideas trickle down into their houses’ ready-to-wear and are interpreted by high street chains. So, couture still foretells trends.”

Couture is also where you’ll see the most breathtaking hair and make-up. At Givenchy, models were finished with sculptural hairpieces courtesy of Guido Palau. At Gaultier, metallic freckles. At Schiaparelli, jewel emblazoned faces. And at Dior, graphic gold double-winged eyeliner. 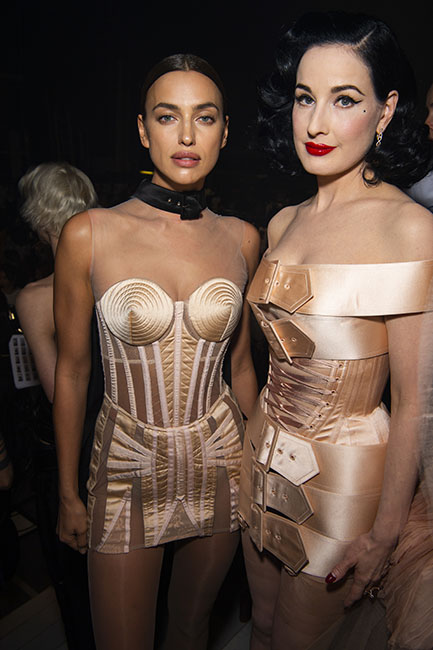 At Valentino, as at Valli, collections referenced Marella Agnelli, wife of Fiat owner Gianni, with majestic faille dresses worthy of a 1950s screen idol. Both expressed a longing for polished glamour. Though not every event attracts the appallingly wealthy; many couturiers are genuine avant-garde artists. Like Franck Sorbier, an indie house that had dressage horses on its garage runway and a Mexican femme fatale theme. Or John Galliano, whose show for Maison Margiela played on returning heroes from WWI in deconstructed outfits – think 1917 in the Moulin Rouge. 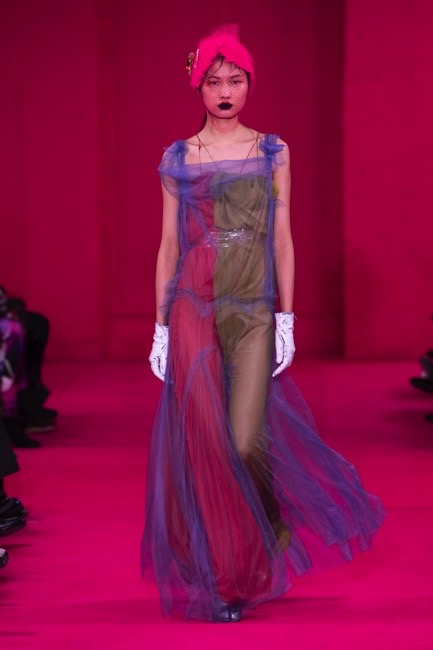 That said, many couturiers are born with the proverbial silver spoon or golden thimble. August Getty – grandson of another richest man in the world – presented genderless nymphs in giant fan-shaped concoctions in a wacky presentation inside the Louvre. Or Lebanese designer Rabih Kayrouz, who shows inside a small 19th-century atelier, where Samuel Beckett once debuted Waiting for Godot. Up a rickety staircase, 300 guests crammed inside to witness Kayrouz’s mix of sublime, perfectly cut coat-capes and faintly farcical Bride of Frankenstein cut-out toile dresses. 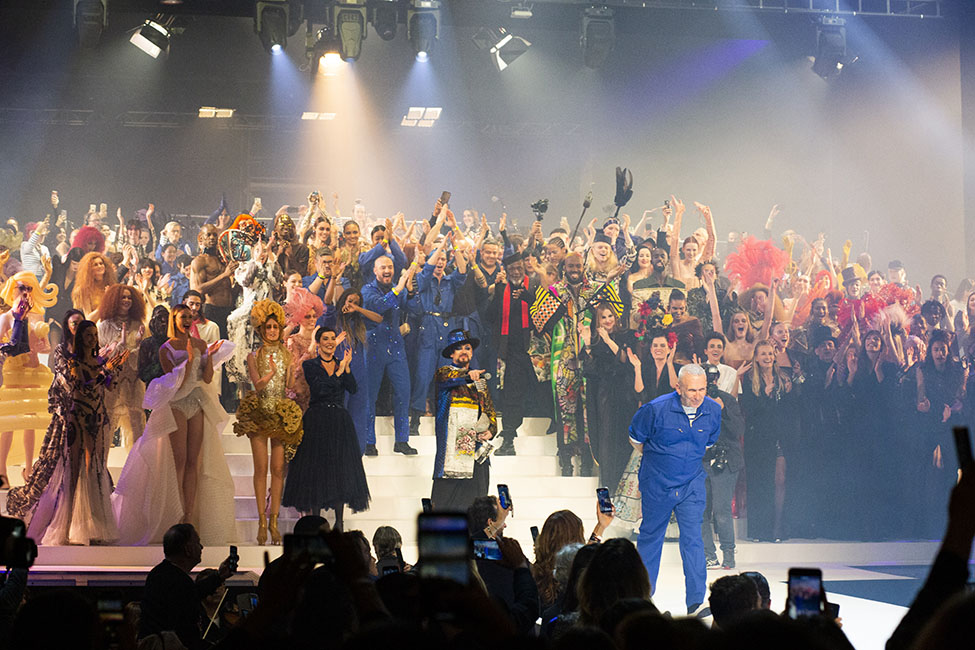 The overbiding memory last season was the bittersweet farewell of Gaultier, who stunned the industry by announcing that this would be his last runway show. Nearly a score of designers came to pay their respects as he ended his career on his 50th anniversary. Boy George and Catherine Ringer of Les Rita Mitsouko performed; Gigi and Bella Hadid and a gang of über model veterans like Erin O’Connor and Yasmin Le Bon marched, and Jean Paul took his bow in what’s sure to be a new must-have – a bleu de travail car mechanic’s jumpsuit. 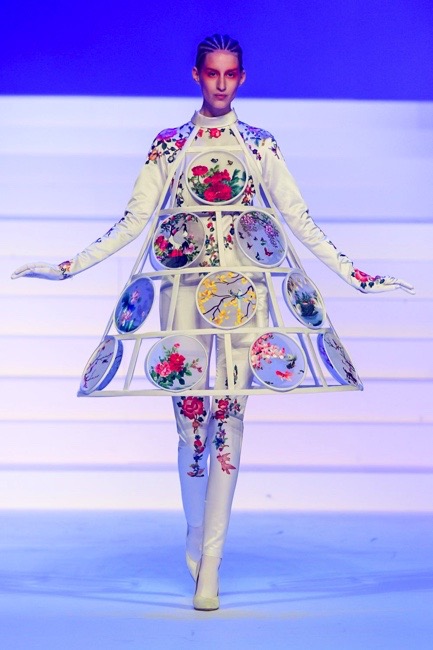 At the height of his game, in the 1990s, it was said there were more ideas in one Gaultier look than in most other designers’ entire collections. And his finale riffed through a dozen movements he launched – transgender style, body diversity, deconstruction, sadomasochistic chic, and luxury workwear to name a few – in over 250 thrilling passages that brought the curtain down not just on Gaultier, but an entire era. The finale of the French creator, and the passing of fashion’s greatest enfant terrible.

This article from Irish fashion critic Godfrey Deeny, columnist with IMAGE Magazine appeared in the Volume 2 issue of IMAGE Magazine. Armagh-born, Paris-based Deeny is the former editor of Vogue Hommes and the international editor-in-chief of FashionNetwork.com. Friend to all the fashion greats, The Business of Fashion lists him as one of the most influential people in the world from his “thoroughly informed, opinionated and sporadically merciless” writing style.