Why Katharine Hepburn is still a modern style icon

I grew up watching old movies, anything from Imitation of Life with Lana Turner (the first movie ever to make me weep, apart from Champ of course), to the super glossy Gentlemen Prefer Blondes with the mesmerising Marilyn Monroe and Jane Russell, as well as the wonderful How To Marry A Millionaire with the equally wonderful Lauren Bacall.

The storylines were smart, the scripts funny and the characters intriguing, but most of all the fashion was magical. Diamanté-encrusted dresses, column-length gowns and elaborate but effortlessly matched accessories were common. Despite this, the actress who caught my attention above any other was the much more understated Katharine Hepburn. She intrigued me because she offered a punctuation to all the extreme glamour, glitz and overt femininity that characterised movies and stars of the thirties, forties and fifties.

In her film roles as well as her personal life, she turned traditional female stereotypes on their head. She wore trousers before it was fashionable or acceptable to do so. The Vogue cover featuring Stella Tenant a couple of years ago where she stood poised in a simple button-up shirt and trousers, hands comfortably placed in her pockets, was one of my favourites, partly because it reminded me so much of Hepburn’s signature style. The Vogue cover felt so modern on one level, yet for me it offered a blast from the past.

I love everything about Hepburn in the below image: the languid tailoring and the boyish brogues which she was always a champion of, but I’m also intrigued by the contrast between her awkwardly positioned feet and the refinement and poise of her upper body. Hepburn was a woman of two halves – quirky, feisty and outspoken on the one hand, fiercely private and reserved on the other. She kept her 26-year love affair with actor Spencer Tracy quiet for the entire time, appearing to the outside world as a long-time singleton (she was married briefly beforehand). This was a radical position for a woman to maintain in the forties and fifties. 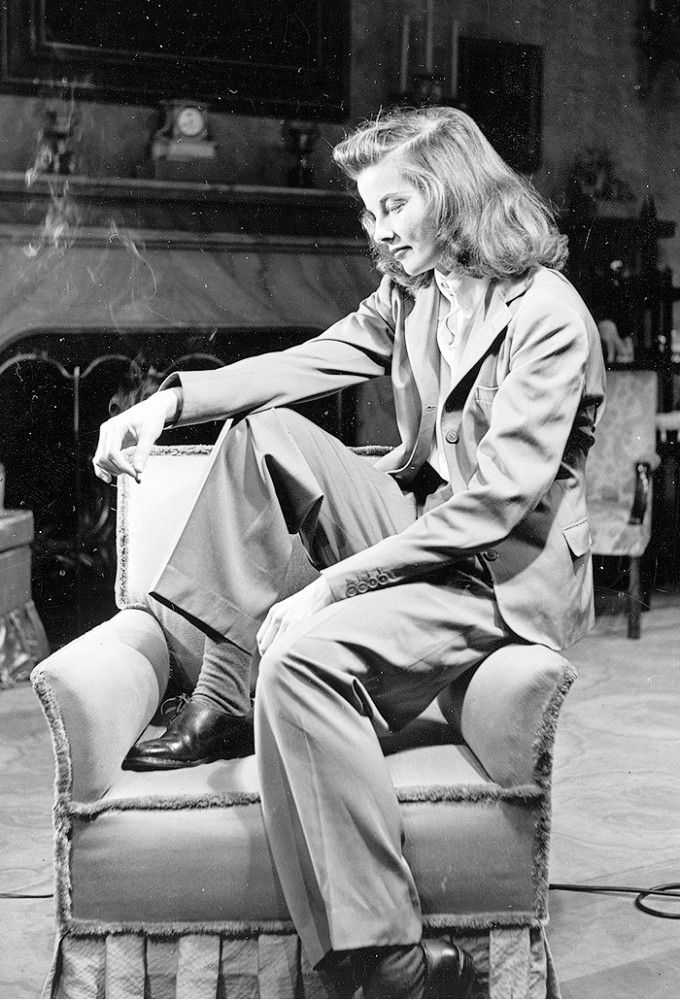 What’s so interesting about Hepburn is that she had all the raw materials to be a classic Hollywood beauty if that’s what she’d wanted. In the photograph below, Hepburn is preparing for a theatre role in As You Like It. Her legs look incredible, her cheekbones exquisite and her lips full. 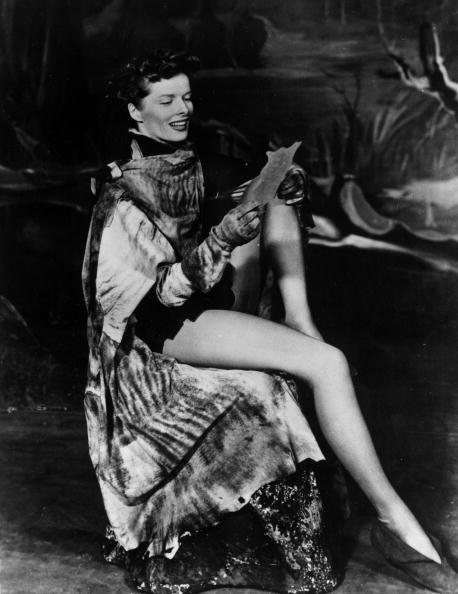 But Hepburn was so much more than the sum of her physical parts – she would never be defined by how she looked – and her sartorial choices reflected this. Lapels, collars, cuffs, structured shoulders and fluid, boyish silhouettes were her hallmark. I always found it intriguing to watch her in movies wearing frothy and frilly gowns. She looked beautiful certainly, but I always felt she was probably itching to get out of them. But being a four-time Oscar winner, Hepburn could play the traditional heroine just as well as she could the maverick, fence-climbing Jo in the 1933 version of Louisa May Alcott’s Little Women.

To me, she never looked more like her true self than in the iconic movie Guess Who’s Coming To Dinner? Starring opposite Tracy in their later years, she probably felt as at home on set with him as anywhere.