Sarah Jessica Parker Reveals One Of Her Favourite SATC Moments

The rumours of a third movie may be on the back burner for the time being, but that doesn’t mean we can’t enjoy talking about the cultural phenomenon that was Sex and the City. And 11 years after the last episode broadcast, actress Sarah Jessica Parker who played the beloved, couture-obsessed Carrie Bradshaw is still getting asked about her favourite moments from the now iconic series.

And there are many moments that could be counted as favourites for sure. The moment we discover the fate of will-they-wont-they couple Carrie and Mr Big? The “Your girl is lovely, Hubbell,” line? The part where Heidi Klum steps over ?fashion roadkill? Carrie? We could go on about many more moments, all the clothes and the amazing shoes. Never forget the shoes.

And on the topic of shoes, it turns out one of SJP’s favourite SATC moments revolves around these. This isn’t surprising as the actress, much like her famous character, also shares an affinity with shoes and launched her own line. She subsequently revealed what she called her favourite ‘shoe moment? from the series in a recent interview with Harper’s Bazaar.

The moment in question is definitely an iconic scene. Well, in shoe terms. If you’re a SATC follwer, then you probably remember the scene where Carrie enters the Vogue closet and proceeds to basically fan girl. It’s this moment that she spots the “urban shoe myth” that are the Manolo Blahnik Mary Janes: 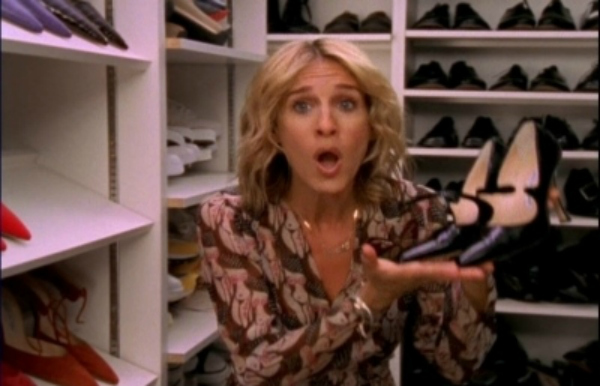 “I think the one that people remember, love and talk about a lot is the moment she sees the Manolo Mary Janes in the Vogue closet and says, ‘Oh my God, I thought this was an urban myth!” I think that was a very funny and clever way of talking about something that is to some, a silly sort of infatuation,” she explained.

“I love the moment when a frantic Carrie insists that even if the heels don’t fit, she’ll wear them anywhere. It’s a perfect example of who Carrie was – determined and unashamed of what she loved.?

SJP added that a similar in-real-life-moment had happened to her before she filmed the scene and this made it resonate with her all the more: ?But then, one time, I did see Manolo Mary Janes in the Vogue closet and they weren’t beaten up. Mine were soaked from the rain, and I had run city blocks in those shoes. When Carrie said that line, I was like, ‘I get it!’?

At the end of the day, she was just a woman who loved a good shoe and what’s wrong with that?

Did you have a favourite SATC moment? Tell us in the comments!