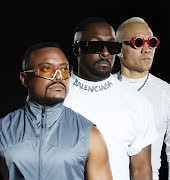 The highly anticipated Sabrina The Teenage Witch reboot is coming to Netflix this October and there’s a burning question on Niamh O’Donoghue’s mind: will she be sartorially savvy now as she was back then?

The original Sabrina (starring Melissa Joan Hart) was a delightfully unsexy show when it originally aired from 1996 to 2003. It offered a glimpse into a pre-adulthood world and we all navigated through busy high-school halls and locker rooms, family crisis’, friendships, matters of the heart, secrets and personal growth with Sabrina.

Unlike other series during that Nickelodeon era, Sabrina wasn’t animated or based on pre-teen anecdotes (Mary-Kate and Ashley Olsen’s Two Of A Kind, for example). She was on the cusp of maturity – though not quite there yet – and, importantly, she was relatable. 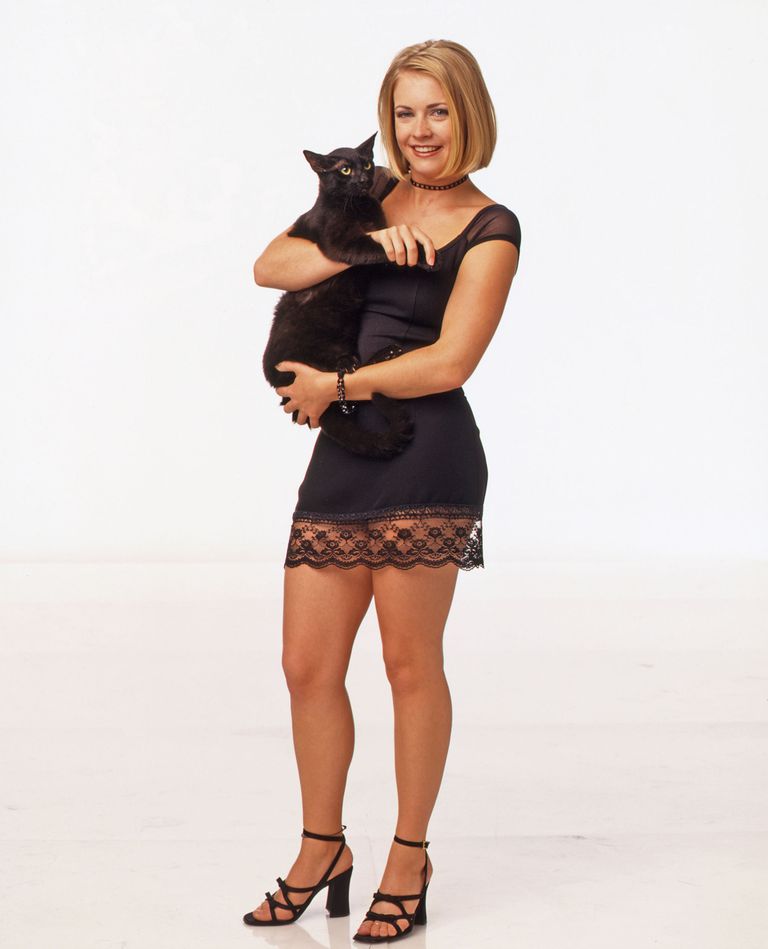 Sabrina approached her special skill-set and wardrobe with a casual attitude. She knew, for example, how to work magic with a kimono, pair together a cashmere cardigan with a Chanel-inspired tweed mini skirt or a cosy turtle-neck and classic black pinafore (and take note of her accessories game; especially the retro, colour-coordinated hair slide). And the best thing about Sabrina’s style was that it was easy to emulate.

ICYMI: The Rugrat’s Angelica Pickles is the accidental style icon of 2018 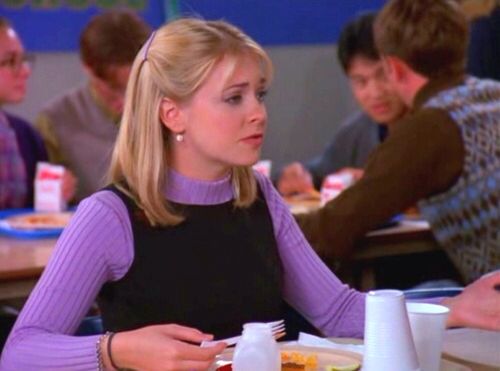 A naturally curvaceous woman, Sabrina embraced her body and used her personal style to accentuate her tummy, legs, arms and cleavage. She wasn’t afraid to wear tight shirts, cropped T-shirts or mini-skirts; which she developed as a kind of uniform as the seasons progressed. Her look became synonymous with her character. She was sexy in a confident, self-assured way and her style was a reflection of that. And if she didn’t like what she was wearing that day, a simple point of the finger transformed her outfit into something more suiting – something every young woman could only dream of doing.

In fact, the whole cast were incredibly well put-together thanks to costume designer Vicky Mulholland. High-school enemy and upper-class snob Libby Chessler, in particular, stoodout for her very blasé and nonchalant, but always glamorous, school uniform. Her style was undoubtedly ahead of her time (case in point below: Libby wearing a blue feather-trimmed knit mirroring Prada’s SS17 catwalk collection and a safari-style shirt similar to Derek Lam’s SS18 catwalk collection) and she came across elegant, cool and suave – everything Sabrina was not. 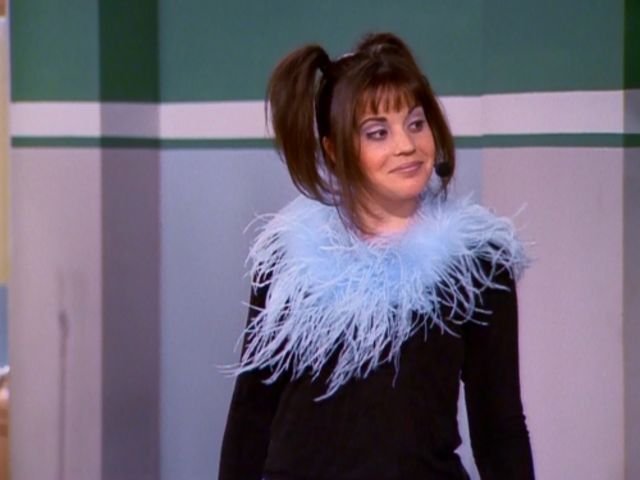 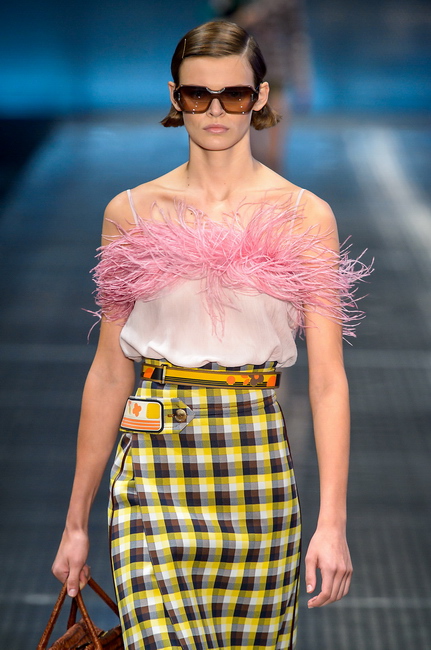 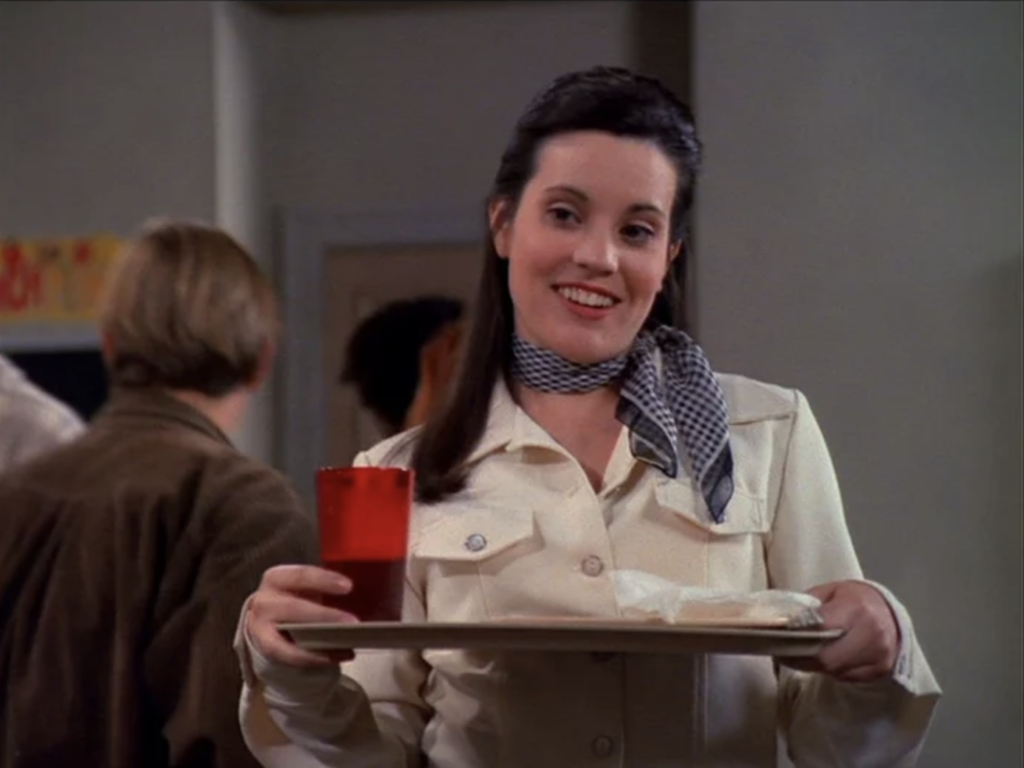 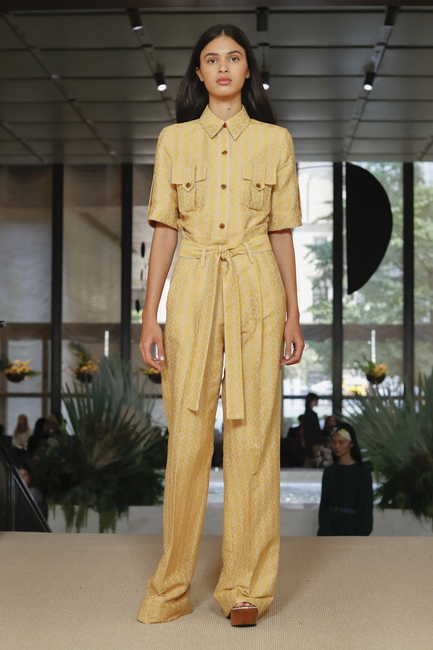 The show was reflective of young adult life and touched on love, sexuality and family. It didn’t push cosmetic surgery, enhancements or dieting in the obvious way that modern television does, but what it offered was constructive guidance and a moral compass in the form of an oppressed black cat called Salem who, in his own right, became a style icon of the show.

When the show tackled issues like body image it did it in a humourous-cum-reality-cum-reflective manner that connected with the viewer (with me, anyway) in a non-preachy way. In one of her most memorable episodes she meets a salesman who sells her magical shakes – diet shakes were a relatively new global craze during the 90s thanks to companies like SlimFast – that instantly slim her down. However, he also casts a spell on her mirror, so no matter how skinny she gets, she only sees herself as someone she needs to change. In another episode, Sabrina gorges on pancakes and becomes severely overweight. Her aunts Hilda (the irrational and emotional one) and Zelda (the rational and intellectual one) warn of sugars highly addictive nature and urge her to break away from it. If it was teaching me, and hopefully countless other young girls, important messages about body positivity without realising it at the time, then it might have just been the most genius parenting tool out there.

For anyone who hasn’t seen the show but might be tempted to take a peek, expect comedy, strangeness, magic, school life and some heartfelt moments. And remember, every member of the Spellman family is born with a twin.