The advertising watchdog in the UK has warned two retailers after they “mislead” consumers by advertising fashion items made from real animal fur as fake or faux.

In two separate rulings published this week, the Advertising Standards Authority (ASA), said a product listing for a pompom jumper by online fashion retailer Boohoo and another for a pompom headband sold on Amazon by Zacharia Jewellers – both which were advertised as faux fur – had broken rules.

Both items were spotted by the animal protection charity Humane Society International (HSI), as part of its investigation into the practice of real fur being sold as fake. According to reports, HSI bought the items and sent them to an independent textile laboratory to be tested. Both were confirmed to be real fur, most likely from rabbits.

“Boohoo’s records showed that a sample of fur from the product in question had passed internal tests. However, given that we had seen evidence that the product obtained by Humane Society International contained real animal fur, we concluded that the ad was misleading,” said the ASA of the ruling. They said the same of the headband sold by Zacharia Jewellers.

Both retailers said they had been led to believe the fur on their products was fake.  Boohoo said it “had a strong commitment against” selling products containing real fur and that the brand had believed the jumper “did not contain real fur”. 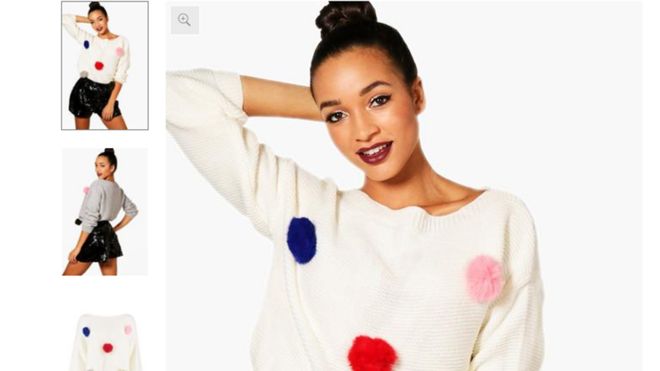 A screenshot of the product before it was removed from Boohoo

Zacharia Jewellers said it had been told that the headband contained faux fur when it bought it in China and was “shocked” to learn otherwise and had taken down the listing from Amazon and removed the product from their website.

How can I tell if the fur is real or fake?

The HSI has the following tips on their website:

1. Check the ends of the fur. Real fur tends to taper to a point at the end of each strand, whereas the tip of faux fur tends to be blunt where it has been cut in the manufacturing process. (Note: This is not fool-proof because any real fur that has been sheared will not be tapered, but this is the exception, not the rule.)

3. The burn test. You can’t do this test in store obviously, but if you already own the item, then simply burning a small sample of a few hairs can be helpful. If it’s real animal fur, it will singe and smell like burnt human hair, whereas if it’s fake, it will melt and curl into tiny balls, and smell like burnt plastic. (Note: Please only conduct the burn test in a safe environment, and on a small sample cut from the main item.)