The Met Gala is fashion’s biggest night out. Every year, the ‘who’s who’ of the fashion and entertainment world convene at the Metropolitan Museum of Art in New York City to put on their best sartorial show… and this year has topped them all.

The theme for this year’s Met Gala was Camp: Notes on Fashion, which was inspired by a 1964 essay by Susan Sontag; who defined camp as, “love of the unnatural: of artifice and exaggeration”.

In fashion terms, this meant over-the-top shapes, exaggeration, and some weird-yet-wonderful ensembles.

Related: Met Gala 2019: All our fashion highlights from the pink carpet

There were fakes heads, candles, grand entrances, and feathers. It was fashion hedonism at its most pungent.

What’s more, there was something there for everyone. Lady Gaga’s four-part pink carpet show will appeal to those who believe in the mantra ‘go big or go home’. Meanwhile, Carey Mulligan’s subtle hint at this year’s theme will entice those of us who feel simplicity packs a bigger punch.

There was most definitely some stand out fashion moments and here are ten of the best.

Our very own Saorise Ronan arrived like she was about to go into battle; dressing as a dragon queen for last night’s festivities. The armour-inspired dress by Gucci (complete with sequins and golden flames on her chest), is quite possibly the look of the night. Its architectural design and sequin overlay tie in with the camp theme without overpowering the Carlow native.

This year, Lady Gaga was co-chair of the Met Gala and if there was a celebrity to commit to the theme, she was the chosen one.

In not one but four outfits designed by Brandon Maxwell, Gaga performed a one-woman show on the pink carpet. She began her entrance in a hot pink cape, moved onto an all-black gown, transitioned to another hot-pink dress (complete with a giant cellphone) and ended with a bra, fishnets, and underwear. She is a style queen and it is time for us to bend at the knee.

Singer Janelle Monae is known for her individual red carpet looks, and her look for the first Monday of May was no different.

The Christian Siriano designed outfit was inspired by the surreal art of Picasso and Dali, as well as Monae’s own love of technology and performance art. Complete with a motorized blinking eye and a hat sculpture, this is a look we won’t be forgetting for a long time to come.

Say what you want about the Kardashian/Jenner klan, but they know just how to work a pink carpet. Dressed as (what some have described as) the wicked stepsisters from Cinderella, Kendall and Kylie Jenner were the embodiment of camp in their Versace gowns. Think exaggerated feather adornments and sequin embellishments.

Lily Collins has been killing it on the red carpet in recent weeks during her promotional tour for her new film Extremely Wicked, Shockingly Evil, and Vile, so it comes as no surprise that she is on our best-dressed list.

Her ruffled white gown with floor-sweeping train and backcombed dark tresses was a wonderful reference to Priscilla Presley on her wedding day in 1967. With camp referenced many times in the realm of fancy dress, her look couldn’t be more on theme. 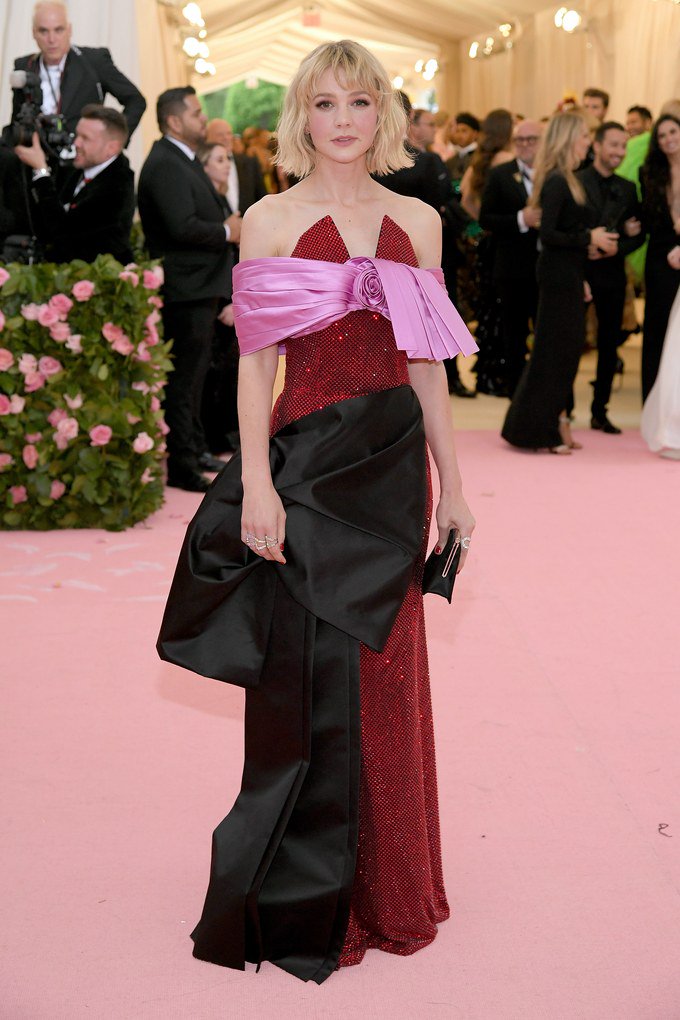 Sometimes less is more – and Carey Mulligan’s Prada creation is a testament to this. The red column gown was studded with ruby-red Swarovski crystals and also possessed a rosebud pink, satin wrap at the shoulders, as well as an exaggerated black satin bow on the skirt. It was understated yet exquisite, and most important of all, the actress looked like herself.

Lupita Nyong’o channelled drag queen extravagance in her Versace column gown which, “was crafted from star-shaped macramé that was enriched with crystals in fuschia tones.” The dress was accompanied by a hand-painted multicoloured organza cape, which completed its accession as the camp dress of dreams.

Speaking to Elle, Jones said he was inspired by Blunt’s turn as Mary Poppins, saying, “So for the Met Ball, when designing for Emily, I was always keeping in mind, ‘what would Mary Poppins like to wear to a Ball?'” We think ‘Mary Poppins, but make it camp’ is a pretty good mantra to live by.

Cinderella most certainly made it the Met Gala in the form of Zendaya. Each year, Zendaya fully commits to the theme and this year she arrived with her very own fairy godmother – aka, her stylish Law Roach. Her custom Tommy Hilfiger gown lit up on the pink carpet after Roach waved his wand and she became shrouded in wisps of smoke. It was stunning and emotional; the kind of moment many girls dream of.

After blowing us away with his Oscars’ outfit, it was no surprise that Billy Porter went above and beyond for this year’s Met Gala.

This outfit is camp. It’s outrageous, vulgar but oh-so-amazing. Porter arrived as an Egyptian Pharoh in a glittering gold bodysuit and robe by The Blonds; flanked by a group of shirtless men who carried him into the venue. This is commitment – outrageously so – but it’s camp and we love it.

Read more: What it’s really like to work at the Met Gala, according to ‘Glamour’ Galway girl

Read more: Can’t get enough of feathers? Me neither – shop these 12 pieces now