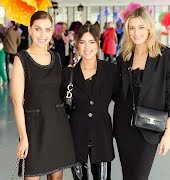 When Margot Robbie walked across cinema screens in?The Wolf of Wall Street, a star was born. The Australian actress’ heady presence and sex appeal was the one of the highlights of Martin Scorsese’s skewed morality tale. Some compared her arrival to that of former-model Cameron Diaz’s in The Mask, a blonde bombshell out of nowhere. However we think Lauren Bacall’s famous debut in wartime movie To Have and to Have Not – “Put your lips together and blow” – is the fairer parallel.

Robbie has some serious acting chops. She’s the female lead opposite Will Smith in upcoming heist thriller Focus, and will be part of literary adaptation Suite Francaise strong ensemble cast. Holding one’s own alongside Michelle Williams and Kristen Scott Thomas? Not bad for a 24-year-old who found her acting feet in long-running soap Neighbours.

As well as finding her place in Hollywood, Robbie has been taking risks on the red carpet, that mostly pay off.

For The Wolf of Wall Street publicity campaign she chanelled the excess of the era in dramatic gowns.

For the high profile New York premiere of the Wolf of Wall Street she wore a black and white Armani dress. Classic power lady choice.

For the London premiere she opted for red Oscar de la Renta. This dress is what we like to call a Statement.

We love this recent casual enough ensemble. Girl loves her monochrome, doesn’t she?

However sometimes taking risks doesn’t pay off. This week saw Maggie attend the Focus premiere in flouncy and sheer monochrome Giambattista Valli that was a little bit too fussy.

However, we don’t she’ll ever live down this Dress she wore to the Logies, Australia’s version of the IFTAs, in 2009. Strictly Ballroom anyone?