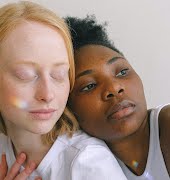 Society isn’t yet accepting of diversifying gender. ?Strict labels are still the norm, either ‘he’ or ‘she’ – we’re still trying to break down the stereotypes of what it is to be the perfect woman or the perfect man. If we became less binary in the way we view gender, perhaps it would it be easier for those who feel they don’t fit into any kind of mould to grow up feeling freer. Influential people and publications have the upper hand; they can start this conversation, start breaking the mould and start establishing gender as a fully fluid concept, rather than segregating it into boxes.

The fashion industry have taken steps when it comes to diversifying, but French Vogue are aiming to go further – they want to take strides. And they’ve always done this: in 1988 Naomi Campbell became the first British model of colour to cover the French publication. In 2007, then-editor-in-chief Carine Roitfeld put Andre J., a black, androgynous model, next to Carolyn Murphy on its November cover, solidifying its status as a?leader in high-fashion glossies that are more than just fashion; they know and care about real issues that will get people talking.

For their next ceiling-breaking move,?courageous move, Editor-in-chief Emmanuelle Alt has given the cover of their French Vogue‘s March issue to Valentina Sampaio, a young Brazilian model who just happens to be transgender. Releasing the cover during New York Fashion Week is a consciously bold move; it will make extra impact, which was, no doubt, the intention as was the fact that it is clearly a political, anti-Trump statement.

This month we are proud to celebrate transgender beauty and how models like Valentina Sampaio, who is posing for her first ever Vogue cover, are changing the face of fashion and deconstructing prejudice. Valentina Sampaio photographed by Mert Alas & Marcus Piggott, styled by Emmanuelle Alt, with make-up by Isamaya Ffrench and hair by Paul Hanlon. Out February 23rd. @emmanuellealt @valentts @mertalas @macpiggott @isamayaffrench @paulhanlonhair @YSL #emmanuellealt #ValentinaSampaio #MertandMarcus #isamayaffrench #PaulHanlon #SaintLaurent

Alt said she looked exactly like her idea of a typical French Vogue beauty, any Vogue beauty; it’s just that she happened to be born a boy, going on to say she felt it was crucial now, to celebrate those who are transgender, but that the real victory will be achieved when the day comes that a model like Sampaio can appear on a magazine cover without the publication needing to mention a model’s chosen gender identity.

“We are living in a world at the moment, what is happening right now, we are stepping back,? she said. ?Instead of being in a constant evolution, which is what should happen, human rights…they’re not going in a good direction. This cover is about the importance of those rights, and that we still need to make progress on an awful lot of stuff.”

And in a time when those in power seeks to challenge the celebration of our differences, the cover is even more of a triumph.

Marianne Smyth, aka @smythsisters, on her spring wardrobe staples