Did the fashion industry ever really move away from ‘Heroin Chic’?

It isn’t fashionable to be high, so why are designers still glamorizing drugs, writes Niamh O’Donoghue

When Calvin Klein entered rehab in the 80s for prescription-drug and alcohol addiction it signalled the beginning of a great change in the fashion industry.  Klein was – and still is – one of the most celebrated and successful American fashion designers and his choice to go public with his addiction flagged a new level of awareness; one the industry didn’t even know it needed yet. Less than twenty years later, the infamous Heroin Chic emerged; a look popularized in mid-1990s fashion and characterized by pale skin, dark circles underneath the eyes, a very skinny body, dark red lipstick and angular bone structure. It was synonymous with supermodels Kate Moss and Naomi Campbell (lest we forget about Janice Dickinson, Drew Barrymore, Marc Jacobs, Paris Hilton), and the world couldn’t get enough of it. Arguably the most controversial trend, it romanticised, popularised and convoluted the role that drugs played in society.

With the exception of John Galliano losing his job as chief designer by Dior in March 2011, few fashion personalities have suffered any major consequences from their experimentation with drugs. We idolized Kate Moss, shunned her when photos appeared of her snorting coke, and readily embraced her again not long after. Celebrity culture – as well as the lifestyle and pressures associated with fame and fashion – rapidly accelerated the industry into a hotbed melting pot of drug and alcohol abuse. In turn, it left a bad taste in the public’s mouth that behind the curtain of every runway show is a schizophrenic mess of makeup artists, designers and models maintaining their light figures with heavy partying and a buffet of substances.

“In the world of high fashion, it’s no longer fashionable to be high”

Designers were basing their entire collections around the Heroin Chic craze, poking fun at the fashion industry while marvelling in profits afforded by a pre-crash economy. But the death of industry idol Kurt Cobain and renowned fashion photographer Davide Sorrenti in the early 90s turned the craze into paranoia. Magazines started to take notice. The industry was forced to change its trajectory for the welfare of models and designers. In 1997, thirteen established designers – including including John Galliano, Stella McCartney, John Rocha, Reynold Pearce and Andrew Fionda – signed a statement expressing their concern at “the waste of human potential caused by substance addiction”, objecting to the industry’s use of the strung-out “heroin look” to promote fashion (independent.co.uk, October 1997). The late 90s arguably marked the end of Heroin Chic and celebrated the arrival of healthier-looking models like Gisele – when abs were in greater demand than gaunt clavicles.

Despite moving forward almost twenty years, the associations of drug abuse haven’t gone away yet. In 2012, Mary-Kate and Ashley Olsen designed an uber-luxury Nile crocodile leather backpack that was scattered with a colourful prescription drug motif. Created by renowned artist Damien Hirst, only 12 of the exuberantly expensive (an astronomical $55,000 each) bags were ever made. It is almost as if it was created out of pure irony, especially considering the Olsen twins’ own addiction issues – not to mention trying to sell an item for the price of a small house after a global economic crash. 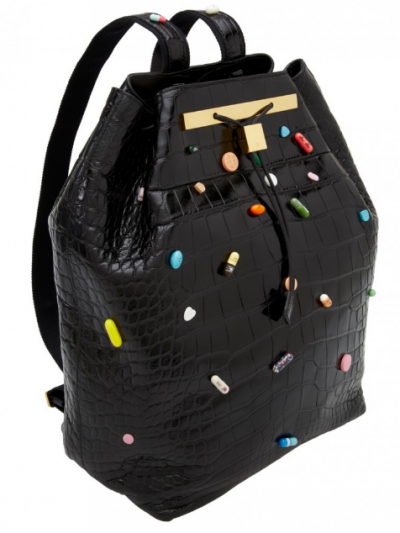 Just two years ago, Moschino was forced to pull its AW16 collection – which included clothes and handbags that look like prescription pill bottles – from retailers over protests that it glamorised and normalised addiction. Retrospectively, it did, and in an age where brands are ubiquitous, there needs to be a level of responsibility for distasteful actions. Alexander Wang’s AW16 collection also embodied the trend with oversized jackets clad in marijuana print. And Raf Simons’ most recent AW18 collection is riddled with drug references. Titled ‘Youth in Motion’, the collection deals with notions of excess and the effects of overindulgence and called attention to the spiralling world of drugs and hedonism. Yves Saint Laurent’s Black Opium fragrance was investigated by the UK Advertising Standards Authority for glamorising drugs – the list goes on. 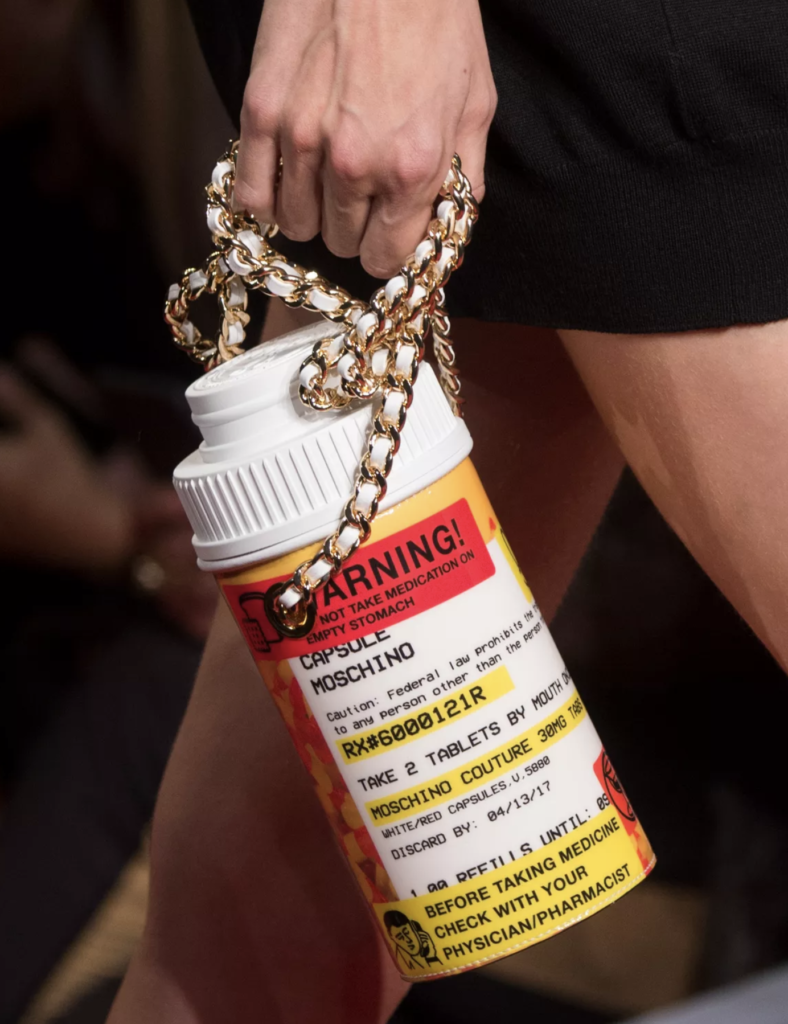 Despite all this, the industry continues to support and idolise labels and designers. And part of the problem, I believe, is our perceived association of what addiction should look like. We don’t associate a Chanel tweed jacket with a person struggling with addiction; nor do we a successful designer, painter or CEO (Coco Chanel’s opioid addiction was finally addressed in An Intimate Life by Lisa Chaney in 2011). Industry pressure is still a prevailing beast, with pressure to design; pressure to sell; pressure to be the next ‘It’ brand. Maybe the answer is to slow down? There’s also the case for casual recreational drug use that was recently highlighted by the #DoYouUseCocaine harm reduction campaign that highlighted cocaine use in Ireland is back to Celtic Tiger levels.

Fashion will continue to be a space for experimentation and even poking fun, it comes with the nature of the industry as a free-spirited, unbound entity. But today’s consumers want more collections faster and cheaper, adding to the burgeoning stress already felt by designers, models and industry workers. When it come’s to drugs though, it isn’t about art, it’s about life and death as the world sorely learned with YSL, Coco Chanel, Alexander McQueen, Calvin Klien…Although Heroin Chic was the trend that defined the 90s, and even though fashion’s enchantment with thinness has surpassed, it remains to be seen whether the industry will get over its fascination with drugs any time soon.