Abercrombie & Fitch have rebranded and are moving away from the exclusionary, elitist brand with predominantly white advertisements they once were, to appeal to an ethnically and racially diverse generation that is no longer interested in bullying.

Abercrombie & Fitch recently deleted all the pictures from their Instagram account, redesigned their logo and website and launched a new marketing campaign. They’ve rolled their new digital campaign across social media, a campaign that has a racially diverse selection of models, who now wear clothes.

The Abercrombie brand has not posted positive comparable sales since 2012. The brand has seen sales drop from $4.1 billion in 2012 to $3.7 billion last year. The rebrand comes under the guidance of Abercrombie &?Fitch’s first creative director of marketing ever, Ashley Sargent Price.

Abercrombie & Fitch have also ended basing their hiring policies on looks and have removed sexualised marketing from all shopping bags and stores.

Abercrombie’s president and chief merchandising officer,?Fran Horowitz, said in an interview with the Wall Street Journal, ?We are a positive, inclusive brand, with a nice sensibility, very different from what [customers] encountered in the past.?

And what customers “encountered in the past” has been pretty bad.

The brand was transformed and then destroyed from 1992-2014 by CEO Mike Jeffries, who is often labeled as an “eccentric” and not often enough labeled as an “entitled, racist, fat-shaming pig in a wig”.

In 2014, Abercrombie set off attempting to alter it’s image by finally including the colour black in their collections. Abercrombie had previously told employees not to wear the colour in store and said in a statement in 2013, “Abercrombie & Fitch does not sell black clothing and discourages wearing it at our home office and in our stores, because we are a casual lifestyle brand and feel black clothing is formal.”

Abercrombie has also received wide criticism for not selling women’s size XL or XXL. Speaking about the exclusionary elements of the Abercrombie brand, Jeffries said, “Are we exclusionary? Absolutely. Those companies that are in trouble are trying to target everybody: young, old, fat, skinny. But then you become totally vanilla. You don’t alienate anybody, but you don’t excite anybody, either. A lot of people don’t belong [in our clothes], and they can’t belong.”

Abercrombie & Fitch has also distributed a combination of tragic t-shirts, sloganed from “Who Needs a Brain When You Have These??, ?Gentlemen Prefer Tig Ol? Bitties?, ?Do I Make You Look Fat?? to “Wong Brothers Laundry Service – Two Wongs Can Make It White”.

Aside from banning black from their clothing line, Abercrombie has been widely criticized for a lack of racial diversity in their employees and the fetishization of whiteness in their advertising campaigns. 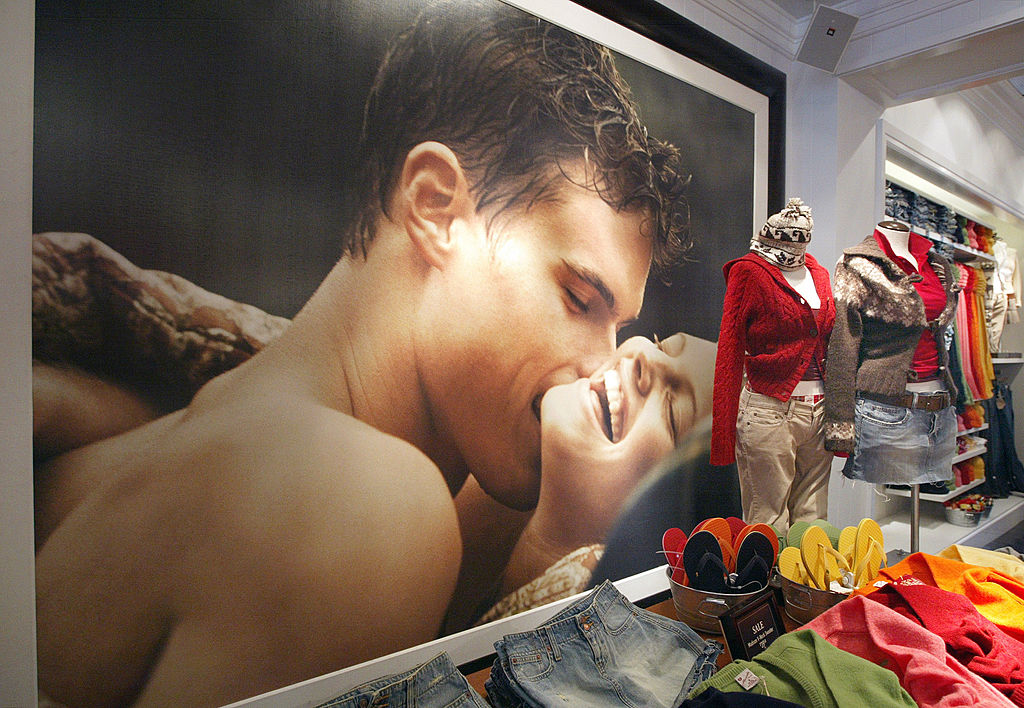 The US?Supreme Court ruled in favor of Muslim woman Samantha Elauf who filed a lawsuit after she was denied a job at an Abercrombie & Fitch Co clothing store because she wore a hijab.

In 2004, the company settled a $40m class-action discrimination lawsuit in the US,?to several thousand minority and female plaintiffs and agreed to hire 25 diversity recruiters and a vice president for diversity and to pursue benchmarks so that its hiring and promotion of minorities and women reflect its applicant pool. The settlement also required Abercrombie to increase diversity not just in hiring and promotions, but also in its predominantly white advertisements and catalogs.

In 2009, Riam Dean, a British student born without a left forearm, won €9,000 from Abercrombie after she was forced to work in a stock-room where she would not be seen by customers.

The new Abercrombie & Fitch website has a section for diversity, which shares this quote from?John Gabrielli, the brand’s Senior Vice President -?Diversity and inclusion are key to our organization’s success. We are determined to have a diverse culture, throughout our organization, that benefits from the perspectives of each individual.?

Now check out the new and very different Abercrombie & Fitch ad, without an ab or naked blonde in sight.

Definitely a change for the better.