Laura Mercier: ‘Irish women have a lot of rosacea problems’

After a tumultuous few years, Laura Mercier, renowned make-up artist, talks to Rosie McMeel about her unrelenting passion for the beauty industry.

Meeting Laura Mercier, I wasn’t sure what to expect. Although she’s a beautyicon whose name adorns some of our favourite products (Secret Camouflage, anyone?), I was less familiar with the woman herself. She seldom does public appearances, rarely agrees to interviews, has never been plastered on a billboardor marketing campaign, and although she’s worked with all the greats – Madonna, Sarah Jessica Parker, Julia Roberts, et al, is incredibly subtle about her own profile. It didn’t help that the make- up I had the wherewithal to apply before catching my red-eye to London had disappeared somewhere between seat 19F and the Heathrow Express. However, if there is one woman who appreciates the less-is-more approach, it’s Mercier.

She built her brand on the premise that every woman deserves to feel beautiful, and that accomplishing that goal is easy if you’re armed with a few basics. Twenty-one years later, her glowing skin and barely perceptible make-up is living proof of the success of her philosophy.

Raised in Provence, France, Mercier began her training at 17 at a painting school in Paris. She soon shifted her focus from the canvas to the face, specialising in skincare and make-up before becoming a freelance make-up artist and moving to New York City in 1985. Just over a decade later, she launched Laura Mercier Cosmetics, grounded in her philosophy of creating a naturally flawless complexion for all ages and skin types.

Now, the brand is one of the most loved and respected beauty lines in the market. However, the evolution wasn’t seamless. Laura Mercier’s first financial backer, Janet Gurwitch,helped to get the brand in 53 Neiman Marcus stores in America – no mean feat for the new kid on the beauty block – but the partnership wasn’t an amicable one. “I was privileged and grateful to be partners; however, we could not have been more different. She didn’t understand my personality or my culture. It was a very big clash of personalities and unfortunately, that diluted down into the business. It was a bumpy road, but it was always interesting, because every challenge is interesting, and I learned a lot.”

They eventually parted ways when they sold the business to Amway, a vitamins company, in 2006. Again, Mercier’s creative flair remained out of sync with the commercial demands, and she made the painful decision to exit the brand that bore her name. She returned to France, thinking it was all over. A year later, out of the blue, a new CEO was chosen for the brand, whose first question was “where is Laura?”, and the founder was invited to rejoin the company. “It was really great. Finally fusing with your partner was wonderful.” The brand, with Mercier at the helm, has once again been sold to Shiseido, but this latest development fills the make-up artist with hope. “I’m excited because they understand make- up, and they understand quality.” the performance of products, so that has given us better creativity today. And then, with so much access to influence online, it makes things more complicated for women. There’s no clear direction to follow; but on the other hand, you become your own creator, and it opens up more flexibility and individuality.”

While she has worked with every A-list celebrity and model on the planet, Mercier remains committed to helping all women enhance their individual beauty. “Make- up seems so superficial, and it is so not superficial,” she explains. “I’ve worked with so many real women, and teaching them how to do make-up well is gratifying. You look at a person who may have a lack of confidence, or may be sick or sad, but when you bring make-up to their face, it instantly helps their mood and boosts their energy. That is very powerful.”

As for the biggest make- up mistakes women make, Mercier kindly overlooks my own poorly-applied face and responds generally.“I’ve noticed Irish women have a lot of rosacea problems. You can trace it to the climate, and up until recently few people were using moisturiser or SPF on their skin. Skincare does so much in terms of prevention. I would say the most important thing is to hide the rosacea or whatever your problem areas. You start there in terms of hiding, but don’t cake everything. If you have red cheeks, your instinct is to apply the coverage everywhere, and what is important to understand is you don’t need to use it everywhere. I want to see your skin, I want to see you. That’s the Laura Mercier way – only apply product where you need it. It’s about the application and understanding what you’re doing.” 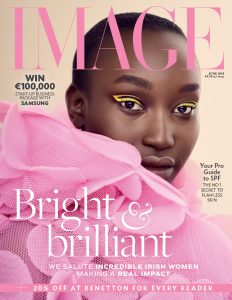 Vitamin C: everything you need to know about the skin saviour