Emotional: The Pirelli 2017 Calendar Is Here

The Pirelli calendar is the stuff of editor’s dreams. We dream of having budgets big enough to hire the very best photographers and to cast incredible women to create striking, iconic imagery. Really – we spend quite a lot of time dreaming of it!

That’s why, when we saw the release of the Pirelli 2017 calendar shots online, we clicked?into it at something resembling warp speed, trying all the while to stem the flow of supreme envy we feel (sorry, I mean admiration). And you can see why…
Each year, the calendar is so well chosen, so appropriate for the mood, and so Goddamn gorgeous that we swoon with professional admiration (aka?envy).

For 2017, the campaign was entitled, ‘Emotional’, and shot by legendary photographer, Peter Lindbergh. Always one of my personal fashion heroes, his images were burned into my memory as a fledgling fashion industry wannabe; I think I may have stared at his shots of the original Supers in THOSE white shirts on THAT Vogue cover in the early nineties for hours on end.

Over the years, he refined his niche and his unique way of shooting in black and white, when all else was colour. He preferred the monochrome?portrayal of the flamboyant fashion industry as it showed up another sensibility of it – something grittier, something more real.

And that is what he has done with this calendar. It features 14 famous actresses including Nicole Kidman, Helen Mirren, Kate Winslet, Julianne Moore and Alicia Vikander among others. And what’s more, it is not re-touched in the slightest – the idea of portraying these women as they truly are, showcases what seems like their true natures – yes, they are attuned to the camera and to playing a multitude of roles, but these look, at least to me, as though they are the women themselves. As they are. A small act of beauty bravery in the ages of filters, image manipulation, and very good lighting.

Yes, they are beautiful, yes they have a world of preening and pampering at their daily disposal, should they choose it, but I maintain that to appear in the raw is brave. And wonderful. And it sets a great precedent. Sure, it’s not new or anything, but it’s good.

Speaking at a press conference in Paris, Lindbergh said,??That’s the purpose of this: to say I don’t accept that image of beauty, which has been created by commercial interests, and to remind us what beauty really is.?

He continued, ?In the time when women are represented in the media, in every way else, as ambassadors of perfection and youth, I thought it was important to remind everyone that there is a different beauty, more real and truthful, and not manipulated by commercial or any other interests. That is important, no? Beauty that speaks about individuality, courage to be yourself, and your very own sensibility. That’s my definition of a woman today. That is the goal of the calendar, to show that woman and not the stretched and manipulated [woman often shown in the media].?? 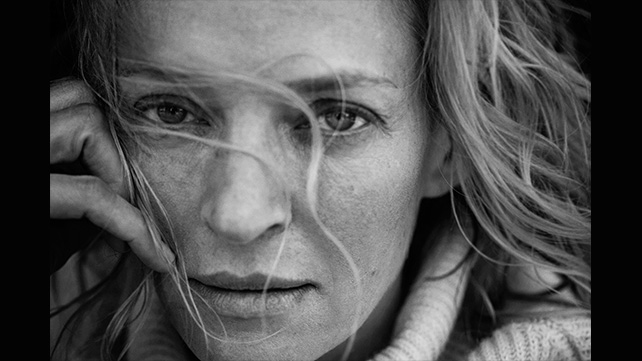 Lindbergh said said he wanted to “not shoot a calendar about perfect bodies but to capture sensitivity and emotion, laying bare the souls of the women in the images, rendering them more naked that a nude.”

The calendar is only available to clients of Pirelli, which is a shame, but we salute it over here in our non-Pirelli -buying-real-lives.

Watch the making of it here…