In honour of breast cancer awareness month, we dig out a chat with Ashley Coffey; a mum-of-two from Dublin who has battled and survived breast cancer twice…

Ashley Coffey, a mum-of-two from Dublin, has battled and survived breast cancer twice. The now 45-year-old was first diagnosed in 2005 and underwent a lumpectomy 10 days before Christmas. After a repeat surgery in January, she started chemotherapy, followed by radiation treatment and brachytherapy. Nine years later, she was diagnosed with a second primary breast cancer tumour. She then underwent a mastectomy and chemotherapy.

The woman in the mirror

Not only was Ashley’s body taking a hit, but her self-confidence also disappeared. “Being comfortable in your own skin has always been challenging for women; I think because we’re so hard on ourselves. We generally have a love/hate relationship with it throughout our lives; at various points for various reasons.

“At 32, with a toddler on my knee, I certainly wasn’t expecting cancer to come knocking on my door,” Ashley confides, “but it did, and there’s no better way to deal with it than head-on.

Related: How to check your breasts at home

“When you look in the mirror and don’t see yourself back, it shakes you. It shocks you. It tears down your confidence,” she says. “What you think and what you see might not necessarily go hand-in-hand.” 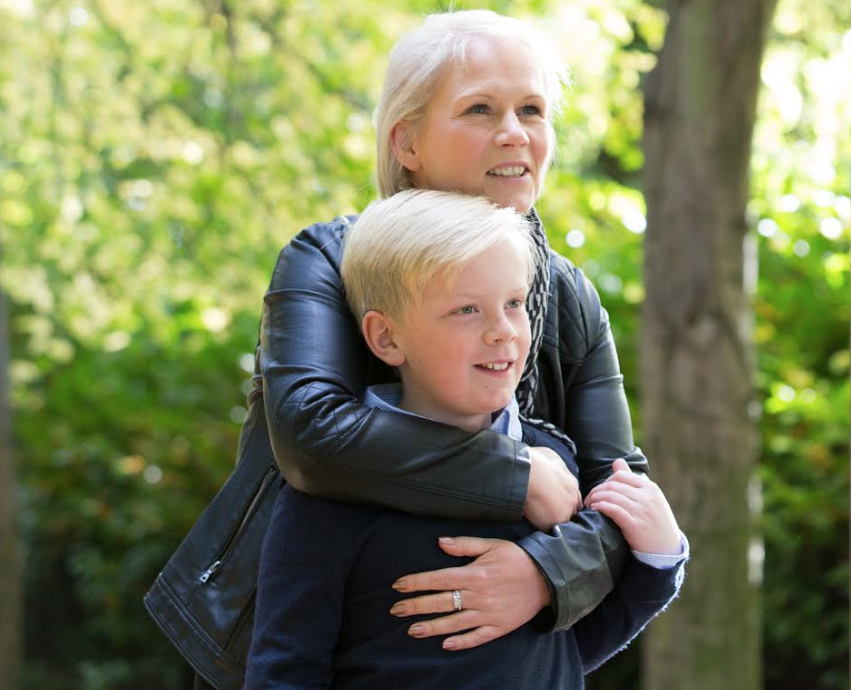 A loss of femininity

Surgery was one thing, but Ashley says chemotherapy was devastating. “I shaved my own hair, knowing this was taking back some little piece of control the chemotherapy had; though it might have had the last laugh, taking my eyebrows and eyelashes.

“Now you look in the mirror and you see a stranger. You’re bald, shiny, bloated, and often unrecognisable. You are a cancer patient and it’s visible to everyone. You look nothing like yourself, so you can’t identify with who you’re looking at in the mirror, because you don’t recognise them. That makes it very difficult,” Ashley explains. “You might walk around with your head dipped, and you don’t want to engage eye contact with people.”

“Although fighting the fight is a priority, not losing yourself in the process is very important…”

“Apart from the visible signs of diagnosis and treatment, there’s so much more that’s hidden away,” she adds. “Any alterations of your femininity – from lumpectomies, mastectomies, hysterectomies – all affect your body confidence on many different levels.

“There has to be a mourning process throughout all this, even though you might not realise it at the time. You’re too busy dealing with life-saving and practical issues.”

Chemotherapy doesn’t just take your feminity, Ashley tells us. “When you’re having your surgeries, nobody knows. Your illness is invisible to those around you, and I guess we all like to blend in,” she says. “But when you look like a cancer patient, everybody knows.

“It’s knowing to protect yourself, but also to appreciate yourself and know that it’s temporary.”

“It might seem like a trivial thing,” she continues, “But I think it’s like your privacy is gone. It’s not just the hair going; it’s what it symbolises. People know that you’re sick. And you can’t just escape by walking into Arnotts or going to town, because you are an advertisement for a cancer patient. There’s no escaping it.”

Cancer treatment changes your face and body, but Ashley found ways to feel like herself again. “Although fighting the fight is a priority, not losing yourself in the process is very important,” she says. “Caring and being kind to yourself is like giving yourself a hug.”

“Those first few wisps of hair that come back are celebrated and start the rebuilding process.”

“It’s a mindset. It’s positivity,” she explains. “It’s knowing to protect yourself, but also to appreciate yourself and know that it’s temporary. Realise how far you’ve come.”

What’s more, Ashley says it’s very important to do whatever it takes to make you feel like you. Whether it’s reconstructive surgery after a mastectomy; wearing a wig; or applying make-up, it’s important to feel good about yourself. Things will eventually return to normal. “Those first few wisps of hair that come back are celebrated and start the rebuilding process,” Ashley says.

“Many cancer support centres realise the effects treatment has on body image and confidence, and they have fantastic ‘look good, feel good’ programmes, which really help,” Ashley says. “I know the Mater runs one and James’ Hospital runs one.”

The Marie Keating foundation also runs free Survive and Thrive programmes, including workshops and seminars to help cancer survivors adapt to their new ‘normal’. They cover everything from coping with emotions, fatigue, changing nutritional needs, managing stress, to physical activity. More information about these events can be found here.

For women struggling with hair loss, Ashley recommends Roches; a family-run business specialising in personalised wigs. “They do wig fittings before you lose your hair,” she explains, “so they can see what you’re like. I think that’s important. They make a wig that matches your normal hair; they can thin it down, or colour it. It’s a very helpful process.”

Advice to those going through it now

As our interview draws to a close, we asked Ashley what advice she’d give to women going through cancer treatment now. She says, “Reach out and don’t be afraid to ask for help. You can’t be expected to go through everything by yourself.

“My neighbours at home would leave a lasagne on the doorstep; people have ways of helping that don’t infringe on your life all the time.

“You’re not alone,” she continues. “There are great groups out there. I have great praise for Arc House on Eccles Street, who have an open-door policy. Instead of hanging around the hospital, I’d nip over there for a cup of tea and a bit of ‘me time’. They’re brilliant.”

Related: ‘Do not ignore this’: Vicky Phelan urges
women to listen to their bodies

“I think I’m a better version of myself now,” Ashley says. “I’m happier than I’ve ever been. I’m doing more of what makes me happy. I’ve given myself permission to do that; as Irish mammies, we often have dinner after everyone else has finished. But I definitely allow myself time now to care for myself; I don’t feel guilty for giving myself a reward.

“Everybody has something that they get up for,” Ashley surmises. “My two boys are my driving force. There was no time to down-tools; it was always about staying positive for them and putting my best foot forward.

“They’re fabulous boys, and they were with me every step of the way. They’re my driving force to this day. I just live for them.”

To learn how to properly check your breasts at home, watch Marie Keating’s video below or click here for more information.

The Undecided: is having children when you’re on the fence more than selfish – hell, is it reckless?