“I had just gone 34… I thought breast cancer was an older lady thing, not something that would happen to me”

We speak to breast cancer survivor and Breast Cancer Ireland advocate Olivia Carpenter about her story and the importance of being breast aware.

As you may know, October is Breast Cancer Awareness month and without their usual means of getting out into the community, Breast Cancer Ireland are taking their campaign virtual, hoping to raise awareness and funds for a disease that is diagnosed in one in nine women, 30 per cent of whom are aged between 20 and 50.

We sat down with Olivia Carpenter, a breast cancer survivor and outreach co-ordinator for Breast Cancer Ireland to hear her story and the importance of being breast aware.

It was 2011 and Olivia was feeling strong and healthy, kept busy with the three “little monsters”, aged 8, 9, and 11, she shares with her husband Gavin. In fact, the day she discovered the lump in her breast she had just completed a 10km charity run with her cousin, Annemarie (check spelling), in aid of the Laura Lynn Foundation. “When I came home, I gave Gavin a big hug and he felt something sticking into his chest,” she explains. Confused, she thought it was just the padding of her sports bra but then she felt it too, a hard lump, like a stone, in her right breast.

“I had just gone 34 and I wasn’t breast aware… I thought breast cancer was an older lady thing, not something that would happen to me,” she said of her initial reaction. Olivia had other things on her mind too. Her father had just been diagnosed with stomach cancer. He had a 10-centimetre tumour and a 2% survival rate, so she freely admits, “I wasn’t thinking of me, I was thinking of him”.

After numerous remonstrations from friends and family, she eventually booked herself into her GP to get the lump checked out. “My doctor is Dr Nicky Boyle in Glengeary, she’s amazing, and she felt it. I’ll never forget it, her eyes waved a bit and she didn’t say anything but I knew by her face, I had been going to her for years.” Dr Boyle scheduled her in for a hospital appointment the following day.

Olivia attended with her husband and the pair were a little frazzled but following an examination by two doctors, both of whom said it was a fibroadenoma or a benign tumour, they were feeling much happier. “I was putting on my coat at that stage thinking happy days and heading on home,” says Olivia, but then in walked a third doctor in scrubs. Olivia sister had phoned a friend who is a surgeon in the same hospital and asked him to look in on her.

He decided to have it biopsied to be on the safe and afterwards, Olivia and Gavin headed off to the States. “We had won a weekend in New York at a charity auction and I’d never been before, I was really looking forward to it,” she says. However, she’s not even sure she left the hotel, too busy calling the hospital to see if they had any results but to no avail. Once back in Ireland, they returned to the hospital, pulled a ticket and found a seat in the waiting room.

A half an hour passed.

“I turned to Gavin and said, ‘there’s nothing wrong with me,’ and he said, ‘no, there’s nothing wrong with you, you’re just panicking’.” Eventually, her number was called and she was brought into a private room. “The only thing I remember about that room was the folder on the table,” she reflects, and then the doctor said, “I’m really, really sorry, you have breast cancer.” 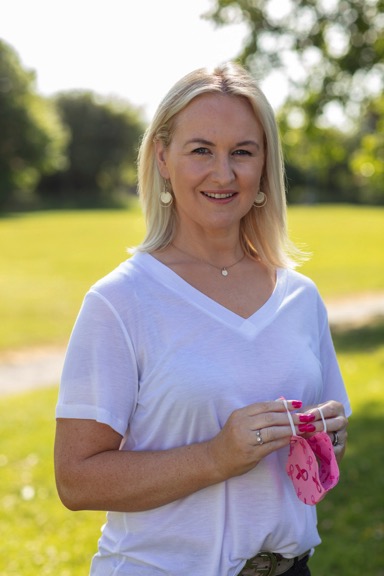 “As you can imagine, my world there and then changed.”

Olivia was diagnosed with HER2 Positive, an aggressive and fast-growing cancer. Her tumour was three centimetres. She underwent chemotherapy and eight weeks of radiation,as well as what she calls a “wonder drug”, Herceptin, which is used to treat this specific type of cancer. She was on one side of the city, her hair falling out, and her dad on the other side of the city, fighting his own battle (which he also, thankfully, won).

“That whole year was just a write-off,” Olivia explains. But the treatment was working and her tumour shrank down to the size of a fingernail. Not one to be kept down, during her radiation Olivia took part in the 2012 Great Pink Run. Scrawled across the back of her t-shirt in her own handwriting were the words “I fought like a girl – and won”, alongside the date she was diagnosed.

Afterwards, she received lots of lovely messages from fellow runners, telling her that their highlight was running alongside Olivia in her t-shirt. Looking out for someone to tell their own story, Breast Cancer Ireland got in touch and the rest, as Olivia says, is history.

Olivia now works as one of the charity’s five outreach coordinators, leading the Breast Health Awareness Education programme. They present to schools and businesses around Ireland with the aim of promoting the importance of good breast health. The free initiative, which is now going virtual with coordinators coming to classrooms via video chat, has the support of INTO, Ireland’s largest teachers’ trade union and is in partnership with insurance broker Cornmarket.

Over a 30-minute presentation, they tell their story and educate on how to perform a self-guided breast examination, as well as highlighting the signs and symptoms to recognise.

The importance of being breast aware

It was only looking back on that pivotal moment, after two doctors had told her there was no cause for concern, that Olivia remembers the surgeon was wearing pink bandana. Now, pink is a sign of breast cancer to her but at the time went completely missed, almost like her diagnosis. Without her family’s insistence that she get checked, without his timely intervention, the result could have been deadly. Instead, she has gotten to New York many times since, and the sights and doing it right.

That is why it’s so important for women to know their own breast, to recognise changes so they can be effective advocates for themselves. Olivia, luckily, had loved ones around her who could advocate for her, but not everyone has the same support.

So whether you notice a lump that wasn’t there before, a puckering of the skin or rash around the breast, sore or bleeding nipples, or anything out of the ordinary, there is nothing more important than an early diagnosis.

Watch the video as Olivia takes us through the eight signs of breast cancer and how to check your breast regularly.

Breast Cancer Ireland’s complimentary Breast Health Awareness and Education Programme is now in an online format, in partnership with insurance broker Cornmarket, and Ireland’s largest teachers’ trade union, the INTO. Schools and organisations can get involved by registering their interest here.

Read more: Breast cancer awareness: how to check your breasts at home