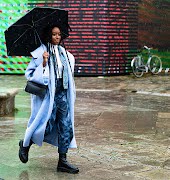 Nicola has invited some pretty famous pals (including some Derry Girls and Bridgerton stars) to join the cast of her upcoming scripted comedy podcast, which she wrote with screenwriter friend Camilla Whitehill.

First rising to fame as Clare Devlin on Derry Girls, Nicola Coughlan has reimagined herself as many a different character since then. From strutting her stuff on the West End to shimmying into a corset, morphing into the role of Penelope Featherington in Bridgerton, and delighting fans as a guest judge on RuPaul’s Drag Race, she’s worn many hats (and wigs) throughout the course of her career – impressing in all of them.

I’ve loved this show for ten years, it was the thing I watched in my saddest times and it always brought me such joy. pic.twitter.com/6JJrXxa5sx

But her talents don’t stop at just acting it seems as the Galway native has revealed that she’s only gone and written her own podcast too. As if she doesn’t have enough on her plate! Titled Whistle Through the Shamrocks, it’s a scripted comedy podcast that she co-wrote with her friend, screenwriter Camilla Whitehill.

Fans and famous faces alike were quick to congratulate the two when the project was announced. Irish comedian Aisling Bea sent her warm wishes in all caps writing “CONGRATS LOVE X”, while the Netflix UK social media team simply commented “talent!” I concur.

The good news is that the duo have announced most of the line up, and it includes plenty of familiar faces. Some of Nicola’s Derry Girls co-stars are on the list, including Louisa Harland, Brenock O’Connor and Paul Mallon, while Bridgerton‘s Ben Miller will also make an appearance.

Queer Eye star Jonathan Van Ness is also on the list, perhaps unsurprisingly as he’s best pals with the “small Irish acting person” (as Coughlan’s Instagram bio describes her), and the twosome recently opened up about their friendship for People Magazine’s 2021 Pride issue.

Describing each other as their “chosen family”, they became friends after connecting online. Meeting IRL a year after the fact, they went to see a Broadway show together and it’s been a steady love affair ever since. “Our friendship really is just so special to me,” Van Ness admitted with Coughlan agreeing and adding, “The fact that our friends and family know one another and have love for one another – that’s incredibly special, and it’s rare in the world. It just means so, so much, honestly.

Coughlan has also announced that another Bridgerton star will be joining the line up, to be revealed next week, so fans will be having fun guessing who it is.

More cast to be announced next week, including an actor from a little show called #Bridgerton, I think some of you may have heard of it…

Follow here to be the first to find out:https://t.co/7oKDK2ipeK#whistlethroughtheshamrocks
???

It’s safe to say we’re pretty excited to tune in. Even the short descriptions of the characters have us intrigued, with the promise of a Banshee, a village priest with a dark secret, and an English landlord set to cause trouble.

An interior designer shares tips on choosing and using rugs