Today is a dessert for dinner kind of day, right? Or at least it will be when accompanied by the pomp and ceremony of Sudi Pigott’s crêpes Suzette.

A timeless decadent dessert, crêpes Suzette always creates theatre when served. The first time I had them served with all due pomp and ceremony was at a dinner dance at The Ritz, where they have been serving the dessert since 1906. It is wonderful to behold: an elegant trolley wheeled to the table and the crêpes impeccably made by waiters with white gloves. They certainly know how to flambé!

To modernise the dish, I’ve made a Suzette butter using a touch of yuzu juice for added zing. The history of crêpes Suzette allegedly dates back to an endearing accident in 1895, although Larousse Gastronomique disputes this story. Edward, Prince of Wales – the son of Queen Victoria and the future King Edward VII – was entertaining some gentlemen friends and one of their French daughters at the Café de Paris in Monte Carlo. They ordered pancakes for dessert, which were pre-prepared in the kitchen, and the orange sauce with liqueur finished at the table by a young waiter called Henri Charpentier (who went on to become a revered chef). The chafing dish accidentally caught fire, but the flambé accident made the dish taste even better. Edward asked for the dish to be named after Suzette, his friend’s young daughter.

I recently tried a rather different flambéed crêpe served with roast pineapple in a caramel sauce with pomegranate seeds, mint and rum at 45 Jermyn Street. This was also served at the table with all due ceremony cooked on a bespoke walnut-wood crêpe-making trolley.

For the Suzette butter

1  Put the flour in a large bowl and add the sugar, orange zest, vanilla seeds and salt. Combine well, then make a well in the centre.

2  In a separate bowl whisk the milk, eggs and melted butter. Gradually add to the flour mixture, whisking until very smooth. Whisk in the liqueur, then transfer the batter to a jug. Cover and set aside at room temperature to rest for 1 hour.

3  Meanwhile, make the Suzette butter. Put the sugar in a bowl and add the orange and lime zests and the yuzu juice. Stir to dissolve the sugar, then beat in the butter and stir in the liqueur. Set aside.

4  Using a sharp knife, cut a thin slice of peel and pith from each end of an orange. Put cut-side-down on a plate and cut off the peel and pith in strips. Remove any remaining pith. Cut into slices, then repeat with the other oranges. Set aside.

5  Heat a crêpe pan over a medium-high heat and, using a heatproof pastry brush, brush with melted butter, then pour in enough batter to evenly yet thinly cover the base of the pan. Cook for 1-2 minutes until lightly golden underneath and bubbles appear on the surface. Flip over and cook for 1 minute. Wipe out the pan with kitchen paper and repeat with the remaining batter, adding more butter to the pan as before. Stack the crêpes as they cook and cover with foil.

7  Return the pan to the heat and add the liqueur to heat. Carefully ignite with a long match, tilting the pan away from you. Be warned, the alcohol should burst into flames. Pour the flaming liqueur over the crêpes. Serve them warm with the orange slices and any remaining Suzette butter to pour over. 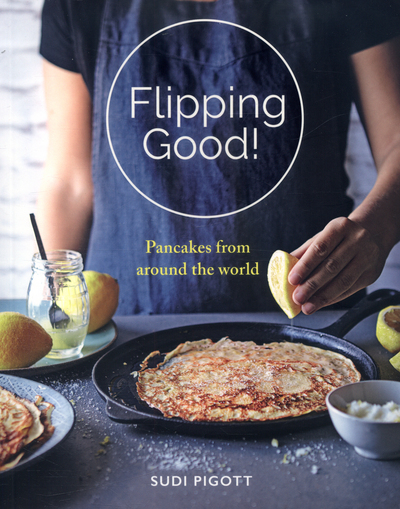