Why Women Don’t Take Credit For Their Own Great Work

Forty-six years after Yoko Ono co-wrote husband John Lennon’s hit ballad Imagine, she is finally being listed as an official songwriter on the track. It’s another grim example of women not being given due credit for their work.?

Say you helped write one of the greatest songs in history. It resonated and touched the soul of millions of people, and it was sung by an outstanding musician – who just happens to be your husband. All brilliant. Except what if the idea for the song was more your idea – right down to the lyrics and melody?- than his, yet he still took the full credit for it? This was precisely what happened in the case of John Lennon’s Imagine. His wife, the gifted artist Yoko Ono, had an equal part in the song’s construction nearly 50 years ago, yet it’s only now that this will be officially acknowledged, according?to Variety.

In a BBC interview with the couple in 1980, Lennon explained that his failure to credit Ono was due to his being ‘macho?: ?[Imagine] should be credited as a Lennon-Ono song because a lot of it – the lyric and the concept – came from Yoko. But…. I omitted to mention her contribution. But it was right out of Grapefruit, her book. If it had been a male, you know – Harry Nilsson’s Old Dirt Road, it’s ?Lennon-Nilsson?. But when we did it, I just put ?Lennon? because, you know, she’s just the wife and you don’t put her name on, right??

Could it be that Ono – having had enough of the backlash for “breaking up the Beatles” – simply wanted to stay out of the public limelight? Was it that she thought it was easier to be nice and give her megastar husband full credit? It could have been this, but it was more than likely due to the fact, that as women, we tend to not demand credit, the same way that men do. For too many women, the hardest part of being successful can be taking credit for the work that they do. Women are natural sharers. We?associate with ‘we’ more than ‘I,’ and as a result, tend to showcase and speak up for ourselves a lot less.

This isn’t just down to patriarchy; Imposter Syndrome, the “likeability” fear, the fact that we feel by’saying “yes, I did that,” is a moral flaw, all contribute. ?And a series of studies last year confirmed that women resist calling attention to their accomplishments when they work in groups with men.?Heather Sarsons, a PhD candidate at Harvard, said she found a bias toward men when men and women co-authored research papers. ?Co-authoring with men was a disservice to women in their work, thanks to a ?co-author penalty.”

Remember at the?San Diego Comic-Con 2016, when?Lauren Haroutunian, the Dean of RocketJump film school, described how the ?Women in Film Production? panel she was on had been hijacked by an elderly male SDCC staffer who?completely took over, answering his own questions and plugging his own program?

Or when ‘Big Eyes’ artist Margaret Keane,’revealed that it had been her, and not her husband Walter who had?painted the thousands of paintings he took credit for. He didn’t paint a single one (as proved in court) but continued to lie about this until he died at 85.

How many times has this happened to you, albeit in a less extreme manner? How many times have you felt like you were being pushed aside when someone (usually a man) tells you they’re just trying to help? And in response, you end up thanking?them? You’re all sugar and spice when what you should be is asked to leave work on account of your rage. I’m forever apologising to the person who, for example, spilt his hot coffee on me on the train – he moved seats and I felt guilty that I made him feel bad and move for scalding my skin. But I know why I act that way. It’s because I like being nice, hate confrontation and (most of the time) want an easy life.

Hearteningly, most others act this way too. Mandy Kaling sent “apology cupcakes”, and Lena Dunham only stopped saying sorry because Beyonc? told her to. But it doesn’t stand to us, always having “polite mode” on. Hilary Clinton felt like she couldn’t step outside convention AND be a woman during her presidential campaign; she was even criticised about the way she smiled during the debates.

So, what’s the solution? I was advised to “act a little bit bitchier,” something that frightened me initially. Because bitchiness is deemed yet another female-only trait when really you mean to be?authoritative. But what’s wrong with standing your ground and unleashing your inner bitch when the occasion calls for it? If in doubt, please remember these words from Madonna, who never takes the terminology as a negitive. And should you ever write a hit song – or anything else of your own – make damn well sure you don’t wait 50 years to get the credit for it. 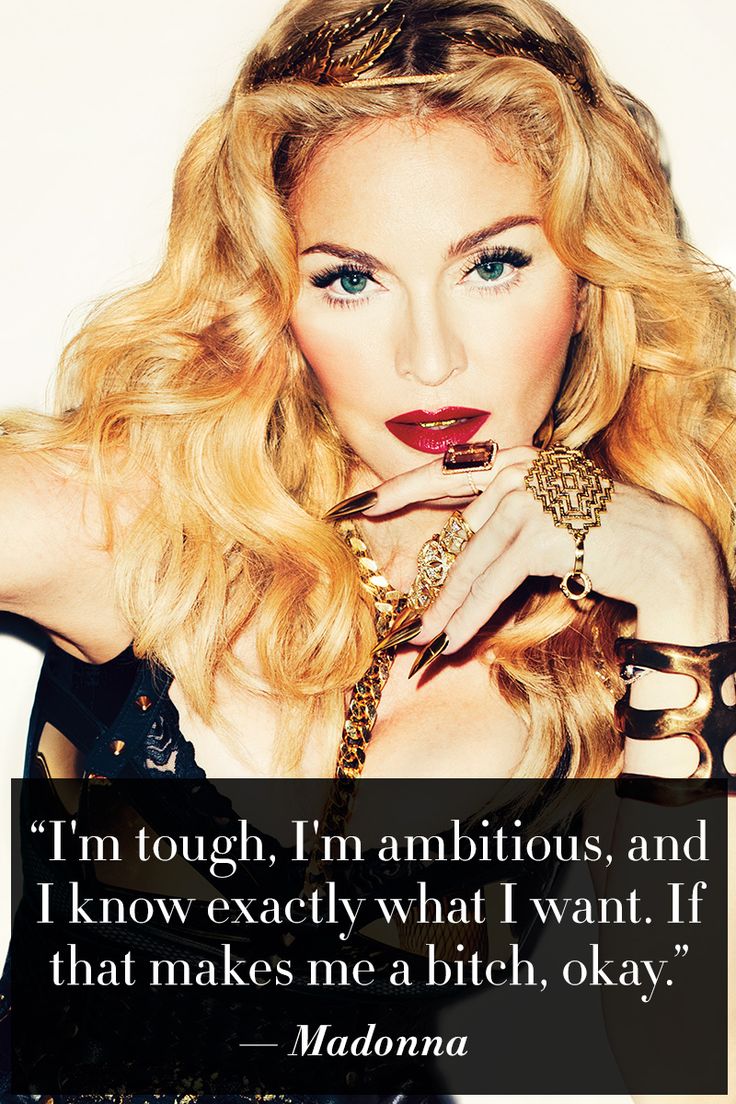