On the Friday evening of September 15, the announcement of the winners of the IDI Design Awards 2017 took place at the Meeting House Square. The highly anticipated 19th Annual Awards were announced by this year’s IDI President, Kim Mackenzie-Doyle.

With a total of 400 entries, this year’s IDI Awards was a large competition. A panel of prestigious judges had the hard task of choosing?who will be the final winners, amongst a broad scope of very talented people in the Irish creative field. In the 19 categories of the competition, ?there was plenty of amazing projects to be noted, some of which we’ve profiled below.

Diarmaid Gavin?was awarded the most prestigious award of the event, presented by IDI President, Kim MacKenzie-Doyle (as seen in the above image). His extensive career of creating beautifully structured outdoor havens has earned him the gold medal in the notable Chelsea Flower Show?in London’s Vincent Square in 2011. 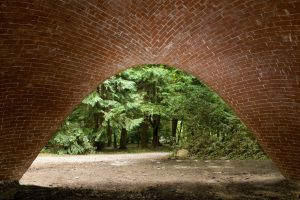 Rae Moore‘s Funicular Folly is now a permanent structure that can be found in the beautiful woods of?Ballinlough Castle,?where the annual?Body & Soul?takes place. The theme set out by the festival in which Rae followed was ?Second Skin: Transformations and New Beginnings?. The structure, using reinforced concrete, bricks and local Irish clay adopts a curved form and tent-like shape. 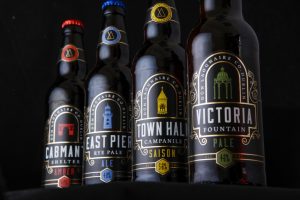 Clickwork‘s relocation to the beautiful seaside town Dun Laoghaire, became the major inspiration for these award-winning label designs. The town’s eclectic mix of old and new architecture and key monuments have been the main drive of influence for the design team’s leader, Rory Dowling. Each bottle is imprinted with Dun Laoghaire’s town hall, East Pier lighthouse, victorian fountains and lastly the Cabman’s shelters framed by the crafted ironwork found in People’s Park.

This interior, designed for Irish company, Iconic Office by?Kingston Lafferty Design?would definitely make you want to come to work everyday. There is nothing mundane about this office space. Not only is it vibrant with colour (and plenty of plants), but there’s also tons of quirky furniture and light fixtures that still serve the space’s functional purpose in this young, dynamic workplace.