Why Judi Dench is the poster woman for positive ageing

From becoming a TikTok star to being the oldest woman to ever grace the cover of Vogue, the 85 year old thespian shows that age is no barrier to living life to its fullest.

Even amongst celebrities, only a select few ever get to call themselves Vogue cover stars. Judi Dench has been added to that list as she appears on the cover of the magazine’s June 2020 issue, looking radiant in Dolce & Gabbana. The prestige makes her the oldest person ever to grace the cover, but it’s just one of the many impressive things the 85 year old has been up to recently, showing that she’s not letting age slow her down.

Although poor eyesight means she can no longer do theatre, where she started her acting career and gained a reputation as one of the greatest actors of her generation, she still regularly appears in films, such as Tom Hooper’s 2019 film adaption of Cats.

She hasn’t seen the film in full yet, but was not impressed by how her character turned out in post-production. She tells Vogue that she had hoped she would appear elegant, but instead looks like “A battered, mangy old cat — a great big orange bruiser. What’s that about?” 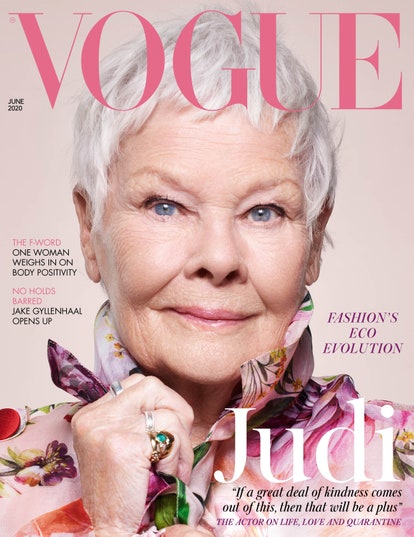 Outside her acting career, Dench is also clearly uninterested in stereotypes of what people her age should and shouldn’t do. She got her first tattoo on her 81st birthday, and it sums up her attitude perfectly: “Carpe diem” reads the message on her wrist.

Thanks to her family, she has also become something of a social media star. Dench has featured on several of her grandsons now viral TikTok videos, telling jokes and dancing.

She also caught everyone’s attention on her daughter, Finty Williams’ Twitter account, where she appeared at the start of lockdown, telling us all to “Just keep laughing”.

Although she is clearly an example of someone determined not to let her age hold her back, Judi Dench is not afraid to talk about the difficult aspects of  ageing. When asked about the idea of retirement by Vogue reporter Giles Hattersley, she exclaims, “No, no, no, no. Don’t use that word, Giles. Not in this house. Not here. Wash your mouth out!”, and she quotes Dylan Thomas’ “Rage, rage against the dying of the light”.

On the subject of getting older, she says “I don’t like it at all. I don’t think about it. I don’t want to think about it.” Because of her deteriorating eyesight, the actor had to give up driving a few years ago, and describes how she hates to be dependent on other people to get around.

Her daughter, however, says that appearing on the cover of Vogue definitely gave Dench a lift. “This age thing, I think, affects very much how she feels about herself and this gave her just that little boost of confidence to make her go, ‘Oh, maybe I’m still OK.’ Then of course after the photoshoot, she came back literally thinking she was Beyoncé.”

And we’re glad she did, as Dench is certainly akin to Beyoncé in the world of acting, a superstar that is beloved by people across demographics, such is her power. We hope she’ll keep appearing on our screens for as long as possible.

Read more: #MetGalaChallenge: our favourite online efforts to recreate the First Monday in May

Read more: IMAGEWrites: Turns out we weren’t really ‘dressing for ourselves’ all along

Read more: Sipping a cocktail in a dressing gown during lockdown? Let’s all be more like Meryl Streep