Why Are Women Still Insulting Each Other Online?

Yep. Just when you thought that women of the world were united in peace and harmony, science proves otherwise. According to new research carried out by Ditch The Label and?Brandwatch, between America and the UK, misogyny, sexism, and general hatred that women experience online does,in large part, come from other women.

Let that sink in for a second:?In 2016, the highest amount?of hateful tweets directed at women came from other women. What is that saying about us? Who is to blame? We seem so caught up in the #FeministMovement?and working for positive change, but maybe we need to reevaluate ourselves first before handing the blame baton to someone else.

Over four years, a mammoth 19 million tweets were analyzed to find out what kind of language was used, how it was used, and who it was used by. From this, researchers were able to determine that 52 percent of all misogynistic?tweets were sent by women during this time – which is causing us a great deal of concern because it’s a clear indication that we’re blindly?continuing to allow society to create impossible standards for women – which obviously has profoundly negative consequences.

What are women saying?

Founder of?Ditch the Label?Liam Hackett says that women most often insult other women about their appearance, which comes as a surprise considering so many global brands are campaigning for body positivity and self-love (such as the Always #LikeAGirl campaign and?Lonely Lingerie). ?In fact, we’re so fond of insulting one another online that women in the USA and UK?the highest users of the words ‘slut’, ‘hoe’, and ‘bitch’ (among others) on Twitter. Perspectively put, 27,336 tweets were sent during the research period by women containing the word bitch. In a world where we’ve challenged perceptions, fought for freedom, and protested for our rights, isn’t it time that we hung up the bitch cloak and channeled our energies for greater good? 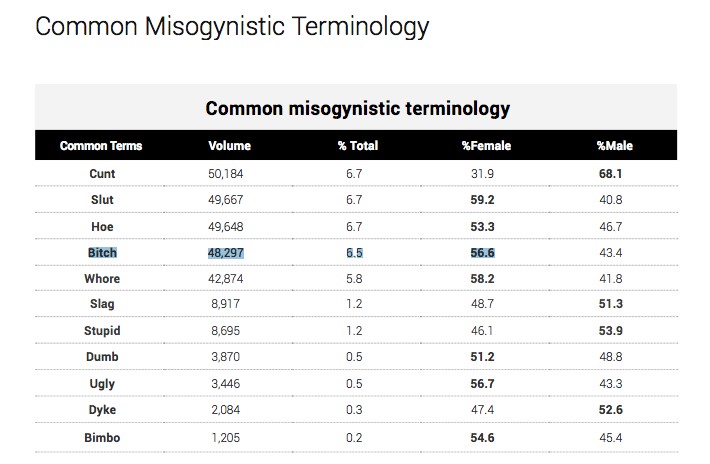 We really have no justification for directing hatred or devaluing another person – whether male or female (unless, of course, you’re Donald Trump). While the results of this study are shocking, it does offer?us a unique insight into how our world is developing and behaving; particularly when female empowerment is highly encouraged that it all seems like a bit of a conundrum. We hope that these findings will spur?us to stop and think before typing, and prompt us to be nicer to one another. Fellow sisters, I urge you to put aside your jealousy and insecurities. After all; isn’t it nice to be nice.