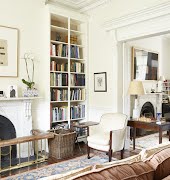 The Charles sofa is by B&B Italia. The wood-burning stove is by Antonia Citterio. The PK 1 leather chairs are from Coexistence.

Dubliner Cathie Curran was destined to become an architect. An early interest in architecture was ignited when her father, who was then a builder, took her on a site visit. ?There was this brown velour carpet, and I remember thinking how truly ugly it was,? she says. ?I used to pore over plans as a child.?

Cathie’s strong aesthetic sensibility and attention to detail is clear throughout her beautiful London home, which she shares with husband Vincent and twin daughters Clara-Rose and Annalivia. With meticulous attention to detail and a great deal of imagination, Cathie has transformed ?a rancid rooming house? that was rotting with neglect into a sleek and contemporary home. ?I think the roof was the only thing we didn’t have to replace,? she says.

The spacious three-storey Victorian residence provides an ideal place to raise a family, although configuring the re-design was no easy task. The rear ground floor was extended sideways and into the garden, to allow enough room for all the living areas on one floor. Each zone of the open-plan house flows fluently, but can be conveniently closed off by hidden sliding doors.

The design’s success owes as much to the clever layout as it does to the functional details, as virtually every item in the house has a designated home. Clothes hang behind pristine cupboards, shoes slot into drawers, and even the loo-roll sits snugly it its perfectly carved ledge. It’s safe to say, we’re rather jealous.