The coronavirus pandemic might be giving us unmeasurable anxiety and grief, but the good news is that nature is thriving thanks to much less human activity; a vivid emergence of wildlife that, if we learn anything from the crisis, we must lobby to protect, and maintain, in our post C-19 landscape. Here are some of the best resources for virtual twitchers, guerrilla wildlife filmmakers and vegetation voyeurs. 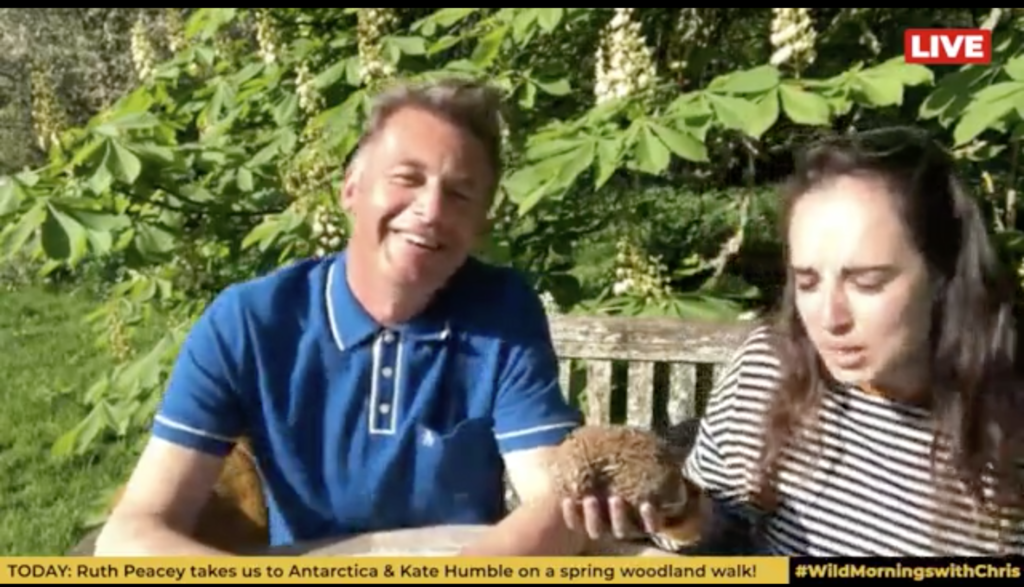 The British naturalist with a penchant for punk rock has been informing and entertaining TV audiences since his Really Wild Show days. And until Springwatch returns to BBC Two on May 26, Packham has fans flocking (sorry…) to his Facebook page at 9am every weekday, where he and his stepdaughter Megan McCubbin broadcast live from self-isolation in the UK’s New Forest.

Boasting more drama than an entire series of Succession, the approx. 45-minute shows are a fascinating interactive mashup of live video links with wildlife photographers, conservationists, zoologists, nature writers, lobbyists and hobbyists, each of whom report live from their own back gardens, aviaries or farms.

The pair also share user-generated content from the Self-Isolating Bird Club community – set up by Packham, to help provide “respite and solace in nature” during the lockdown – such as raw footage of hand-fed robins and night-cams of scrapping hedgehogs. There are live audience interactions aplenty, too, including good old-fashioned birthday shoutouts, competitions and real-time questions answered.

As well as the banter being highly amusing, the show can be occasionally horrifying: I nearly repeated my porridge when they showed a clip of a seagull snarfing a whole rabbit.

Diehards take note: Self-Isolating Bird Club will be on hiatus from May 19, while Packham and McCubbin present a pre-Springwatch online series every weekday at noon, on the programme’s social media channels. However, they’ll be back post-Springwatch, with their unfiltered wit and wisdom.

Strange things buzz about the brain during lockdown and one of the things I Googled was “birdsong app”. And to my delight, came ChirpOMatic, which is essentially a bird version of Shazam, identifying more European birds than you know even exist.

It’s dead easy to use: if you don’t know one tit from another, hit record and the app will process an 11-second audio clip and deliver the closest matches, which you can then select to build a daily audio map of different species. Invariably it’ll pick up the calls of more than one bird – many birds sound deceptively similar – so you’ll be able to distinguish between, say, a jackdaw and a rook within no time and feel surprisingly smug for it.

Chirp! is ChirpOMatic’s sibling app and has more in-depth profiles of each bird that can be grouped into categories, such as Habitat and Song Style. It also has a compendium of signature calls – but no record option, which is why you need ChirpOMatic for Shazam-style amusement.

Between 2007-2011, 100 eagle chicks were brought from Norway and released in Killarney National Park, as part of a reintroduction programme to bring them back from a century of extinction. They have since dispersed around Ireland, with up to a dozen pairs breeding in counties Cork, Kerry, Clare, Tipperary and Galway currently. And one such pair is thriving on Garnish Island, off Glengariff in West Cork.

A nest-cam was set up by the National Parks and Wildlife Service literally a few days before the first of two white-tailed eagles eggs hatched on April 15 whose fluffy, wobbly head we can all enjoy online, along with its sibling, who hatched four days later.

Feeding times are a pleasure to snoop at, and offer hope for the eagles’ future survival in Ireland. To achieve long-term viability, between 10 and 15 breeding pairs will have to produce up to two chicks per year. At the time of writing, the male eagle is nowhere to be seen, leaving her to raise her chicks as a single parent: here’s hoping he’s simply philandering and hasn’t perished.

And lest we forget that hatching is perhaps the easiest stage of a chick’s journey: Eddie the Eagle, who was born on the island in 2016 and found dead on the Dingle peninsula two years later, due to poisoning. But, perhaps one silver lining of decreased tourism during the C-19 crisis is that nature might have better odds of survival.

The Burren is as much a state of mind as a geographical place and a new TG4 series starting on May 13 explores the commonality between locals and landscapes over four seasons.

Spring, summer, autumn and winter have an episode each, revealing its own trials and tribulations from Crusheen in the east to Doolin and the Cliffs of Moher in the west. Directed and produced by Martina Durac for Phoenix Films, narrated by Diarmuid de Faoite and set to an atmospheric, original score, the series is a guaranteed stress-soother.

As well as documenting the native wildlife over a 12-month period, the Burren’s stories are told by its custodians, among them Sinéad Ní Gharbhaith who runs The Cheese Press In Ennistymon, botanist and instrument maker Eugene Lambe who arrived from Dublin many years ago and now lives just outside Kinvara, making uilleann pipes and flutes, farmers Annie Nolan and Pat Nagle and fisherman Rainer Krause, who arrived from Germany over 50 years ago and never left.

The beguiling An Bhoirinn broadcasts at 9.30pm every Wednesday night, with repeats on Sundays at 5.40pm.

At first glance, the most recent easings of lockdown restrictions weren’t exactly radical. However, for the only-70s and the medically vulnerable, it was nothing short of seismic, with formal permission to come out of confinement and into the great outdoors for some fresh air after many weeks of advised, though not mandatory, cocooning.

So if they don’t already know, tell your parents and grandparents: Dublin’s four local authorities have come together to create a designated two-hour slot exclusively for cocooners looking to exercise in their local parks every 1.30pm until 3.30pm. All other users are asked to visit at other times so that those cocooning can have as much space and confidence in physical distancing as possible.

The Chelsea Flower Show has been held in the grounds of the Royal Hospital Chelsea, London every year since 1913, apart from gaps during the two World Wars. Eighty years on, the famous horticultural event is on another break.

But what the coronavirus taketh away this May 18-23, the Chelsea Flower Shower is giving back, hosting a virtual iteration that will reach even more green-fingered fans than its 168,000 annual real-life guests.

Every day from May 18, exclusive videos and articles from regular Chelsea exhibitors and RHS advisors will be interspersed with tips from household-name designers, florists and gardening personalities, and also tours of their own private gardens. There’s also a daily School Gardening Club, helping parents and kids grow plants and reconnect with nature en famille.