Fans of our very own Michael Fassbender should get very excited as at long last, the first official trailer for the anticipated Steve Jobs biopic is here. We’ve only seen a snap or two of Fassbender in the Danny Boyle directed film up to now, and the trailer gives us a chance to see him sink his teeth into the role, which details the Apple Co-founder’s (often controversial) life and career.

Written by The Social Network‘s Aaron Sorkin, the film is based on Walter Isaacson’s biography of the innovative technology creator,?who passed away after a long battle with?pancreatic cancer in 2011. With Sorkin on board as screenwriter, Boyle directing and with a big name cast -Kate Winslet stars opposite Fassbender as co-worker Joanna Hoffman, while Seth Rogen plays his business partner Steve Wozniak – we’re expecting great things from the movie, which is set to hit screens in November. Jobs, despite inspiring many for his truly ground breaking?work with Apple, didn’t lead a life as green as grass, or at least the trailer tells us a something about this. 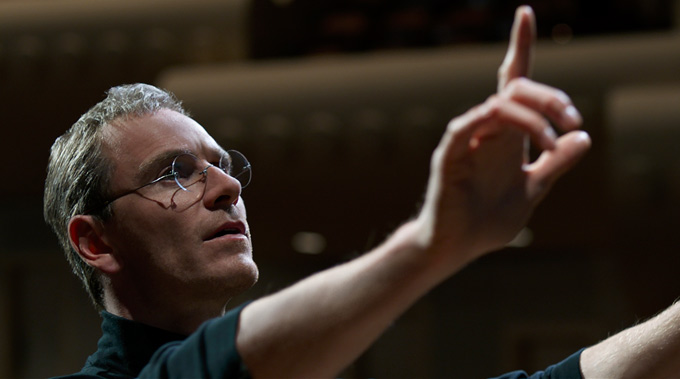 The short clip sees his partner complain that Jobs is taking all the credit for the work others are doing and shows how?for years,?he refused to acknowledge his daughter Lisa, who he fathered with high-school sweetheart and Apple co-worker Chrisann Brennan.?While we agree with some of the comments that Fassbender isn’t a ringer for Jobs in the looks department, we think his accent is spot on and know that his talent’means he’ll shine in the role regardless.?

Are you looking forward to the film?