My trans child: ‘Everyone’s journey is different, but seeing your child happy is every parent’s ultimate goal’

The Trans community is one of the most marginalised groups in the world, yet international research points to about 1 per cent of the population feeling or expressing some form of gender variance. Amanda Cassidy speaks to parents and children in the Irish transgender community about perceptions, transphobia, acceptance and respect.

Catherine Cross says that, looking back, there were a lot of pertinent signs that her child had some innate masculine traits, despite being born biologically female. Lucas, the name her son chose when he came out as a trans man, was named Lauren at birth. Catherine, from Kildare, says as a toddler he always tried to use the bathroom standing up and was a real tomboy.

“These are family memories that we can’t erase”.

She says it took a while to get her head around her child’s female-to-male transition, and that it was hard not to feel like she was losing her daughter as well as gaining a son. “I did a lot of crying and soul searching. It makes you reflect on the type of person you are – especially as a mother. It is such a complicated feeling – I used to ask myself: why am I crying when Lucas is so happy?

“It can feel like a bereavement in some ways. I used to find it very difficult to look at our family videos from when Lucas was Lauren. It was important to me that we kept up some old photos, with Lucas’ permission, because you can’t deny what came before. These are family memories that we can’t erase. We now focus on reframing Lauren as the strong and positive person who enabled Lucas to come out.”

Catherine says her initial fears were about the challenges that lay ahead for her son. “At first, you are hoping it is a phase. You want your child to be happy, lovable and employable. Being transgender isn’t an easy route for everybody and of course, I wanted the easier route for my child. I was afraid that making such a public announcement and presenting their gender would impede their life in some way. I’ve come to realise that this is what makes Lucas happier and he has all my support.”

Catherine says she is enjoying seeing Lucas growing into his true identity. “As a family, we have formed really positive bonds. We have to be a strong team. Sometimes parents who struggle with a child who questions their gender are perceived as unsupportive, but everyone moves forward at their own pace and as long as you are all communicating openly and honestly, things will get easier.”

Lucas has been undergoing hormone treatment since he was 18, which Catherine says has given him an inner confidence. “Hormones aid the visual impact of presenting as a male. He is now like any other 21-year-old. He has great friends, he is in college and has a part-time job. Everyone’s journey is different, but seeing your child happy is every parent’s ultimate goal.”

‘Just a little respect is all we want’

Chloe and Jamie O’Herlihy are from Cork City. The sisters were born male but both made the decision to transition to live their lives as women during adolescence.

“We wanted realism. We wanted to show that you don’t just click your fingers and everything changes. It is mentally and physically draining.” 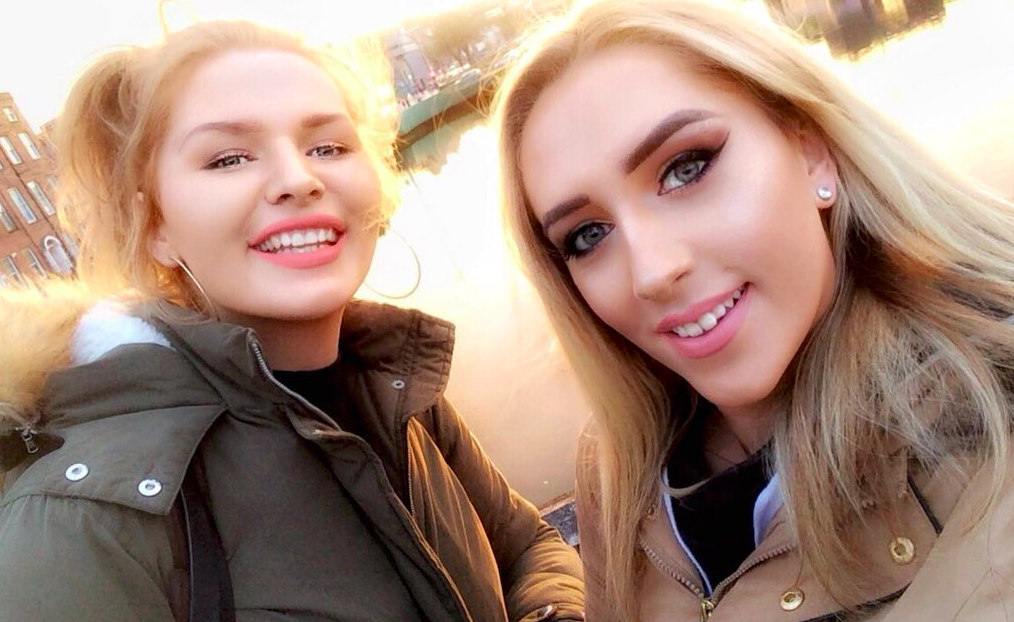 Jamie, who kept her gender-neutral name, says that when she decided to come out as trans, she and her sister had nobody similar to look to for guidance.

“There were no Irish role models at the time. We knew all about Caitlyn Jenner, but it seemed like money and celebrity made her transition seem a lot easier than it is in reality. We wanted realism. We wanted to show that you don’t just click your fingers and everything changes. It is mentally and physically draining.”

Jamie, who runs a popular YouTube channel, says she is now happier living as a woman, but it isn’t without its challenges.“Whether we like it or not, society judges us in a different way. We’ve been called nasty names in the past but I’d like to think we can change perceptions and help others to understand that this is a tough path.

“All we are asking for is a little respect. Respect not to misgender me. Respect to not think my sexuality is fair game for intrusive questions. There is not enough respect in the world in general – but I think to focus on that it is a good start.”

A disorder of the mind no more

But even those who are fully supportive don’t always get it. Stephen O’Hare is the CEO of Transgender Equality Network Ireland. (TENI) “Some still see trans people as a boy who turned into a girl, instead of a girl who was born a boy,” Stephen says. TENI was formed to normalise the issue of gender identity and to offer support and information.

He says long-awaited and positive changes are on the way. “The recent decision of the WHO to remove defunct references to gender identity disorder marks a turning point in the global perception of gender identity. The UN’s directing and coordinating authority on international health has finally confirmed what has long been recognised by trans and gender variant people everywhere – that being trans does not mean having a disorder of the mind.

There remains significant work to fully de-pathologise the lives of trans and gender variant people, but changes like this mark significant steps forward.”

In July 2015, Ireland became the fourth country in Europe to welcome trans rights, behind the UK, Malta, Spain and Denmark when the Gender Recognition Act was passed. It also means anyone in Ireland can change their gender without medical intervention or State assessment. People may legally change gender through self-determination.

TENI offers peer-to-peer support groups and its website offers useful resources for parents, individuals, or those looking for more information about what it means to be gender variant. Some of the correct terms associated with gender have been updated and include:

Androgynous or androgyne: A person whose gender identity is both male and female, or neither male nor female. They might present as a combination of male and female or as sometimes male and sometimes female.

Bigender: A gender identity which can be literally translated as ‘two genders’ or ‘double-gender’. These two gender identities could be male and female, but could also include non-binary identities.

Gender variant: People whose gender identity and/or gender expression is different from traditional or stereotypical expectations of how a man or woman ‘should’ appear or behave.

Non-binary: An umbrella term for gender identities that fall outside the gender binary of male or female. This includes individuals whose gender identity is neither exclusively male nor female, a combination of male and female or between or beyond genders. Similar to the usage of transgender, people under the non-binary umbrella may describe themselves using one or more of a wide variety of terms.

Sex Change: Generally considered derogatory; this phrase has been replaced by the terms ‘transition’ or ‘surgery’.

Many of those I spoke to pointed out that surgery to alter the functioning of existing sexual characteristics isn’t always a given. Some trans people undergo surgery to align their bodies with their gender identities. Other people do not undergo any surgery for many different reasons. The terms ‘post-op’ or ‘non-op’ are considered to place too much emphasis on genitals as a marker for gender identity. Similarly, the term Tranny may be highly offensive to some, although others do use it comfortably as a self-reference, but consider it derogatory if used by outsiders.

Jamie says she wishes she had been able to transition even younger. “I felt so lost before. It was very bleak. I couldn’t even picture myself as an adult, life was so hard, even though I had an amazing support from my sister and my mum who is my best friend.

Now, I have goals. I am so much happier. I feel like my true self. I wake up every morning and feel like there is so much ahead for me.”

Read more: ‘I just want to live in peace like any other person without being worried whether I get attacked today or not’