Toilet paper by drone and coyotes at Mrs Doubtfire’s: San Francisco during Covid-19

Aisling Carroll is a writer from San Francisco who has been published in the Huffington Post, Congressional Quarterly, Business Insider, Grazia and others.

I rummaged through my earthquake/wildfire/the-president-is-going-to-kill-us-all “go bag” and shoved my hand past a can opener and emergency water pouch to fish out a mask. I checked the label and silently swore.

It was not a badly needed N95 mask but it was better than the paisley blue bandana my close friend who’s a doctor just sported on Twitter. While my cousin, an ER doctor in Dublin, dons all the right gear, my San Francisco friend is inadequately protected on the front lines.

One upside of our natural disaster-prone state is that thousands of us have go-bags, and we’re donating the masks inside to local hospitals by the droves. But these efforts are falling short of meeting the spike in demand.

As a result, there’s a growing movement to sew masks at home like something Little Women’s March sisters would do on a Sunday afternoon to aid the Union Army.

“We are all horrified,” Smita Paul recently told Reuters. She runs a small fashion business in the Bay Area and is sewing masks alongside homegrown retail giants like Gap. This, in the tech capital of the world.

The first city in the country to shelter in place

The day after St. Patrick’s Day, I tuned in to see San Francisco Mayor London Breed and other Bay Area officials break away from national leaders to issue the country’s first shelter-in-place order.

I was relieved that despite our area’s weakness for woo-woo wellness, we were siding with science.

Overnight, more than six million of us were barred from leaving our homes except to fetch groceries and medications. Although by no means excited by this development, I was relieved that despite our area’s weakness for woo-woo wellness, we were siding with science. I believed it would spare lives.

“As the president fiddles, people are dying”

I felt immense relief (and not a small amount of gratitude) to have smart, competent leaders at the helm. Despite being in the west, we were indeed not the Wild West. That was the inept White House. Or as San Francisco congresswoman and Speaker of the House Nancy Pelosi more damningly put it, “As the president fiddles, people are dying.”

Within hours of the stay-at-home directive, the bars, cafes and tony stores on Fillmore Street had plywood covering their windows. 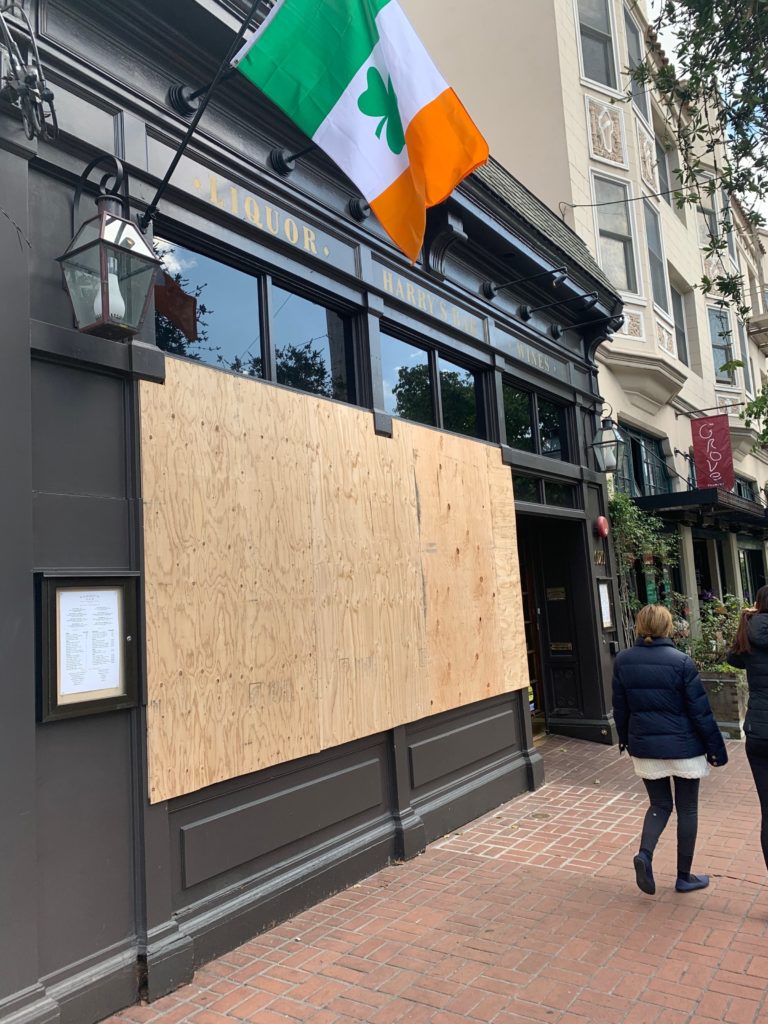 [Photo of the popular and boarded-up Harry’s bar on Fillmore Street after St Patrick’s Day, taken by the author’s sister Louise Carroll]

Soon the city announced it was leasing what are normally some of the most expensive hotel rooms in the world to house those who were homeless and had tested positive for Covid-19 or were exhibiting symptoms. Tragically, we have an unsheltered population of nearly 10,000, which grows at the same pace as our start-up community: rapidly.

There have been other out-of-context scenes.

Near the Mrs. Doubtfire house, the tourists who usually shiver in their shorts (see: the fog! Please bring warm clothes when you come!) were replaced by coyotes who skipped along the deserted sidewalks.

On Instagram, Mayor Breed showed us her favorite tools and products for doing her hair at home. (I respect a woman who I trust to protect my life and my locks.)

A man used a drone to send his buddy toilet paper across the city.

When you need that t.p. but Amazon is out, and you’re not supposed to leave your house; tech San Francisco doesn’t fail. Thank you @chenosaurus for the speedy cross city delivery- I owe you one ? pic.twitter.com/Y4OZzoyCWH

And while medical facilities scrambled to erect tents for overflow patients and top medical researchers at UCSF keep racing to find an effective treatment for those infected, some of the not exactly life-and-death desires of San Francisco’s citizenry have continued to be met.

Gourmet donut stores remain open. Smokin’ Barrel cocktails can be taken to go, in a relaxation of the liquor laws. Cannabis stores are deemed “essential services.” Barry’s Bootcamp workouts are live-streamed. Wine tastings have gone virtual. The annual Hunky Jesus competition in Dolores Park, however, has not. It’s been postponed.

But against this amusing backdrop, the livelihoods of the waitresses serving in swanky joints, the men blowing leaves off of driveways in Palo Alto and the grape pickers in the vineyards have already been eviscerated.

The average Bay Area monthly rent hovers near $3,000, and the majority of Americans have less than $1,000 in savings. The math is devastating.

These workers have started to pour out of kitchens, yards and fields and into the local food banks. Soon, many of them may be homeless, too. The average Bay Area monthly rent hovers near $3,000, and the majority of Americans have less than $1,000 in savings. The math is devastating.

Unsurprisingly, some people in the Bay have started to howl every night at 8:00 p.m. Similar to the singing and clapping happening around the world, the howls are meant to be a show of support for local health care workers. But they sound more raw than warm.

For now, I don’t join in. Although I appreciate the spirit of it, what lies ahead seems too harrowing to allow me to emit a howl.

Read more: From Singapore to Sydney: Women around the world tell us how coronavirus is impacting them

Read more: Emma in Sydney: ‘I have to say, home has never felt so far away’

Read more: Charlie in Singapore: ‘On average, I have my temperature taken 6 times a day’