Thyroid 101: What It Is And Why You Should Care

Niamh O’Donoghue called it quits on her fourth round of antibiotics. Something was out of whack and she needed to know what it was.

The first time I heard the term “thyroid” I had to take out my phone and google it. To save you the hassle, the thyroid is a butterfly-shaped gland located at the mid-point of the neck and is the largest hormone-producing gland found in the body. The thyroid affects the body’s metabolism, temperature regulation, how fast or slow you use energy and affects every single cell in the body. The thyroid itself is controlled by a gland in the brain called the pituitary. This gland secretes a hormone called thyroid stimulating hormone (TSH) which acts on the thyroid, telling it how much hormone to produce. Symptoms associated with thyroid issues are very similar to the general miserable feeling you get when you’re run-down, so making a diagnosis is particularly tricky; especially for women. 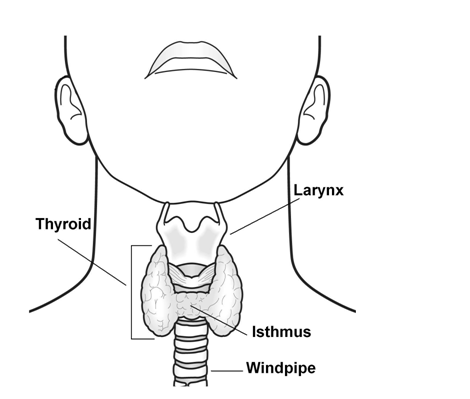 Courtesy of The Irish Cancer Society

Prior to my diagnosis, I was having a few feel-sorry-for-me moments, similar to having a long-winded cold. I wasn’t long after having corrective surgery for scoliosis and I was tackling my final year in college, but that aside, something inside me felt out of whack.

For more than four months I was extremely tired all of the time; the kind of fatigue that knocks you for six. I used to fall asleep at my desk and on public transport. My body would fluctuate uncontrollably from cold to hot, I was losing weight despite eating well and I had a constant upper-respiratory infection that wouldn’t shift; even after three courses of antibiotics (it’s worth pointing out that this infection was initially blamed as the culprit for the other symptoms). I didn’t feel me: I’m normally happy-go-lucky, but to add fuel to the fire, I felt sad and depressed more times than not. Then the lump appeared and my voice started to change.

I visited the pharmacy to collect yet another antibiotic prescription. Frustrated and running low on money from doctors bills, I asked the pharmacist for advice on what to do next. This is when she asked if I’d had my thyroid function checked to which I took out my phone and started googling…

After months of feeling restless and generally shit, a simple blood test and a chat with an endocrinologist was able to identify that my thyroid was completely out of sync: so-much-so that it wasn’t long before I was diagnosed with thyroid cancer; a slow-growing form of cancer that begins in the gland and spreads to nearby lymph nodes and organs. The lump I was feeling was a series of small tumours that were starting to press against my vocal chords causing my voice to deepen and crackle.

My test results were on the more extreme end of the spectrum but, generally, there are four main types of thyroid issues to be aware of according to womenshealthclinic.ie:

Hypo and hyperthyroidism are generally treated with tablet-form hormone replacement therapy, HRT, to increase, reduce, or in some cases replace, the number of hormones being produced in the gland. Once prescribed HRT it can mean taking it for life, but it is possible to wean off (make sure you consult with your endocrinologist first). Unfortunately, invasive surgery and radioactive iodine therapy are the preferred options for treating cancer in the thyroid as traditional methods of chemo don’t kill the type of cells located in the gland.

Thyroid issues are very common and an estimated 20 million women and men have some type of thyroid disorder, and one in eight women will develop one in her lifetime, according to the American Thyroid Association. It’s totally possible to live a normal life after a thyroid diagnosis, but some life changes will need to be made (such as diet and exercise) in order to restore the balance. After that, it’s up to you and how you listen to your body and treat it. That being said, at 24 I never imagined relying on HRT and the challenges that it brings. What it has done, though, is teach me to listen and be in control of my body and to take action when signals strike.

When should you see your doctor? If you’re suffering from on-going fatigue, weight gain, depression, being sensitive to the cold, dry skin and hair, muscle aches and feeling generally unwell.

Media mogul Oprah Winfrey has been battling with her thyroid since 2007. She thought she’d hit on a foolproof formula for permanent weight loss. Then life—in the form of a thyroid problem and a killer schedule—intervened. Former first lady, Senator, Secretary of State, and 2016 Democratic presidential candidate Hillary Clinton announced in her medical records in July of 2015 that she was being treated for hypothyroidism.

Most recently, young model Gigi Hadid recently opened up about her battle with Hashimoto’s disease – also known as chronic lymphocytic thyroiditis – which causes her weight to fluctuate. She brilliantly and perfectly shut everyone questioning her weight down on Twitter.

For those of you so determined to come up w why my body has changed over the years, you may not know that when I started @ 17 I was not yet diagnosed w/Hashimoto’s disease; those of u who called me “too big for the industry” were seeing inflammation & water retention due to that.

Thyroid issues can strike at any age, and affect any gender and race, so next time you have a check in with the doc, add it to the list and get checked.