Growing up in Dundalk, May Ciaran and her Irish-Nigerian family were the only non-white family in the area. Here she talks to Lizzie Gore-Grimes about the bullying she experienced and the strength she later found to realise she was not the problem – systemic, ‘denied’ racism was.

“The past few weeks have dredged up so many difficult memories for me. Incidents and experiences I had obviously suppressed,” admits 33-year-old May Ciaran, born to a Nigerian father and Irish mother, and raised in Dundalk. “When George Floyd was murdered in America, I was absolutely heart-broken and then when the protesting and rioting broke out, I was nervous. I was afraid I would lose friends over the difficult conversations that had to follow. But, in fact it was almost the opposite. My close friends have been so supportive and outraged by what is happening in America.”

Quick to jump on the bandwagon

That said, May cancelled her Facebook account a few days ago because of the slew of racist commentary she saw posted on certain people’s accounts. “They were friends of friends, I don’t even know them directly. I saw they were quick to jump on the bandwagon to post messages in support of #BlackLivesMatter movement but then proceeded to be critical of the demonstrations while still claiming they were in no way, shape or form a racist, and then sat back when others made disgusting and hateful comments underneath these same posts. I found this so hypocritical and I couldn’t look at it.”

May’s father, a Nigerian military officer, met her mother in early 1970 when she travelled over to Nigeria as a nurse, with the Irish red cross. May’s mum was due to be in Africa for six months but ended up staying for 16 years. “They travelled around a lot as my father was in the military but my mum always went home to Dundalk to give birth in order to have the help and support of her own mother,” explains May, referring to the birth of her four older brothers and herself.

Growing up in the late eighties and early nineties, we were the only non-white family in Dundalk. We experienced racism, of course we did; racism is everywhere.

Just before May was born in 1987, her parents had already made the decision to relocate to Ireland, following the military coup and unrest in Nigeria. Tragically May’s father died suddenly just a month before she was born, so he did not get to join the rest of the family in their new home in Dundalk.

I thought I was the problem

“Growing up in the late eighties and early nineties, we were the only non-white family in Dundalk. We experienced racism, of course we did; racism is everywhere. I guess the really sad thing is, which I see now with hindsight, that as a child I thought I was the problem.”

It’s heart-breaking to listen to May talk about what it felt like to be an eight year old child, trying to figure out why people made fun of her and left her out. “The difficulty with it was that it was not obvious – I can see now how subtle and insidious it was. It was more about exclusion than aggression – they just made me feel like I didn’t exist.” 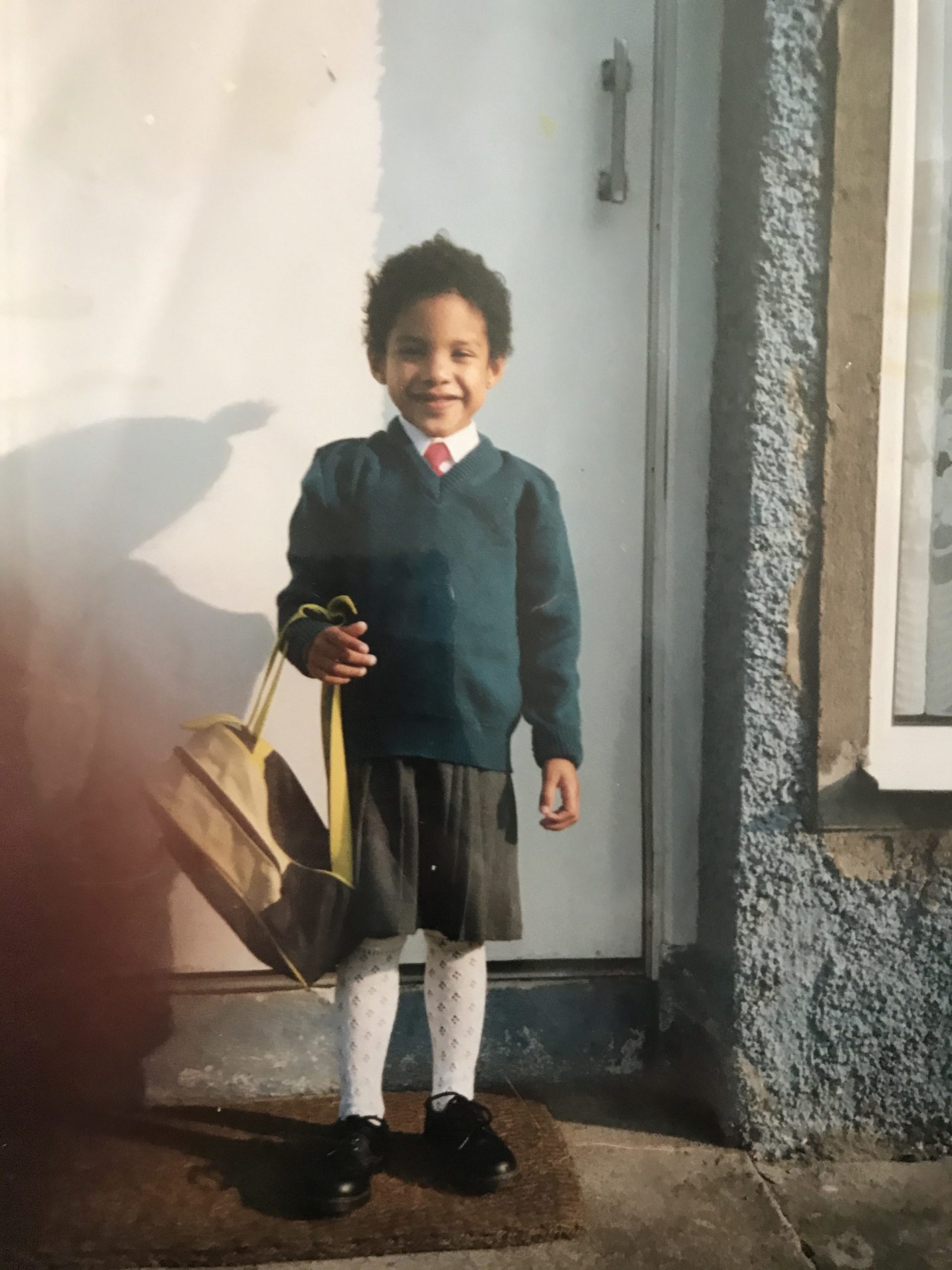 As a child May wasn’t aware of issues around race, she just assumed, as you would, that there was something wrong with her. The damage that this can do to a child’s developing psyche and self of self is devastating. In the end the bullying in primary school became intolerable and May had to change school.

“My mum was amazing throughout it all. She listened to me and supported me all the way. Her philosophy was always one of reconciliation. She never sought separation, she always encouraged us to confront the problem and try to solve it with compassion. I know she felt at the time, that my peers were just children and didn’t understand their actions. She was always so full of empathy and understanding rather than anger but in the end the only solution was to move school.”

It enabled me to build my confidence back up, gain perspective and realise that the problem was not mine – it was theirs

Thankfully for May her final primary year in her new school was completely different. “It was a really positive experience and enabled me build my confidence back up, gain perspective and realise that the problem was not mine – it was theirs.”

I remember when I was only about ten or 11 years old, I was walking down the road and a grown man screwed up his face when he saw me, and actually spat at me

May goes on to say that the girls who bullied her as children, she later became friends with as young adults. “They were extremely remorseful and they are lovely people.” But it was not just primary school aged children that treated May and her family with disrespect.

Denial, the greatest insult of all

“I remember when I was only about ten or 11 years old, I was walking down the road to the shops in Dundalk and a grown man screwed up his face when he saw me, and actually spat at me.” But his naked act of hatred and racism was not ultimately what upset May the most, it was the denial of it by the (white) people around her. “When I told people, they would say things like, ‘Oh no, don’t be silly, he was probably just spitting on the ground, it wasn’t targeted at you.’

“They didn’t want to hear about it and they didn’t want to acknowledge that such racism was alive and festering in our nice town. When you’re young and impressionable and enough people keep telling you that these actions are not as malevolent as you think they are, you begin to question yourself. Maybe I did imagine it? Maybe my instinct is wrong and the person ‘didn’t mean it’.

“Sure, you’re not black-black…”

“It took me years to realise how damaging this kind of denial is. Later, in secondary school, there would be occasions where someone in the group would make a flippant racist remark and if I expressed upset, I was again, in a different way told, not to be silly, they weren’t talking about me…”

“Sure, you’re not black-black … why are you getting offended?” Is actually a remark that people made to May time and again while she was growing up.

I was cruel to people who didn’t deserve it. I suppose I was trying to make others feel the way I had been made to feel

It is understandable that as a result of years of being on the receiving end of incessant aggressions, some subtly insidious but plenty outrageously overt, May developed her own challenging behaviour as a teenager.

“I cringe when I think back on it, I was about 15, and I guess I was trying to be a tough girl. It was a defence mechanism. But I know there were times I was cruel to people who didn’t deserve it. I suppose I was trying to make others feel the way I had been made to feel. I was hurting but it was unkind and my mother saw it happening and put an end to it.”

It was also during these teenage years that May first started getting her hair braided. During her early childhood years in Dundalk there were no African hair salons or tools and products available to look after her hair properly so she started to chemically straighten it from the age of eight.

The business of beautiful hair

“I realised quite recently that I hadn’t actually seen my own natural hair in years and I wanted to change that.” May explains how she enjoyed experimenting with braids and corn-rows as soon as the Afro-Caribbean hair salons started opening up in Ireland in the late nineties and then moved on to weaves in her twenties but now wants to enjoy her hair in its most natural, beautiful form.

This realisation inspired May to launch her new business – The Ionic Pillowcase –the first pillowcases to market to combine silver ion technology with luxury Mulberry silk. “These pillowcases are particularly beneficial for African hair. The silk fabric prevents the hair from knotting and getting dehydrated, while the silver ion destroys bacteria – improving the health of both hair and skin while you sleep.”

All my life people have reached out to touch my hair uninvited. It’s so invasive

Sadly the innovative pillowcase is unlikely to prevent white people from touching her hair. “All my life people have reached out to touch my hair uninvited. It was bad enough when I was a child, but a few months ago I was in a nightclub with friends and someone ran by and ruffled my hair as if I was a bush!” May exclaims with a laugh but you can hear the barely disguised distress. “It’s so invasive.”

Right now, as May is cocooning at home in Dundalk with her mum who has underlying health issues, she is grateful to be able to work from home and is excited to be launching her new business.

Proud to be Irish

To anyone out there who thinks that they’re grand, they don’t need to do anything because they’re not racist, I want to ask them to think again

“I am glad to call Ireland home,” she states firmly. “I am proud to be Irish. In my own experience, I have found the majority of the people here to be open and supportive but unfortunately, it only takes a few to poison things. To anyone out there who thinks that they’re grand, they don’t need to do anything because they’re not racist, I want to ask them to think again.

“It’s not just about being passively not-a-racist, it’s about being actively anti-racist. Are you asking yourself the difficult questions? Are you examining your bias? What are you doing to be anti-racist?”

I have to admit my own privilege. Because of my mixed race heritage I have a lighter skin tone than others. I want to acknowledge that and be truthful to myself

“When I see my young nieces and nephews growing up here in Ireland and blossoming in more racially diverse primary schools I am happy for them. Ireland has come a long way, but we have so much more work to do. We need to keep talking, keep listening and keep learning.”

The Ionic Pillowcase will be available at the end of June.  For updates follow @ionic_pillowcase on Instagram.