The annual British Fashion Awards took place last night and the 2018 ceremony had its glitziest attendee list yet with a host of designers, celebrities, models, fashion innovators and activists attending the ceremony in the Royal Albert Hall in London. The awards celebrate global industry leaders in fashion, technology and innovation.

Not your average Monday night affair, guests took to the red carpet, offering a small bit of fashion escapism. Rosie Huntington-Whiteley looked lavish in a low-cut, feathered Givenchy gown, while Kendal Jenner chose an eye-catching, completely sheer gold dress by London Fashion Week designer Julien Macdonald. Model Kaia Gerber (who won Model of the Year) opted for a dress-and-trousers combination featuring dramatic cut-outs to reveal trousers beneath. Saoirse Ronan, wearing a stunning multi-coloured, heavily embellished Gucci dress, presented an award to Marco Bizzarri, CEO at Gucci, for his leadership at the helm of one of the world’s most influential brands. Activist (and recent guest on IMAGE.ie’s podcast Smart Casual) Sinead Burke wore a custom, sustainable, Mother Of Pearl gown. The black, full-length, jacquard gown was woven from organic cotton sourced from Egypt and mulesing-free wool from Uruguay; traced from field to final to ensure it is fully organic, socially responsible, and has created the minimum impact on the planet.

Gallery: The best of the red carpet arrivals from the British Fashion Awards 2018 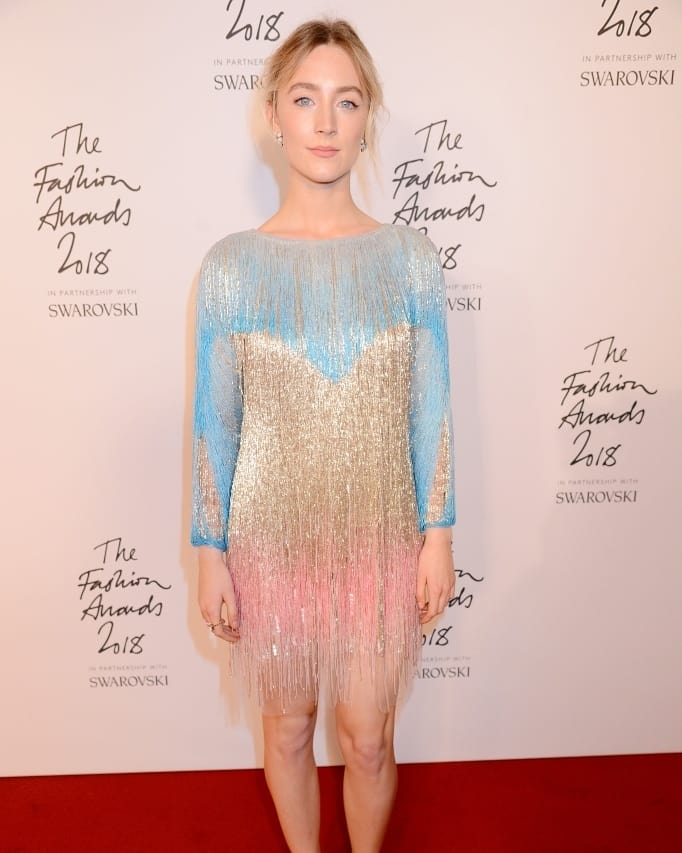 The #FashionAwards is an extraordinary evening and so surreal to be there this year as part of the #BFCNewWave – the one hundred young creatives who are shaping the next era of the fashion industry. I had the great privilege to sit at the @google table (thank you, @nishinosh and Ronan) and cause chaos alongside CEOs, fashion designers and even, @leighannepinnock and @jadethirlwall. . . My dress is custom and sustainable from @motherofpearl – it is an extraordinary black full-length jacquard woven from organic cotton sourced from Egypt and mulesing-free wool from Uruguay. It has been traced from field to final to ensure it is fully organic, socially responsible, and has created the minimum impact on the planet. Thank you Amy, Nick, Chloe, Faye and Daniel. The bag is of course, @judithleiberny and came all the way from New York for such a special evening. Thank you, Karen. . . Special thank you to @cashmandjmc who trekked hours to perform a much-needed blow-dry. . . [Image description: Standing on the red carpet at the #FashionAwards, beaming the most outrageous smile – the kind that stretch across your entire face. I can’t help but think – what a year.]

Miuccia Prada and Kim Jones were among the big winners of the night for their outstanding achievements and contribution to the fashion industry. They were recognised alongside the “next generation of design pioneers” like Samuel Ross and Virgil Abloh. Central Saint Martens prodigy Richard Quinn was crowned as the Emerging Talent winner for his efforts in womenswear.

Kaia Gerber, who made her catwalk modelling debut just this year, was crowned Model of the Year, making her the youngest model to ever be honoured with the accolade. Scroll below to see the full list of winners from the night.

Meghan Markle was a surprise guest on the night; the Duchess of Sussex, expecting her first child with husband Prince Harry in the spring, appeared on stage in a bespoke black Givenchy to celebrate Clare Waight Keller, the creative director of Givenchy who designed her wedding dress. She adorably cradled her growing baby bump throughout.

Accessories Designer of the Year

Brand of the Year

British Designer of the Year Menswear

British Designer of the Year Womenswear

Designer of the Year

Model of the Year

Parley for the Oceans