Resin artist and jewellery designer Ciara O’Neill talks to us ahead of Galway’s Irish Design Works exhibition from July 15.

Established by a network of Irish makers and creatives, Design Island comes together to promote Irish design around the country. They’re back this year with their fifth installation of Irish Design Works at Galway city’s Tribeton from Monday, July 15.

Showcasing the work of 15 craftspeople from around the country, the exhibition will include the likes of furniture makers Tricia Harris, Daniel Gill and Gabriel Furniture, ceramicists Ann McBride and Tatianna Dobo, and Image Interiors & Living Design Award winner Alan Meredith.

Ahead of the showcase, we catch up with resin artist and jewellery designer Ciara O’Neill to uncover the inspiration behind her brightly coloured resin pieces.

Born in Galway, Ciara moved with her family to Boston in the US when she was 12. She admits that the transition was hard as a young teenager. “I was very homesick, it’s different being a teenager in America then being a teenager in Ireland.” She returned back to Ireland for university, eventually completing a degree in interior design in Wolverhampton. After that, she headed to Oz, where she spent the next eight years perfecting her resin skills before returning home.

In Australia, she rediscovered resin after working with it during her final year project. She had created a large wall-mounted LED installation piece that resembled raindrops, but it was in Australia that her work with resin really took hold. “Resin is quite popular as a material over there, they use it for surfboards and things,” she explains. “So I began retraining myself in how to work with it and it progressed from there.” 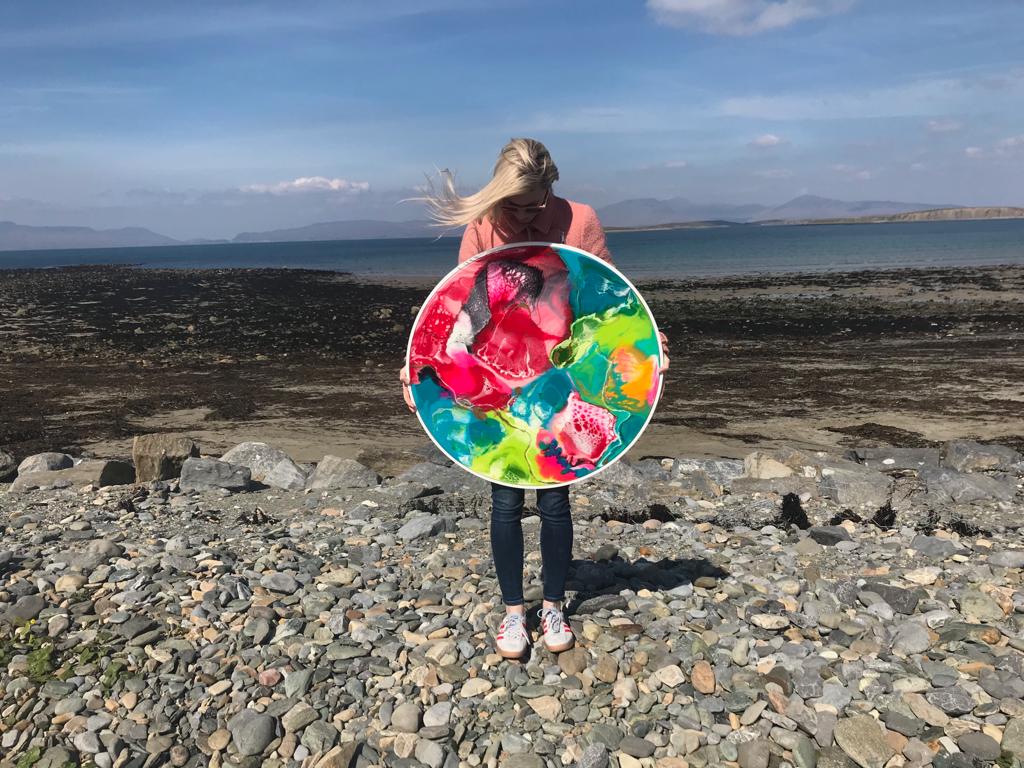 If you look at any of Ciara’s work, you’ll find the common thread is always colour. Bright swaths of pinks, yellows and greens swirl through each piece, like light bulbs calling out through darker hues. “I’ve always been a bright, impulsive person,” she says, but it was really her move to the sunny climes of Australia that brought it into her work. “When I came back and was working with these colours, people were kind of like, ‘Oh, it’s so different,’ where in Australia it was normal, I think the sunshine and colourful landscape is natural over there.”

…but she’s not a fan of brown

She was initially worried that her work would be “a bit bright” for Ireland. When I suggested that Irish people tend to be a bit colour cautious, she agrees but explains colours like mossy green and brown are just not her personality. “Brown is a colour I have never liked, I just can’t work with it,” she laughs. “I’ve seen it in other people’s work and I appreciate it but it’s just not for me.”

Thankfully, reception of her work, which she says is inspired by the colours themselves and the feathers of tropical birds, since she came home three years ago has been wonderful. Stocked in Galway city shop Two Geese and in Forest and Flock in Bantry, Co Cork Ciara has also been busy with private commissions. “Yeah, it has been brilliant,” she smiles.

Sanding up a storm ?

Pouring resin is a science

“I have a cat,” she tells me with a hint of foreboding in her voice. “And he is not allowed in the studio because his fur is guaranteed to find its way onto the painting and land in it.” That’s because, even after Ciara has mixed her dyes into the resin and poured it, the resin will continue to move for up to 24 hours afterwards. “The studio has to be super clean and the surface you’re pouring onto needs to be perfectly flat, otherwise the resin will just slide off,” she explains.

Even then, with the atmosphere just right, the resin can sometimes just decide to do its own thing. “I probably have 80% of an idea of how it’s going to look when I start,” says Ciara. “Sometimes the resin doesn’t react the way I want it to react and it ends up a happy surprise.” It’s also almost impossible to replicate a piece because of the resin’s organic movement. “Even if I use the exact same measurements and dyes, pour it the same way and use the blowtorch the same way, it won’t be the same. Because it depends on the heat of the day and so many things you can’t control,” she says. “It’s quite freeing to work that way.”

Related: Urban Outfitters is the interiors shop you’ve been sleeping on

She began designing jewellery just for herself

Ciara’s interest in jewellery more or less began as a project for herself. “I just couldn’t find the kind of quirky jewellery that I wanted, so I started researching how to make it myself.” But friends and clients began commenting on them and she decided to create a little side to her business.

She’s setting up a studio

If you won’t get the opportunity to see Ciara’s work at the Irish Design Works or in any of her suppliers, soon enough you’ll be able to make an appointment to meet Ciara in her studio in Co Galway. “To be honest, people are already coming in to see my work but I’m not properly set up yet.”

You can see Ciara and her work, along with many other Irish creatives and designers, At Galway’s Irish Design Works showcase in Tribeton from July 15 to 28.

More like this: Take a look inside the July/August issue of Image Interiors & Living

More like this: This Galway canal house gets a bright and modern renovation

More like this: Meet the judges of the Image Interiors & Living Design Awards