Personality types are funny things. Whether we want to submit to them or not, we’re decidedly hard-wired to behave and perform in a certain way. That’s why I was never more freaked out recently, than when I was asked to take part in a photo shoot for TK Maxx to promote their ?ridiculous possibilities? campaign.

In truth, I wouldn’t have done it, except that the campaign revolves not so much about the humans they cast, but our doggy companions and all that we do together. We are the CEILI – those who opt for a?Canine Enabled Integrated Lifestyle. So, the idea of a portrait, shot by leading photographer Barry McCall, of Flumpy and I, was an offer I couldn’t refuse (even if the process was going to make me feel decidedly odd). That, plus the fact that Flumpy had decided to donate his ?fee? to Miniature Schnauzer Rescue Ireland, to help his less-fortunate relations. well, I – we – were in.

It seems odd that in the 30 years I’ve worked in media, a large portion of which is spent with photographers, stylists, hair and make-up artists, hanging around locations, holding reflectors and bossing (sorry, there is no other word for it), the day along in order to get the quantity and quality of shots required, I’ve rarely stood in front of the camera. I’ve cajoled others to do so, encouraging them, praising, getting involved in outfit choices and admiring hair and make-up looks. I’m the ace cheerleader on a shoot; the loud, gregarious one who’s turning up the music, calling in the coffees and getting the party started. But turn the lens on me and I quiver. It’s not what people really expect, but only recently a psychiatrist referred to me as ?an introvert in an extrovert world?, and I think it’s an accurate call.

I mean, I was the one who cancelled all recent ‘significant? birthday celebrations, not because I didn’t want the world to know I was turning 50, but because I couldn’t stand the attention. Instead of a party, that day I had breakfast with my family, lunch with my work pals and dinner in front of the Late Late with Flumps. Perfect. Any time I have to stand in the limelight, I deflect it. Back in the day, my engagement party doubled as my father-in-law’s birthday celebrations, and my wedding was timed to correspond with my father’s birthday weekend. Show me a red carpet and I’ll find my way around it, rather than parade through a bunch of photographers. 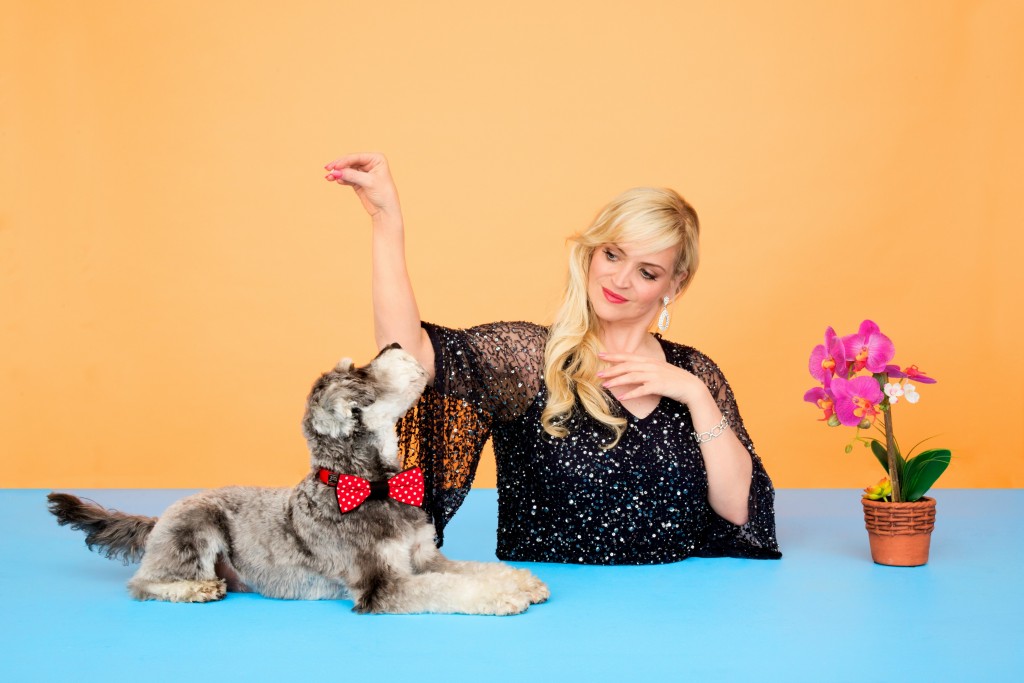 Anyhow, I gave the shoot a go, and of course it was grand. Better than grand. It was so enjoyable to just sit back, drink coffee (instead of run for it) and let someone else conduct the orchestra. All I had to do was have three of my favourite creatives work on me – make-up artist Christine Lucignano, who actually ‘did? me for my wedding and is not only brilliant at her job, but the funniest, most capable, most calming wing-woman a nervous girl could ask for. Hair stylist David Cashman, performed miracles and also took care of the tunes; stylist Courtney Smith, was better than a ?hear, see, say no evil? monkey as she turns a blind eye to imperfect bodies (let’s face it, she’s used to super models) whilst finding the perfect outfit (which of course I ended up buying, TK Maxx, bargain!) that’ll work on mortal and camera. Flumpy and I relaxed in to the day.

In fact, Flumpy had no bother at all with anything, he’s the opposite of me and wanted to get stuck in with everything and everyone; including wearing a GoPro camera on his back, to help the video team capture the day. By the time we got in front of Barry, we were having a ball, and to see him, and his team, work from this perspective was an honour.

So, what’s the campaign about? It articulates just how shopping in TK Maxx is? you head in for sunglasses and get sidelined into dog bowls; go for headphones and come across that fave, discontinued nail varnish shade. We all love a TK Maxx haul and the ridiculous possibilities that come from walking through those red doors.

And what did I learn? Well, sometimes it’s nice to let one’s inhibitions down, go against the grain and be Queen for a day – you don’t actually have to do much, except smile and let it all happen.

#Brexit: London Irish ? A Week On, How Are Our Emigrants Feeling?