#Brexit: London Irish ? A Week On, How Are Our Emigrants Feeling?

There’s no place like home. But where is home? Is it where you were naturalised or nurtured? For many Irish emigrants, their formative years have been spent cutting their teeth in the fiercely competitive British capital – a city of such impressive and historic multiculturalism that its population [Greater London] now exceeds eight million and speaks in more than 250 different tongues. For some, this diversity is deeply disturbing. For others, it is to be celebrated.

For the latter, ?No Blacks, No Dogs, No Irish? rhetoric is stuff of legend; of past, darker, less tolerant times. And yet this day last week the not-so-United Kingdom became explosively split down the middle: old vs young, left vs right, working class vs middle class, north vs south, The Natives vs The World. All the while a clusterbomb; the pound crashed (then stabilised), hate crimes increased and party politics descended to new levels of farce. The powers that be – patently unprepared for a Leave victory – made the government a toe-curling laughing stock at European Parliament. Had the stay campaign not rested on its laurels and the leave victors used their time to prepare a viable, practical exit strategy instead of creating a manifesto of lies then, one week on, there might have been a feeling of the dust settling. In reality, it is raining harder than ever and with little sense of respite.

?I feel like I’ve been dumped by a long-term girlfriend with whom I thought I was building a future,? says Kilkenny-born Dalston-based photographer Steve Ryan. ?I’ve been living here for six years and have told many friends at home and abroad about how much I’ve learned about diversity and culture from living here. I thought Ireland and the UK were walking hand and hand into a progressive future and I was a part of that. FAIL. I don’t want to live here anymore.?

The anger is palpable, too, for designer Helen Delany, one-half of hip knitwear brand Electronic Sheep and a London resident for 20 years. ?This may sound a bit extreme but I feel insulted that the country I live in doesn’t?want to be part of the bigger picture and share with us Europeans.?London is an amazing place and it has been very good to me. I’ve had only doors opened?to me in the design industry. The level of professionalism has been outstanding and I feel very lucky to be part of that. I didn’t have?to adapt, to ?become English?, as I lived in an open-minded community with modern thinking. Or so I?thought…?

London though does not represent the rest of the country. Across its 33 boroughs nearly 60 per cent voted Remain, leaving the majority of its residents in shock. Among them non-nationals whose freedom of movement is now in jeopardy as the EU Parliament (currently) stands firm on blocking single market privileges. ?After Friday’s results all I could feel was grief,? admits makeup artist and Dubliner Ruth Brophy, who moved to London 13 years ago. ?Regardless of the capital’s vote to remain, I am now living as an Irish EU citizen in a non-EU country. I newly and keenly felt my immigrant status as I went through a day’s shooting for a magazine with a team made up of seven different EU nationalities – and at least four moments of tears.?

This is not the first time that ?London Irish? expats have felt diminished, of course. Says Delany: ?My first job as a designer was in West?London, where I live now. It was the early 1990s so I got a bit of flack?for being Irish as the Troubles were still happening. I would avoid the subject as much as possible. Then’things got better as the Peace?Treaty came along. I remember the day someone said it was ?cool to be Irish? – apparently Colin?Farrell had changed?people’s minds! And, in truth, personally, I did get a better time of it for being Irish. Now I have my own family in London, friends, a studio,?a mortgage, but am now beginning to feel like I did in my early twenties again – a bit of an outsider.?

?Everyone I spoke to,? agrees Brophy, ‘regardless of the way they voted had never even considered Ireland. Our peace process, our borders, and the affect Brexit could have on Britain’s closest neighbour. This only deepened my feeling of ?other? in a city that I had always felt welcome in and part of the rich fabric. London is an amazing city – it has its challenges, it can be exhausting, competitive and cruel at times. But it has always felt worth the fight. This week I’m not as sure.?

With a sparring government and a subsequent lack of leadership, it is still too soon to know how Brexit will affect the Irish diaspora in a newly non-EU country. For Electronic Sheep, which has offices in Dublin and London, the future is a series of question marks. ?Our yarn is Italian, our production is in Greece, our agents and PR are in London and so on. We are all intertwined here in Europe and that is a good thing. It makes sense. We are smaller countries sticking together. I know the EU is not?perfect but on a basic level, it makes life easier for?us. As Noel Gallagher?put it, for me, ?Brexit??belongs?on a cereal box.?

For other young Irish expats, a picture speaks a thousand words. Camden-based illustrator Conor Ryan, who has been in London for nearly nine years, here offers his own personal response to Brexit: 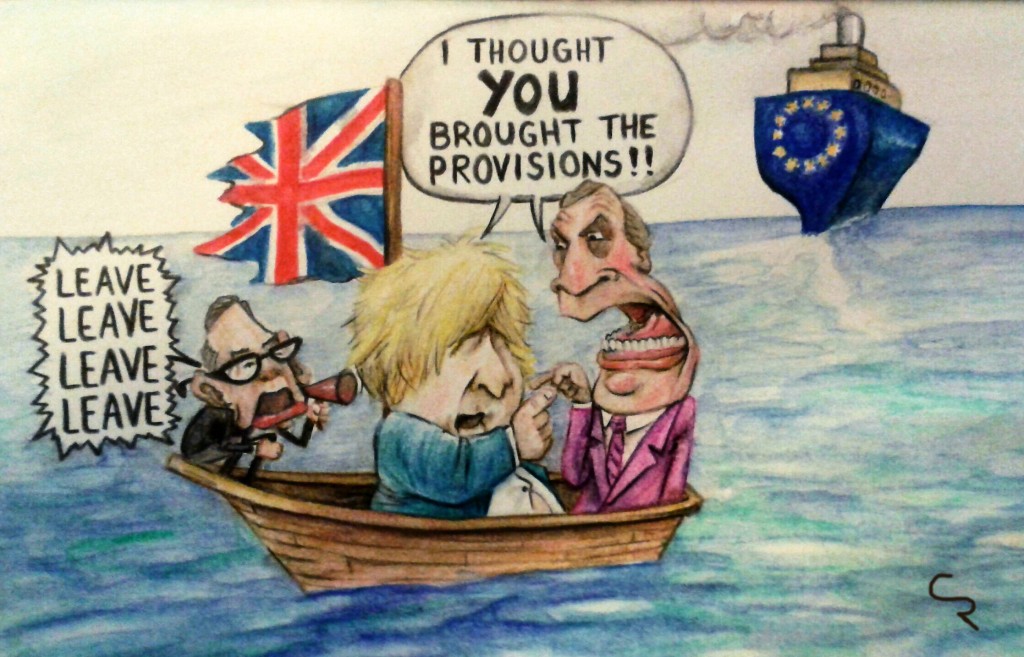