Naturalist David Attenborough took to the Glastonbury Pyramid Stage to praise festival-goers for going plastic-free, as well as debuting his new docu-series ‘Seven Worlds, One Planet’

The 93-year-old naturalist wanted to thank festival organisers for implementing its first ever plastic ban, as well as revellers for adhering to the ban.

For the first time since it launched in 1970, Glastonbury music festival went plastic-free. “In a concerted effort to make Glastonbury more sustainable and to help festival-goers consider their use of single-use plastics, plastic drinks bottles will not be available at Glastonbury Festival 2019,” organisers said.

Related: Eight ways to break up with plastic in 2019

“Instead we recommend festival-goers use a reusable water bottle. Water bottles can be refilled for free at every water tap and at the many WaterAid kiosks throughout the festival site. We have a mains water supply from Bristol Water that is the same quality as your domestic supply at home. Refilling a reusable water bottle makes a huge difference to the volume of plastic bottle waste,” organisers added.

What’s more, on-site bars offered revellers the opportunity to drink from reusable, stainless-steel pint glasses; rather than disposable plastic ones. 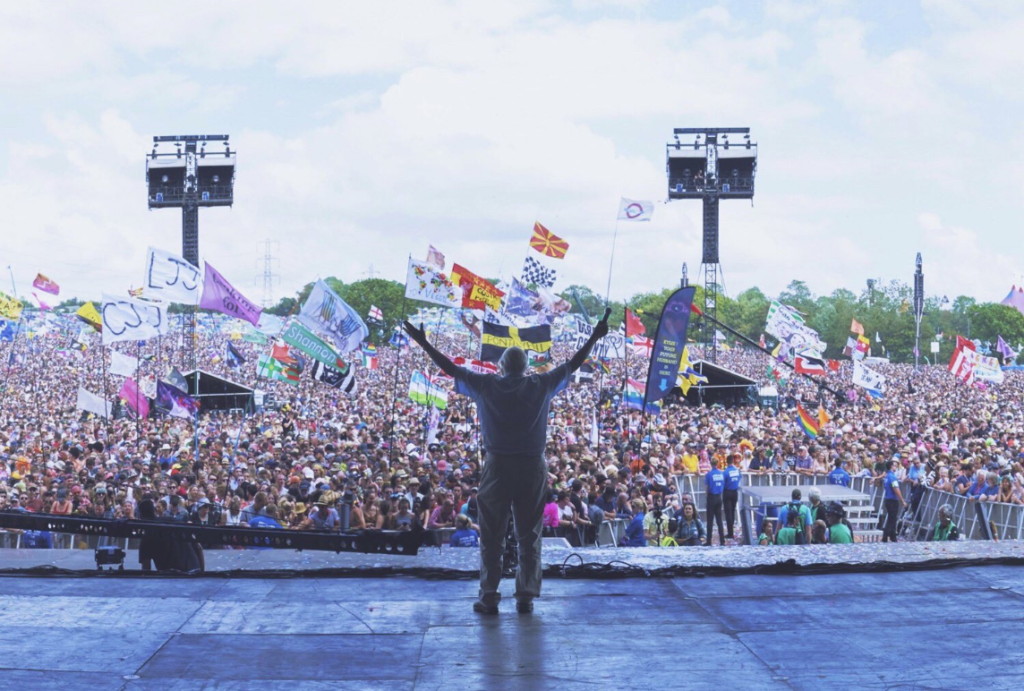 David Attenborough at Glastonbury, photo via No Plastic Project on Twitter

“Thank you, thank you”

David Attenborough, who has spent his career campaigning for the environment, took to the festival’s Pyramid Stage to praise everyone for their efforts. He also took the opportunity to debut never-before-seen footage of his new BBC docu-series, Seven Worlds, One Planet.

Walking on stage to the sound of cheers, as well as an audio track of whale sounds, Attenborough seemed moved by the volume of people before him. So loud were the cheers that he re-started his speech twice.

“This great festival has gone plastic-free. That is more than a million bottles of water that have not been drunk by you at Glastonbury…”

“Those extraordinary, marvellous sounds you’ve just been listening to were the sounds of the creatures that live in the sea and the great oceans,” he said. “You may have heard some of them in a series that went out two years ago called Blue Planet 2.

“There was one sequence in Blue Planet 2 which everyone seems to remember. It was one in which we showed what plastic has done to the creatures that live in the ocean.

“They have an extraordinary effect. And now, this great festival has gone plastic-free. That is more than a million bottles of water that have not been drunk by you at Glastonbury. Thank you. Thank you,” he said.

The biggest cheer of the afternoon at #Glastonbury2019 went to Sir David Attenborough ??

He introduced #SevenWorldsOnePlanet a new BBC Earth series on the Pyramid Stage. ?pic.twitter.com/X6v0tiUSJH

David Attenborough went on to say, “The oceans cover two-thirds of this planet of ours. Land only covers one-third of the globe.

“We have been making, for the last four years, a series about those things, about those seven very different continents. It starts later this year. It’s called Seven Worlds, One Planet. Here are a few glimpses of what awaits you in the next few months.”

Watch the trailer, as shown at Glastonbury, in full below.

Read more: 10 easy switches you can make to live a more sustainable life

Read more: How to talk to your children about climate change

This cosy cottage along the Wild Atlantic Way is on the market for €165,000

David Attenborough’s impassioned speech at COP26 is a must-watch