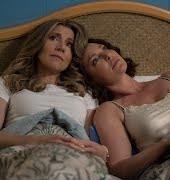 What the critics of Normal People’s sex scenes get wrong

Normal People tracks the tender but complicated relationship of Marianne and Connell from the end of their school days in small-town west of Ireland to their undergraduate years at Trinity College. At school, heÕs well-liked and popular, while sheÕs lonely, proud and intimidating. But when Connell comes to pick up his mother from her cleaning job at MarianneÕs house, a strange and indelible connection grows between the two teenagers Ð one they are determined to conceal. A year later, theyÕre both studying in Dublin and Marianne has found her feet in a new social world but Connell hangs at the side lines, shy and uncertain. Marianne (Daisy Edgar-Jones) and Connell (Paul Mescal), shown. (Photo: Enda Bowe/Hulu)

There have been a number of criticisms of Normal People‘s sex scenes since the show aired last week, but here’s why we need to lean into this realistic, sex-positive portrayal of intimacy

By now you’ve probably read a rave review of the TV adaption of Sally Rooney’s novel Normal People, or you’ve heard people complaining on the radio about the sex scenes it includes. More than likely, both have crossed your path.

The 12-part series has become an instant hit since its release in late April. Critics have been praising the portrayal of first love and heartbreak, particularly the chemistry between the two leads, Kildare’s Paul Mescal who plays Connell and Daisy Edgar-Jones in the role of Marianne.

Aside from the futility of debating the morality of teenage sex (they’re having it whether you think it’s acceptable or not), there is so much missing from this analysis. What makes these sex scenes such a visceral experience is their realism. It’s an honest and unedited portrayal of young love that frankly we rarely get to see on television – a depiction of first-time sex that isn’t a gag reel or an embarrassing story told at a dinner party 15 years later. It’s a sex-positive homage to the seriousness, gravitas and weight of that moment. This should be exactly what we want to instil in young people about sex.

This sense of realness is heightened by something else we rarely see on television – sex told from the perspective of both partners. So much of on-screen sex is shown from the perspective of the man, focusing predominantly on her body and his pleasure. Normal People not only captures both of their bodies equally but also their faces and, most interestingly, their conversations through the heightened tensions and lulls of sex.

Sex is typically not a silent, well-paced act performed by candlelight, as many big-screen portrayals would have you think. The first sex scene here is really a dialogue scene, as Marianne and Connell weave their way towards one another, verbally and psychologically, as well as physically.

Within this dialogue too is a beautiful depiction of consent. Connell pauses to tell Marianne that they can stop whenever she wants, and even when she insists she won’t want that, he repeats that they can stop if she changes her mind. They are considerate partners to one another, responding to one another throughout, both with body language and with words.

The sex scenes, of which there are quite a few throughout the series, also form a key touchstone in the plot. In Rooney’s novel, we get so much of their interior world, their thoughts and feelings towards one another, which is almost impossible to adapt onscreen without a narrator. Sex is used in the TV series as a way of demonstrating Marianne and Connell’s true feelings to the audience, hidden from one another beneath layers of self-consciousness, anxiety, and a fear of being rejected. It acts as a catalyst for their relationship, as they leap together or begin to crumble.

So much of their relationship is about miscommunication, things left unsaid or misunderstood, but the audience can’t be privy to those emotional inaccuracies unless we know what their true feelings are. This can’t be done with words alone, otherwise it wouldn’t be believable that they could not understand one another. It needs to be done subtly, quietly, with a sleight of hand – which is where these scenes play a pivotal role.

The respect with which young love and sex is paid in this TV adaption is what has made it such a hit. Much like the book, the empathetic nature of these scenes is so sincere that it can make them uncomfortable to watch at times.

But just because our understanding of sex has been poured through a glamourised lens courtesy of films and pornography, doesn’t mean we should turn away awkwardly from a truthful representation of good sex. If anything, isn’t that a reason we should lean into a more realistic but no less consequential portrayal of sex? A mutually shared experience between two people who love and respect each other – what more could you want to teach a young person about sex and intimacy?

Read more: There’s a reason we’re all so thirsty for Connell in Normal People

Read more: Everything we know about Sally Rooney’s ‘Conversations With Friends’ TV adaptation