A soggy, flooded home is no one’s ideal. Eoin Higgins tries to see the dry side of his flooded apartment.

It all started when I couldn’t open the front door. When I looked through the keyhole, something about the door didn’t seem right. I called the apartment maintenance guy, and he arrived soon after.

After a few attempts at shouldering his way through, he dropped down on his back, wedged himself against the opposite wall, and kicked the door with both feet until it broke open to reveal the watery Serengeti of my once habitable home.

Flotsam and jetsam lay in puddles. I stepped over a framed family photograph, bloated and discoloured by the deluge, and caught sight of what had once been my record collection – built up over years, decades – warped, damaged and literally strewn all over the gaff. A dreamlike numbness came over me as the maintenance man stood in the doorway, sucking air between his teeth. He began to explain how the ballcock failed in the main water tank of the building. Meanwhile, all I could think of was a vinyl solution …

Since the disaster was no fault of my own, I imagined that this would be a cut and dry (yeah, really) case of handsome personal compensation for everything lost, and then some. I envisioned a situation where a parade of doleful young men in polyester suits clutching chubby envelopes of cash would soon be at my misshapen door apologising, begging me to take their money, offering me puppies, and chocolate, and chocolate puppies stuffed with money, in order to restore my loss. Alas, that dream turned out to be more than a little far-fetched. 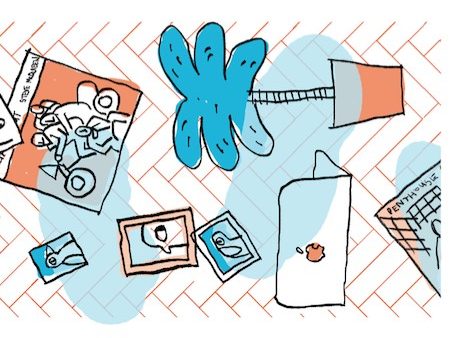 It wasn’t my favourite six-month stretch of all time, it has to be said. The mould that had begun to grow under the warped floorboards forced me to move out until the dilly-dallying and the work was done. Meanwhile, Project Record Cleaning turned out to be a depressingly foolish errand – most of the discs were scratched unplayable.

Months later, I received a cheque that allowed me to begin the restoration – structural only, there was no compensation for personal loss. Goodbye to my beautiful hardwood, blonde oak door; hello to dark oak boards set in a herringbone formation. And while I wish the flood had never happened, it was, in fairness, a great opportunity to get rid of a lot of the ‘stuff’ I had accumulated over the years. As for the loss of vinyl … well, maybe someday I will be able to talk about that, without my own facial waterworks leaking. I live in hope.

Read more: 3 experts on what you need to know about planning a kitchen