Netflix announced on Thursday that prior to the announcement that the series would end after its fifth season, the creators have changed their minds and opted for a sixth, final season

Imelda Staunton will succeed Olivia Colman as Queen Elizabeth II for the sixth and final season of its period drama The Crown. So, we’ll have Colman as The Queen for one more season (season 5) before the baton is passed to Staunton.

Staunton, who has had a career spanning three decades including a notable role as Dolores Umbridge in the Harry Potter franchise, is the third actress to assume the throne, following Golden Globe-winning turns from Colman and Claire Foy.

The popular series will now forge ahead with its sixth season, with showrunner Peter Morgan saying in a statement that it had been decided to revert back to original plans.

As we started to discuss the storylines for Series 5, it soon became clear that in order to do justice to the richness and complexity of the story we should go back to the original plan and do six seasons.”

News from the palace: we can confirm there will be a sixth (and final) season of @TheCrownNetflix, in addition to the previously announced five!

“I have loved watching The Crown from the very start.  As an actor, it was a joy to see how both Claire Foy and Olivia Colman brought something special and unique to Peter Morgan’s scripts. I am genuinely honoured to be joining such an exceptional creative team and to be taking The Crown to its conclusion,” Staunton said in a statement on Twitter. 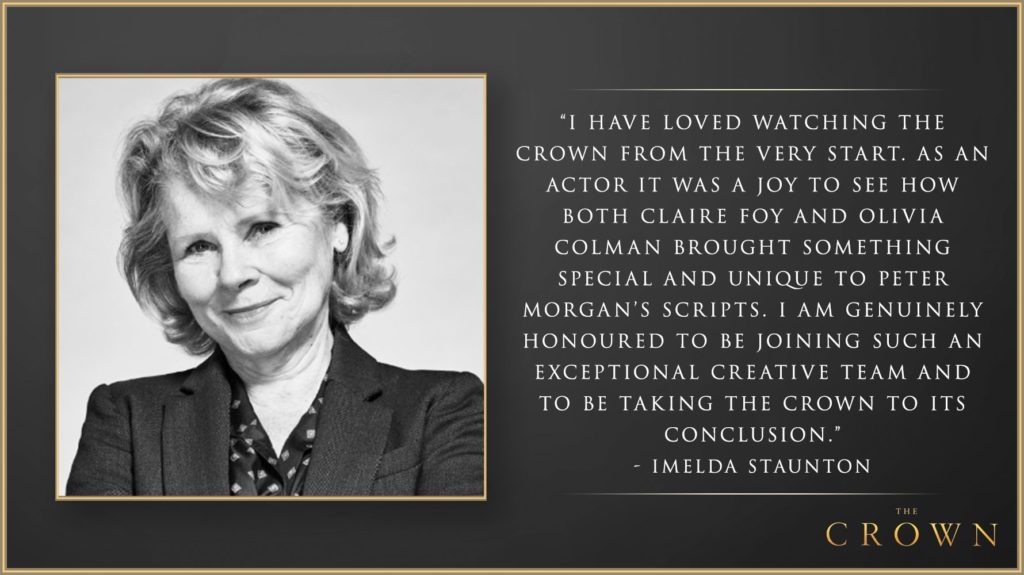 The current cast ensemble, which just collected a SAG Award, will reign for one more season before Staunton takes over for the final season with a fresh cast yet to be announced.

Production has wrapped on season 4, which will focus on Diana and Prince Charles’ courtship and subsequent marriage in 1981 when the late princess was 20. She will be portrayed by Emma Corrin.

The fourth series will continue to span the years 1964-76, but with just one more time period to cover, the series will wrap well before current events and prior to Prince Harry and Meghan Markle’s public departure from royal life.

We also know that The X Files’ Gillian Anderson is confirmed to play British prime minister Margaret Thatcher in season four and her casting indicates that season four will stretch into the 1980s.

Oscar nominee Lesley Manville has signed up to play Princess Margaret in the sixth series of The Crown. Manville replaces actress Helena Bonham Carter as the Queen’s younger sister, a role that has also been played by actress Vanessa Kirby.

In a statement on The Crown’s Twitter page, Lesley Manville said: “I could not be happier to be playing Princess Margaret. The baton is being passed on from two formidable actresses and I really don’t want to let the side down. Furthermore, to play siblings with my dear friend Imelda Staunton will be nothing short of a complete joy.”

Season 4 of with Emma Corrin as Princess Diana was due to air on Netflix later this year, but it’s unclear if its release has been impacted thanks to Covid-19.

Read more: 10 binge-worthy royal TV series and films to watch while in lockdown (that aren’t The Crown)