Nelson Mandela, leader of the anti-apartheid movement and icon for peace and equality has died aged 95. He was fondly called ?Tata? (father) by the South African people, who today are launching into deep mourning for this man, their hero.

Here in Ireland, we have strong ties with Mandela; our empathetic sensibilities and ingrained sense of justice, since the times of our own troubles, connect us on a deeper plane. Some may remember the Dunnes Stores Workers Against Apartheid Movement? On Thursday the 19th of July 1984, a Dunnes Stores cashier in the Henry Street store told a customer that she refused to handle and checkout Outspan grapefruits – taking her personal stance against apartheid while Nelson Mandela was imprisoned. When called up on it by her manager, she informed him that she would not handle any South African fruit that day, or any other day. She was upholding a decision taken by her trade union calling on the boycott of South African produce. Her name was Mary Manning, and that day one other staff member, Karen Gearon, walked out of the store with her. Most of the workers in the store followed, and eight of them remained on strike for the next two and a half years, resulting in a huge increase in awareness for the anti-apartheid cause until the Irish government prohibited the sale of South African fruit and veg in Irish stores.

So we Irish felt the strength of his cause too, as did the whole world, and we all will miss him. 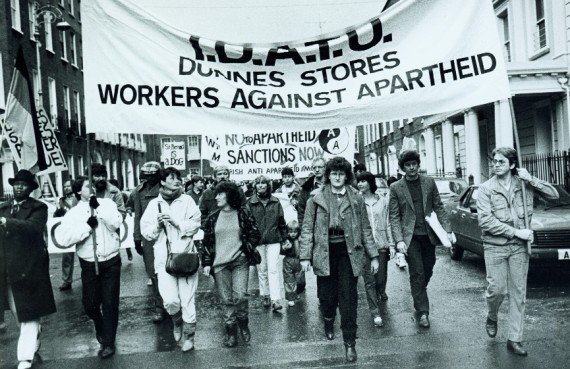 Many words will be written of this man; of his story, his struggle, of his grace, his leadership and of his illuminating legacy. Not many of these will, in fact, live up to the words of the man himself, so below are a selection of his greatest quotes?words to learn from, and live by…

Godspeed Madiba, your long walk to freedom is finally complete. When you lived, many thought you had wings. Now, for sure you do. Gilded ones.

?A leader. . .is like a shepherd. He stays behind the flock, letting the most nimble go out ahead, whereupon the others follow, not realizing that all along they are being directed from behind. It is better to lead from behind and to put others in front, especially when you celebrate victory when nice things occur. You take the front line when there is danger. Then people will appreciate your leadership.?

?No one is born hating another person because of the colour of his skin, or his background, or his religion. People must learn to hate, and if they can learn to hate, they can be taught to love, for love comes more naturally to the human heart than its? opposite.

?I learned that courage was not the absence of fear, but the triumph over it. The brave man is not he who does not feel afraid, but he who conquers that fear.?

?Man’s goodness is a flame that can be hidden but never extinguished?

?When a man has done what he considers to be his duty to his people and his country, he can rest in peace. I believe I have made that effort and that is, therefore, why I will sleep for the eternity?