This mum of twins turned her illustrations into an inspiring book

When illustrator, scientist and writer Maria Boyle, aka TwistedDoodles, started documenting her pregnancy and newborn twin daughters’ first few months, little did she know it would turn into a book. Now the children are three-and-a-half, and her time is in bookshops.

At what point did you decide to start writing this book, and did your expectations match the reality of getting it completed while taking care of twin infants?
I never wanted to write a book about having kids. It wasn’t something in my head. “I’m having kids, I bet this will make a great book.” I adopted a one-eyed cat because I thought she would make great comedy material. She didn’t – she was insane, and I realised that it’s hard to get people to buy into the idea that you have a one-eyed cat. What actually happened with the book was I was originally meant to do a book of cartoons and I said, “Actually, I kept a diary of sorts for the first year – could we include some of that?” Then we included a lot of it, then I had to write additional bits explaining aspects of my life like the fact I’d had cancer or the fact I’m from Donegal, things that I know about myself. I would write small pieces while the girls were napping; in the book, during one of them I’m writing it and dreading them waking up. For me, writing is both company and it’s talking without interruption about something which within that moment you need to talk about, but there’s no one to talk to. That and the fact that I like to use humour to help me cope with life, understand my experiences and connect those experiences to other people.

Was this book a product of working between naptimes and after the kids went to bed; and how did you manage finding any time for yourself and for you and your partner?
Some of the pieces were written in the small downtimes, some of them at night, then after I went back to working full-time in my science research job I’d write them after the kids went to bed or at the weekends. I am textbook definition of “busy” I suppose – I work a full-time job in science, I do the cartooning and illustration, but it wasn’t until I had kids that it became “Well, how are you doing all of that and having children?” which is something I explore in the book because it’s almost like an assumed neglect? I could spend an hour working on an art piece or a piece of writing, but I could also easily throw that time away reading the personal lives of 1990s soap stars on Wikipedia or trying to choose a movie on Netflix. My husband and I do spend time together; sometimes, I’m telling him what 1990s soap stars are doing now, but we don’t go out together a lot – babysitters are expensive. If you would like to help my husband and I get a night out, please buy my book.

Do you have any advice for new mums who are trying to work creatively at home around children?
Wait until they have gone to sleep because mine tend to look for me; and if you like being creative be creative with them – by that I mean, do painting or make things rather than, “I’m being creative with children by pretending I have children”.

Tell me about how you felt at the time your landlord said he was selling your rented home? How did you all cope?
As I mention in the book, there was a lot going on at that stage. I was going back to work, the girls were starting crèche. I’ve realised that life is full of moments where stability is fleeting, and that was one of those. I actually knew my landlord and understood why he wanted to sell – it’s more trouble than it’s worth renting a house, but we had actually moved into that house because our previous rental property was being sold, except this time we had kids. As far as how well we all coped… Well, our six-month-old babies had no idea that we didn’t own our house or that such a thing as a landlord existed – they’d only recently discovered their feet. My husband and I looked at rental properties – there were none – and started putting things in place to buy our own place while our landlord was nice enough to give us a bit of time to panic quietly after the kids had gone to bed.

What obstacles did you face in trying to buy your first home and how did you overcome those obstacles?
It turns out that it is easier to get a house without children – children apparently are viewed as an expense, but were also the major catalyst in us needing a house. We got a bit of financial help from our families, but honestly, if we hadn’t used an amazing mortgage broker, I don’t think we would have gotten anything. Beyond that, there were challenges in actually finding a house we could afford, and being outbid on houses constantly and lack of transparency of how the whole thing works.

When you did move, what added stresses were there that hadn’t been there before kids?
The biggest stresses were before we moved, where we were waiting for the house sale to close and our landlord wanted us out so we ended up in the position where everything we owned went into storage and my husband and I and our two kids and their cots moved into Colm’s friend Derek’s house to exist in the limbo of having a house but also having nothing. And around that, we were trying to work our jobs, get the kids to crèche because we had used our annual leave looking after sick kids or saving those days to look after sick kids which was handy, as one of our kids got sick in Derek’s house. The house move meant that the girls still went to the same crèche, but it was a 30-minute uphill walk to our new house with a double buggy every evening… I had amazing calves.

Do you still have worries about your own health and how have these feelings evolved since you’ve become a mother?
Right now, I’m getting over the flu – not sure if that counts? I get sick quite a bit because it’s hard to keep it all going and kids bring home more from childcare than paper hearts. I think after having cancer, I sometimes think, “What if the cancer comes back?” but then I get the flu or horrendous diarrhoea and sure, that’s a bit of a distraction.

What has been the biggest surprise of parenthood for you?
That I can survive on very little sleep and that I could find moments of contentment so pure they actually scared me.

Is there something about having twins that you didn’t know that you would have liked to beforehand?
That if you do end up using formula with your twins that you don’t need to just keep rotating the same six bottles – you can buy 12 bottles, and that way your life isn’t a constant hell of washing bottles. It’s just a near constant hell of washing bottles. Also, treat yourself to good hand cream.

Any other piece of information that was left out of antenatal classes or you wish someone had told you before the babies were born?
They don’t really smile until six or seven weeks – that’s what they mean when they say the first six weeks are the hardest because they just stare at you blankly. So expect it to be more of the same after six weeks, but the chance of a bit of craic.

You’ve written about your lack of confidence in motherhood and also anxiety about pregnancy with regards work… do you feel differently now, and what would be your advice to other women who face these feelings?
Motherhood is a game you cannot win. No matter what choice you make, there will always be someone or something that makes you question if you’re doing the right thing. I don’t think that feeling ever goes. There are moments where I feel like the worst mother in the world, but I also think I try my best and my kids are loved and aren’t actively being chased by wolves.

What have you learned most about yourself since becoming a mother?
That milk can come out my boobs.

This book also serves as a nice memory of your own pregnancy and your babies’ first year … Will you continue to document like this and do you have any advice to other mums-to-be about journalling as you go?
I haven’t documented as much since, but it’s nice to do, mostly because no matter what you say or what you think, you will forget the small moments because so much happens. Also, biologically, it doesn’t make any sense to remember that having small babies is difficult because then we’d never have any more kids.

What are you hoping readers will get out of this book?
Hopefully, they will find it entertaining and that it will provide more laughs, more nostalgia and more emotion than reading the Wikipedia entries for 1990s soap stars.

I love that you wrote a nice piece about Colm at the end of the book – do you have any words of advice to new mums about communicating with their partners, showing appreciation to one another, and respecting one another as you navigate the bumpy pathways of parenthood together?
If you’re annoyed at your partner, instead of saying, “I’m fine” or going quiet when they’ve annoyed you, tell them. They don’t always get it, but they aren’t mind-readers. Also, remember that the biggest brain changes happen to the primary carer with kids, so they’re sometimes not as intensely into parenting as you, but also it won’t kill them to change a nappy. 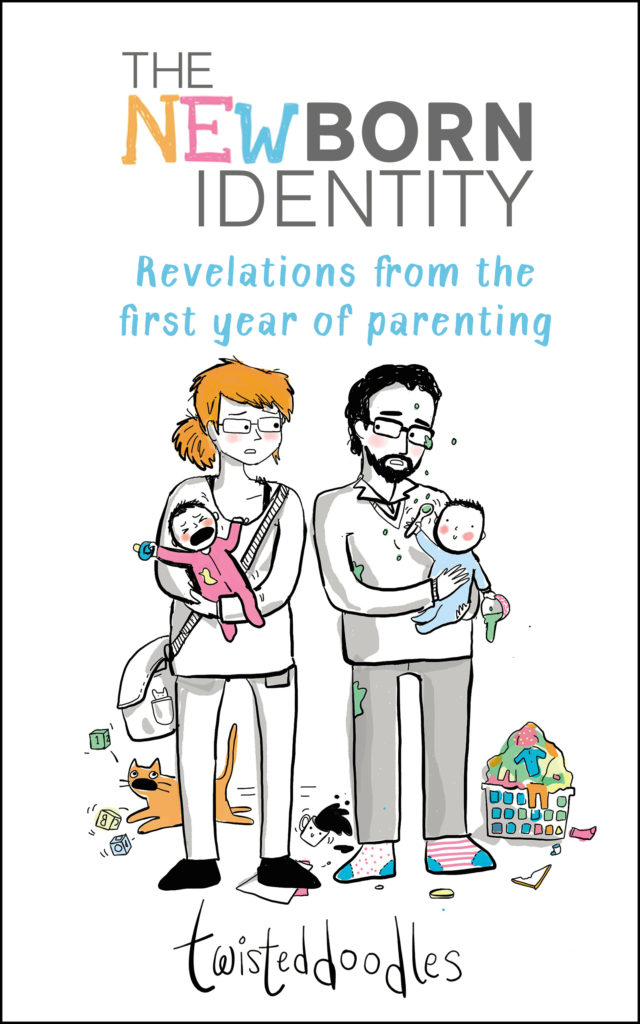 The Newborn Identity: Revelations from the First Year of Parenting by Maria Boyle (Transworld Ireland, approx €15) is out now.