Lyra McKee: The ceasefire baby whose life ended with a single bullet

Tributes are being paid to journalist Lyra McKee who was killed last night during riots in Derry. The 29-year-old was featured in the Forbes 30 Under 30 List, had a growing international reputation and was working on her second book, writes Amanda Cassidy.

She described herself as a ceasefire baby  – too young to remember the worst of the terror of The Troubles in Northern Ireland. “We were the Good Friday Agreement generation, destined to never witness the horrors of war but to reap the spoils of peace,” she wrote in an article in Mosaic two years ago about growing up in the North.

The Belfast-born investigative reporter was praised for “changing lives as she lived and will do so again in death” by Taoiseach, Leo Varadkar. The head of the National Union of Journalists also offered his condolences to McKee’s family and partner, describing the reporter as a “journalist of courage, style and integrity.”

In a joint statement today, the leaders of all of Northern Ireland’s major political parties condemned the murder “in the strongest terms possible” adding that “Lyra’s murder was also an attack on all the people of this community, an attack on the peace and democratic processes.

“We are united in rejecting those responsible for this heinous crime.”

It’s believed that McKee was shot in the head at about 11 pm last night during clashes between police at the Creggan estate in Derry, a traditional Republican stronghold. Early reports suggest that police raided the estate looking for guns and explosives which they believed were hidden for use over the Easter weekend – the anniversary of the 1916 Easter rising. Petrol bombs were thrown and cars set on fire. Shots were fired and Lyra fell to the ground beside a police vehicle. A fellow journalist tweeted  “I called an ambulance for her but police put her in the back of their vehicle and rushed her to hospital where she died. Just 29 years old. Sick to my stomach tonight.”

McKee was a beautifully succinct writer who made a name for herself writing about her experiences growing up gay in Belfast. She focused on wider investigative pieces and had pieces published in the Atlantic and Private Eye. She was also a powerful LGBTQ and human rights activist, along with her partner Sara Canning, who spoke at her devastation at a vigil earlier today in Derry. “Lyra’s death must not be in vain,” she said quietly through tears. “I’ve lost the woman I was bound to grow old with’.

Last night McKee, who was reporting on the disturbances, posted a picture on Twitter showing smoke as police vans drove towards Creggan estate. Her caption was short – she simply described the scene as “absolute madness”. 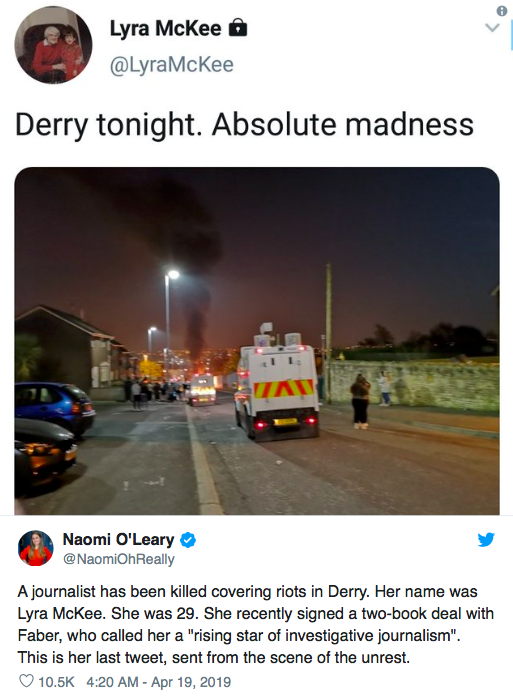 “We will not be dragged into the past”

In a sobering speech today on the steps of Government Buildings, the Taoiseach vowed not to let cowards drag Ireland back into the past. “Twenty-one years ago today on Good Friday, we as a people, north and south, chose peace, democracy, powersharing and ever closer co-operation, and we will not be dragged into the past”.

A GoFundMe campaign has been set up in Lyra’s name with the money raised going to her family for funeral expenses and to decide on her legacy. Lyra McKee’s death was a senseless loss of life, an attack on us all and a threat to the fragility of the peace we’ve now almost taken for granted.

She wrote poignantly in one of her articles; “No matter whether we were old or young, war added new habits to our lives – everyday rituals that wouldn’t be so every day in most countries without war, like not taking your toy gun outside in case a passing army patrol or police jeep mistook it for a real one and fired. Or watching your feet as you walked to school because the police were searching the area for a suspected device. Or getting hit by rocks that came flying over the ‘peace wall’ that separated us from the other side. Yet those things were minor compared to seeing someone shot in front of you, as people older than us had done.”

The leaders are right, there is no place for political violence in Ireland or Northern Ireland today. Lyra died as she lived – charting with honesty and integrity her experiences of life in the North. The fact that she died on Good Friday is spine-chillingly poignant.