It’s hard to believe that the sweeping drama that is The English Patient is 20 years old. Watching it for the first time in too long, it seems the film hasn’t aged a day since its 1996 release. It was one of the last old-fashioned romantic epics to hit the big screen and centres on the journey of the mysterious Count Almasy (played by the dashing Ralph Fiennes), a cartographer who is found severely burned from the wreckage of his plane at the end of World War II. As he is placed under the care of Canadian army nurse Hana (the always brilliant Juliette Binoche) to live out the final days of the war in a dilapidated Italian villa, a flashback story unfolds detailing his illicit love for a married woman, Katharine Clifton (played by the magnificent Kristin Scott-Thomas).

The film stands the test of time for many reasons; its story moves across?time and place, from the borders of Italy, Egypt, and North Africa seamlessly linking its love stories and interweaving subplots, thanks to the masterful script and careful direction from the late Anthony Minghella (he adapted the film from the poetic novel of the same name). And while all the performances are Oscar-worthy, it’s Scott-Thomas who shines in her first ever leading role in a Hollywood film and her best work before her French roles. She brings an emotive, intelligent radiance to the screen and it was this performance that earned her an Academy Award nomination.

Being nominated for a Best Actress Oscar was stressful. At that age I was so anxious and I felt under scrutiny

Twenty years on, it remains her most well-known work, but the actress revealed to The Guardian the making of the film wasn’t without many challenges. For starters, the studio pulled out after the director’s refusal to go with Demi Moore and Scott-Thomas’ insecurity was amplified because she had just given birth to her second child. ?”I’d read the novel and fallen totally in love with it. So when I heard there was going to be a film, I thought: ?God, I have to get on it.? I went to see Anthony, and we had a disastrous lunch,” she said. “I was so nervous, so touched by the story, so overwhelmed. I knew they were thinking of me for Katherine, but that I would be a leftfield choice. I’d just had my second child and had zero confidence.”

She explained she felt the pressures of starring in such a major film when she knew she wasn’t the typical casting choice for the lead role.

“It was my first big part in a big movie. And the studio hadn’t wanted me! So I felt a lot of pressure. I had to do a good job. My relationship with Anthony was quite prickly. He didn’t know how to approach me, and I didn’t know how to be approached. He was a brilliant director, though: he gave the best instructions and was gentle and kind. But I felt very defensive. I loved playing Katherine, but I wanted everyone to back off telling me how to play her.”

It was definitely one of my favourite films to do. It was made from the heart, with integrity, and it’s beautiful

And even then, Scott-Thomas found the love scenes difficult. “Love scenes are really hard. It’s like jumping stark naked into an icy swimming pool. You just have to plunge right in. Then suddenly something will bring you back, and you realise you are stark naked in a room with people who aren’t and they are all gawping at you.”

“A lot of the filming was pretty uncomfortable,” she went on. “We were shooting in the Tunisian desert (Star Wars territory), but it was November and freezing at night. Someone would rush over with a hot water bottle and a down jacket, but it doesn’t do the trick when it’s 4 am, and you’re in a thin dress. But it really was the most gorgeous place.” 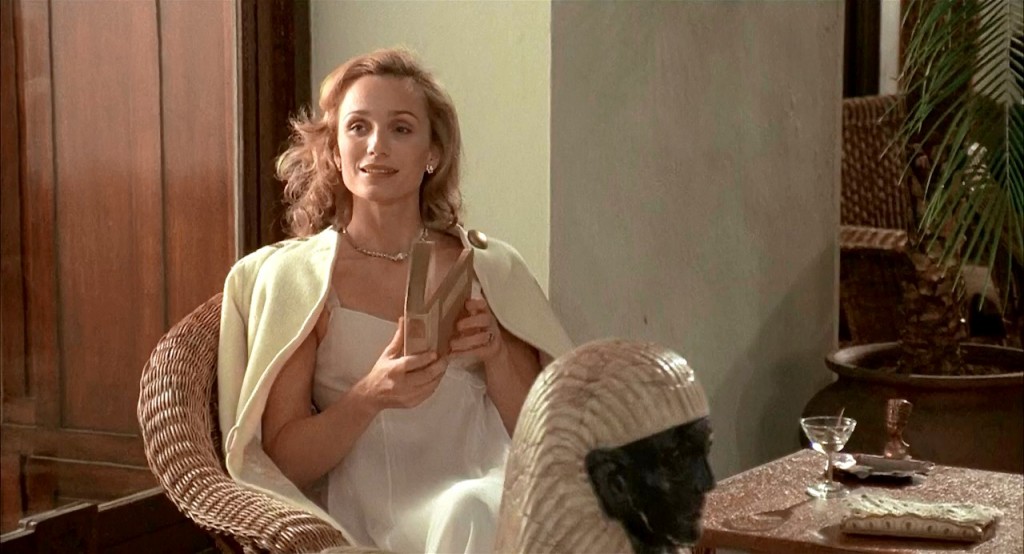 She recalled her favourite moment in the film. “My favourite scene in the film is when Katherine is saying goodbye to Almasy, Ralph’s character. As she walks away, she says: ‘Do you miss me yet?’ He says: ‘Not yet.’ And she says: ‘Ha! You will.’ Then she haughtily turns on her heel – and walks into a pole. And they wanted to cut it! I loved that bumbling quality when she was trying so hard to keep her dignity.”

And two decades later, she’s still in love with the movie. “The success of the film was thrilling, though. I watched it not long ago. It was definitely one of my favourite films to do. It was made from the heart, with integrity, and it’s beautiful.”

It’s romantic, heart-wrenching and utterly brilliant. Add The English Patient to your must-watch lists if you’ve not done so already.