Keira Knightley and husband James Righton welcomed their first child in May. However, it is only now that she is revealing her baby daughter’s name: Edie.

The Imitation Game actress shared the detail in an interview with ELLE in the US magazine’s September issue, and we have to say, although it is none of our business, we heartily approve. Keira, James and Edie – such an elegant sounding triumvirate.

The 30-year-old actress is the cover star of the September issue of ELLE and wears a leather belted blazer on the cover. She looks amazing, although a whole lot different from the floaty floral ensembles that characterised her maternity wardrobe. Remember all that Chanel and Simone Rocha?

The issue itself celebrates the magazine’s American edition’s 30th birthday, a milestone Keira also passed this year, although it wasn’t much fun for her at the time. “I was heavily pregnant, I couldn’t drink?what is the point of having a thirtieth birthday if I couldn’t get phenomenally drunk?? she said, going on to describe a lunch party her husband arranged. ?Then they came back to our house? and they got completely obliterated. They were there until two or three in the morning, absolutely drunk, and I was there eight months pregnant, completely sober. So it was lovely, but it wasn’t what I’d imagined a thirtieth birthday was going to be.” 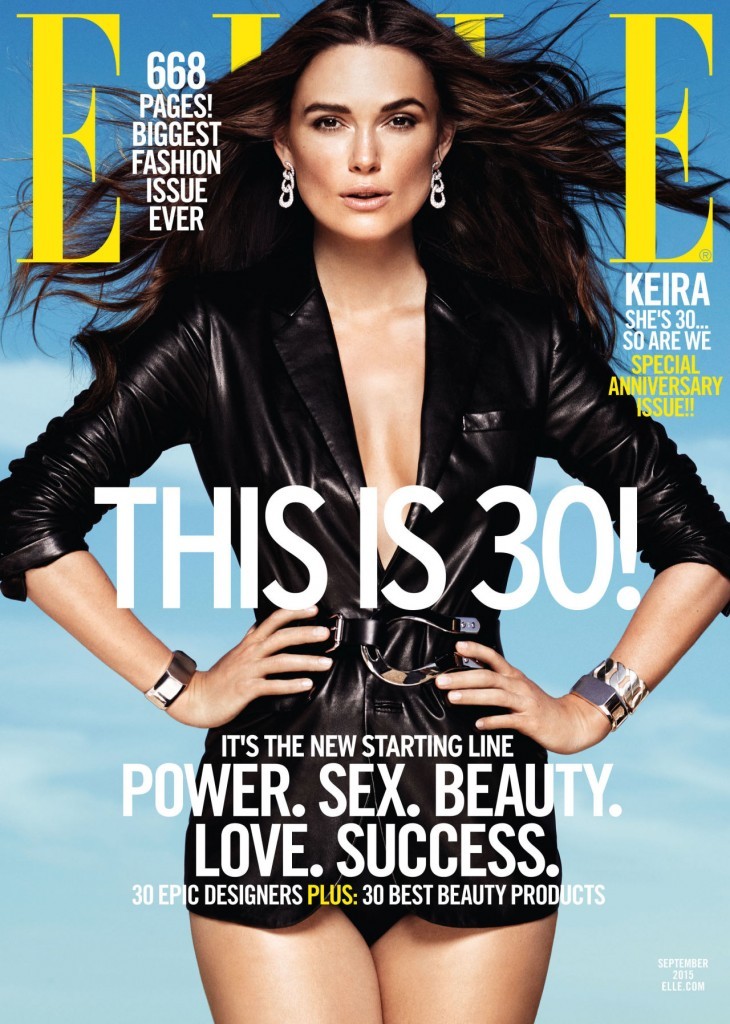 The interview was Keira’s first since giving birth, and like most women who have gone through this monumental occasion, she now has a completely different relationship with her body.

‘? I have to say, as a woman, you hate certain parts of your body. You go through those periods where you look in the mirror and you think, Oh, if only I had different legs or arms or whatever. You go through pregnancy and labour and then feeding the kid and you go, “wow, my body is totally amazing, and I’m never going to not like it again, because it did this, and this is f***ing extraordinary,” she said of the being-a-mother process. Keira also took some time to speak about the intense love she feels for Edie, ?The love thing is astonishing. It’s a very primal, primal love. That’s quite extraordinary.?