I could listen to Michael Mortell’s soft Mallow accent all day long. One of Ireland’s most revered fashion designers, who first rose to acclaim in the 1980s for his stylish rainwear, Mortell is now one of the country’s premier specialists in mid-century design. With a beautiful shop on Dublin’s Francis Street and a new career in bespoke furniture design, Mortell has been sourcing and designing pieces for this project for over a year. 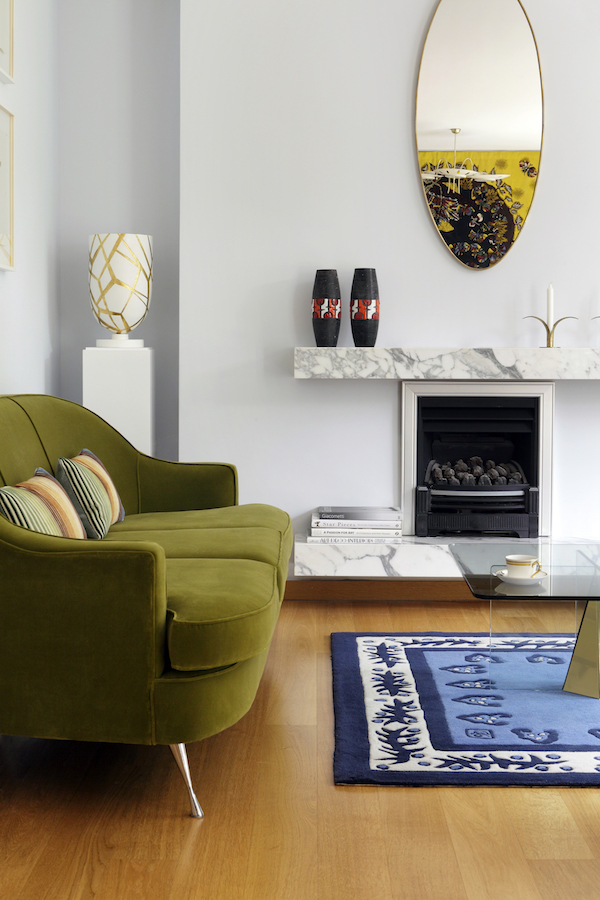 We’re sitting on a green velvet sofa, one of a pair he designed and had made for the client, and he’s telling me about a trip to London he made in the 1980s. “I was invited by Leonora Curry to accompany her to a dinner party in Michael Donnellan’s apartment in Knightsbridge,” recalls the urbane designer. “Donnellan was a famous couturier in the 1940s, and I was blown away by the sophistication and the style of his home: there was such a sense of culture and taste. Each piece in the place was fascinating, and of the finest quality; there was a magnificent 18th century Japanese paper wall screen, a chunky Gothic sideboard, 1st century AD marble busts from Rome and exquisite art. The style of the apartment did not fit into any specific genre – it was simply the perfect distillation of the man’s phenomenal taste, and that struck a huge chord with me.” 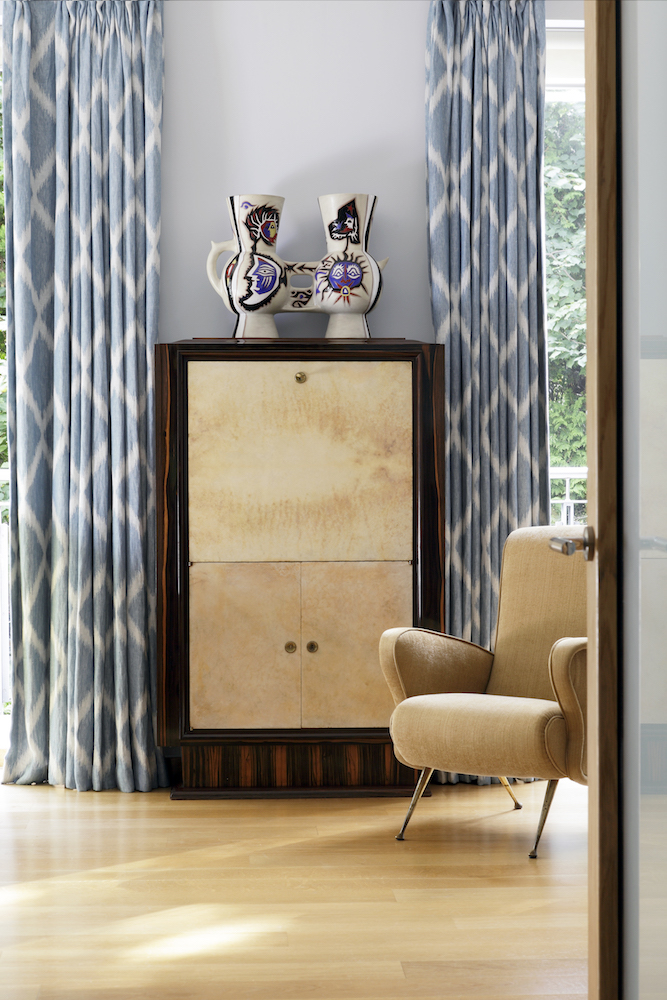 A chord that clearly continues to inform Mortell’s aesthetic approach –as a pervading sense of culture and taste is precisely what you get when you walk into this carefully appointed apartment. From the moment you enter the tall hallway, with its 1940s Pierre Pansard mirror on the wall, framed by a pair of delicate Bagues wall sconces from the same decade, and a magnificent Chinese ceramic horse standing proud on a plinth, you know this is a far cry from your average, anodyne, new-build residence. 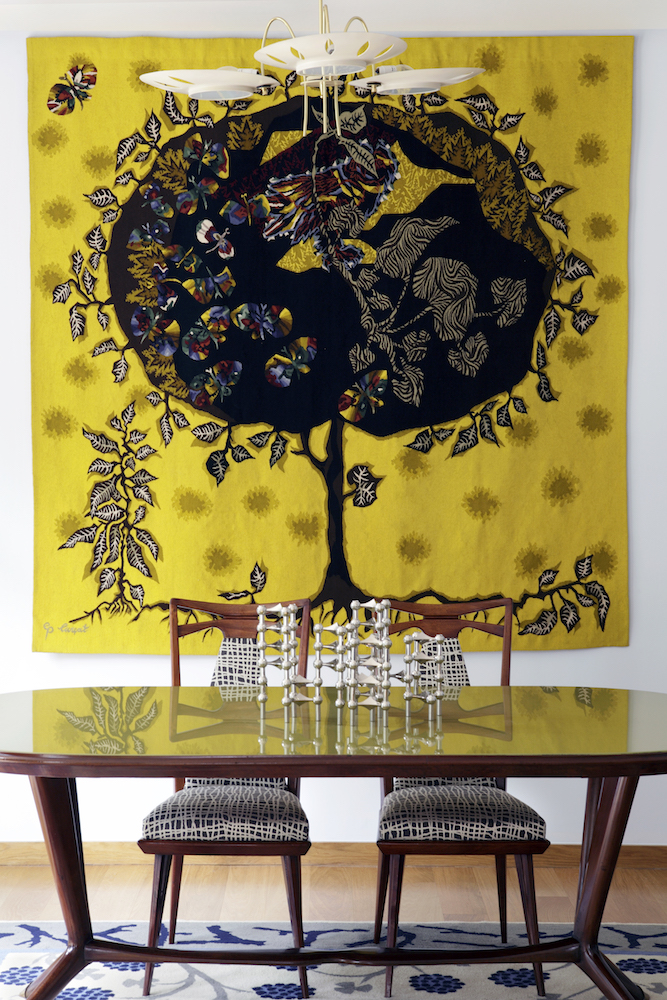 “On first viewing, the exaggeratedly tall doors made a real impression on me.”

When the clients commissioned Mortell, they gave him carte blanche with the space. “Although mid-century is my first love,” he enthuses. “I didn’t want to create an Art Deco environment or a space lifted from the 1940s or 50s. I have an abiding motto: ‘Admire the past but don’t try and live in it’. I simply wanted to create a home that exuded a sense of elegance and sophistication.” 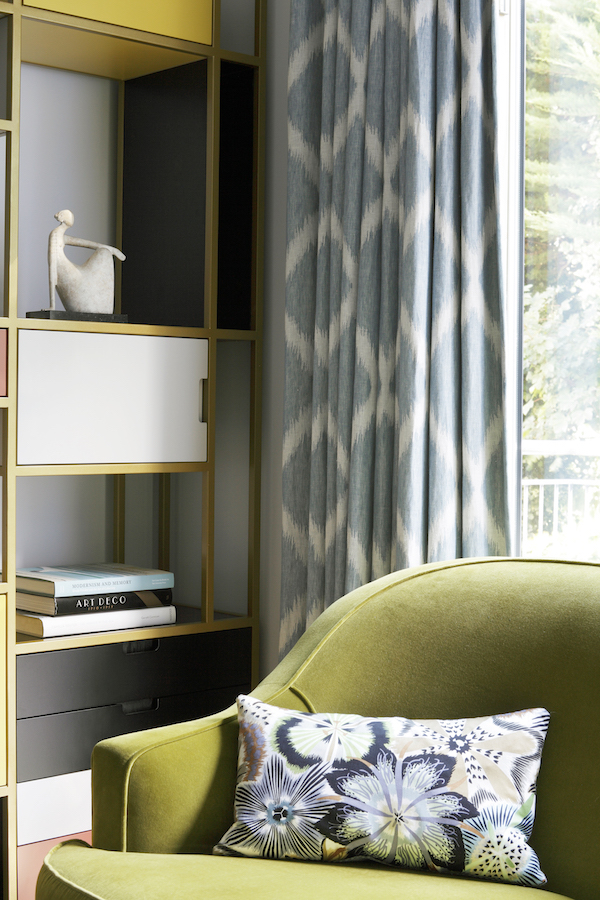 An Italian 1940s rosewood table is inset with glass

Mortell is hugely influenced by the fashion designers of the 1950s –Balenciaga, Dior, Givenchy. “When you think of their style; they were not trying to be avant garde, they were simply motivated by the beauty of form, by pure elegance. That is what I wanted to achieve in this space. For you to walk in and feel beguiled by each piece, individually and together; I wanted to create a feeling of richness and luxury in a space that feels unique.” 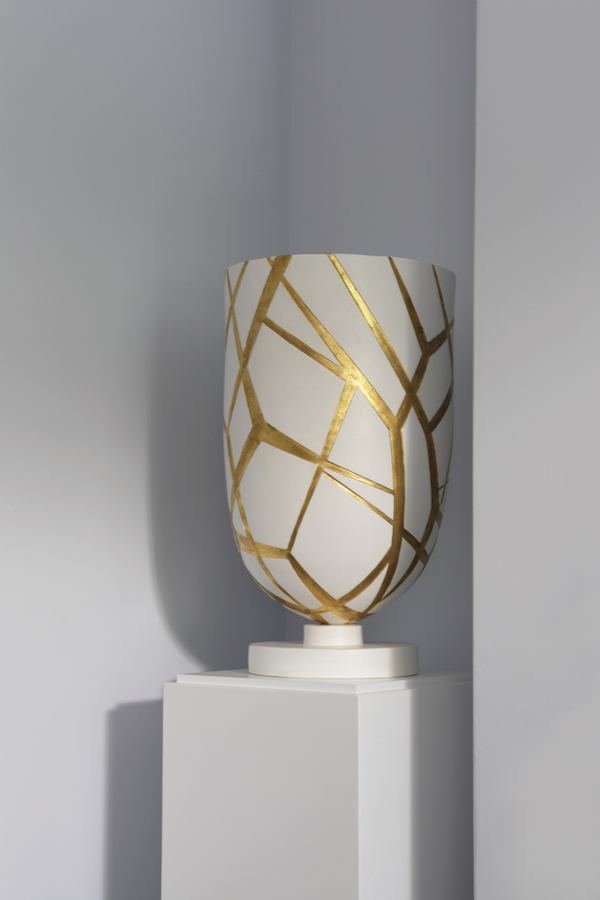 Urn designed by Mortell and made by Irish ceramicist Grainne Watts

And you won’t get much more distinctive than this, as Mortell tapped into his considerable cache of creative talent to design the standout pieces in the apartment himself; the matching pair of lush green velvet sofas in the sitting room, the stunning white and gold ceramic urn, the gilded metal sidetables and the striking terracotta, mustard and black unit in the alcove and are all Mortell’s own. 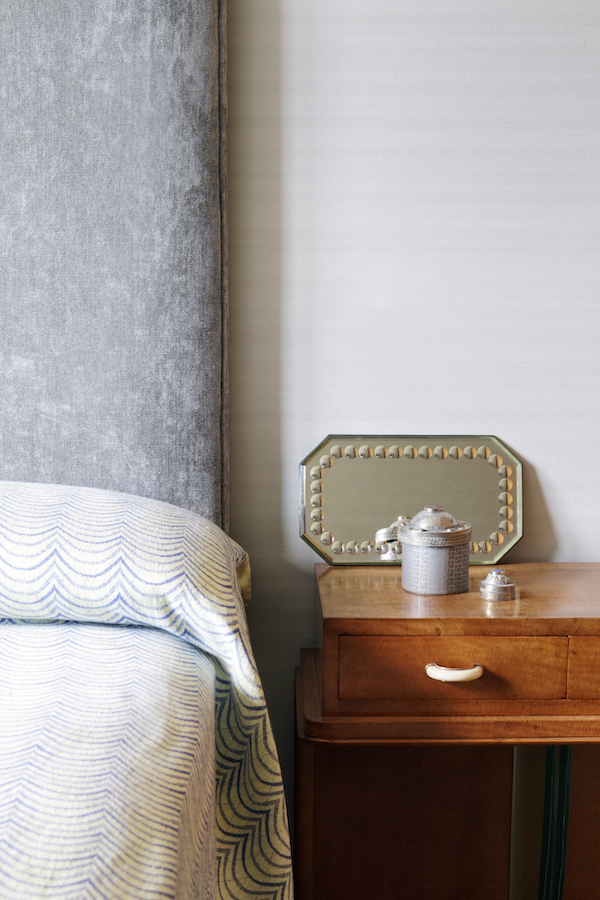 “I had the sketch for the alcove unit in my head for years,” he explains. “Ever since I returned from Paris in 2009, where I had been lucky enough to join friends to view Yves Saint Laurent’s apartment on Rue de Babylon (before Christie’s famously auctioned the contents for astronomical sums). The apartment was obviously out of this world, but it was the Mondrian paintings that I could not get out of my head. The unit is my homage to them.”

It was around this time that Mortell opened his first interiors store in Dublin’s Dame Court, before moving to a premises on Francis Street in 2011. For the established designer, the transition from fashion to interiors was an almost obvious progression. 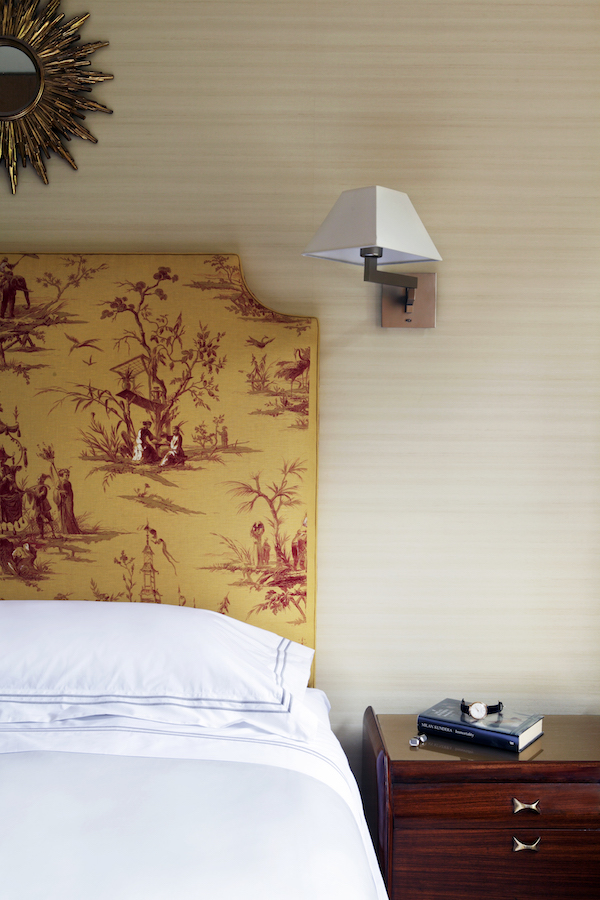 Italian bedside lockers from the 1940s and Francis Brennan bedsheets

For Mortell, whether it’s a Givenchy gown or a Gio Ponti chair, it’s the level of craftsmanship that creates the sublime aesthetic. When he designs a room, he doesn’t pick an item because it will ?go? with another. He chooses each item individually because it is beautiful in its own right. And when placed together they work, because his singular cohesive taste pulls them together. Walking out of this other-worldy apartment, the Dublin cityscape seems rather dull by comparison. With visions of that lush green velvet sofa in my head, I ask him if he has any plans to make more.  Could there be a collection of Michael Mortell furniture in the pipeline? He responds with an enigmatic, “you never know” and a grin. I have a feeling we’re going to be hearing lots more from this creative force in the near future.