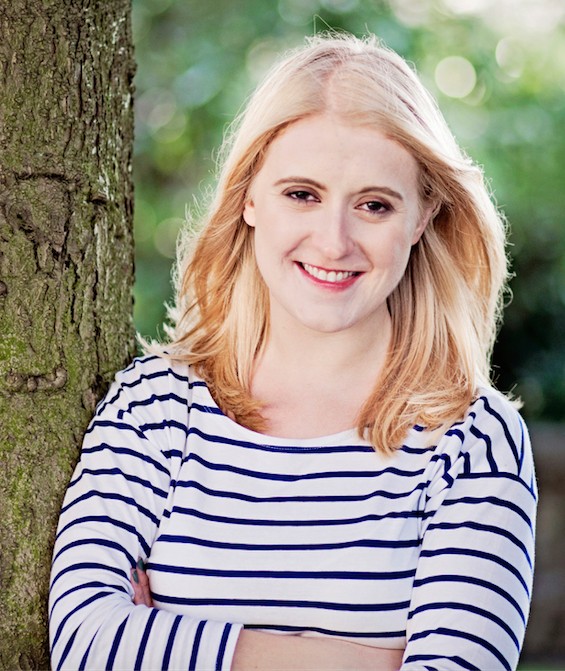 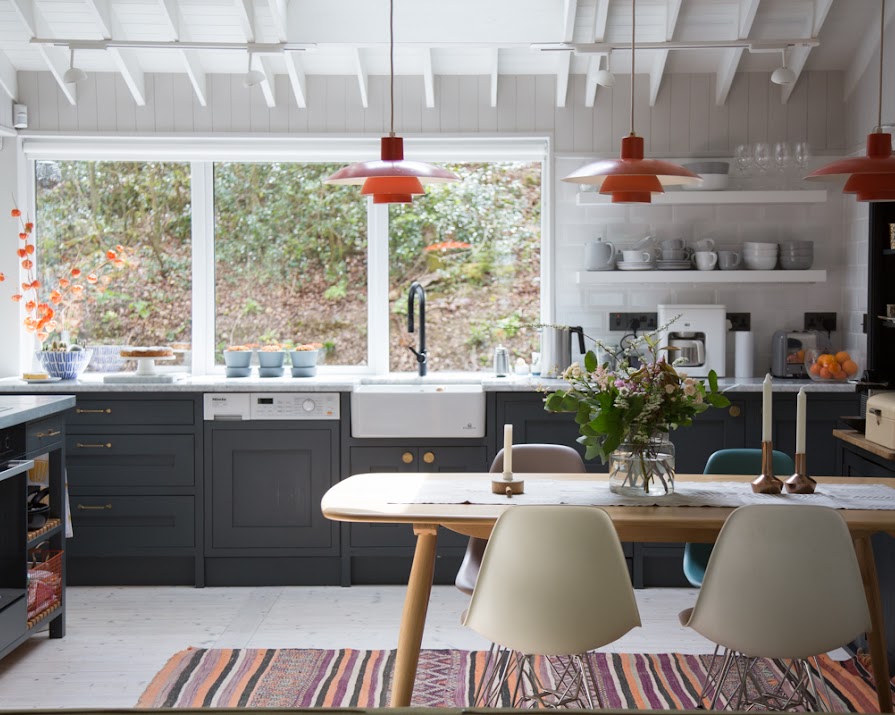 A lovingly restored cabin in the woods is a treasure trove of mid-century pieces, cosy textiles and, bespoke touches, all with a slice of orange.

Embarking on the renovation of a former family home is no mean feat. For interior designer Egon Walesch and his architect-trained partner Richard Goodwin, it took considerable time and consideration – four years, in fact. Four years to plan, followed by a one-year build and fit-out. “We spent quite a long time thinking, planning and refining the design,” Egon explains. “We then spent a good while looking for a builder that we would be happy to entrust the project to. Luckily, we came across Liam Clancy, who got what we were trying to achieve, and we knew we could trust him to do a good job on it.”

The house is painted a sympathetic shade for its setting with smatterings of tulips.

Living and working in London and Ireland, the pair was keen to ensure that their lakeside retreat became a real home for them, rather than the holiday home it had been. “The priority really was to create a place that we would want and yearn to come to. We realised that we could do the job fairly quickly by cutting corners and not worrying so much about the finishing,” Egon says. “However, we knew we would be unlikely to want to spend time in the finished result, so we took the decision to put the required time and effort in to get what we really wanted.”

A 405 Line throw by Eleanor Pritchard and Melin Tregwynt cushions.

From living there, Egon knew exactly what he wanted to change and what he wanted to keep. “Definitely the feeling of a simple timber building in the woods was worth preserving, so we did minimal intervention externally.” Inside is another story. “It was all about tweaking things to make the most of the view and the location, and opening it up to make it feel more spacious.”

The couple took inspiration from the lake houses and cabins typically found in Scandinavia, but also from further afield. “We had a fantastic holiday in New Zealand a few years ago, where we stayed in a number of baches [short for bachelor pad] which are holiday homes in beautiful rural or coastal settings.”

Although there is a lot of wood, much of it is painted or stained. “I didn’t want it to feel too much like a log cabin or a pine sauna on the inside,” Egon says. “I definitely wanted to avoid anything twee or too countrified. I’ve been living in the big smoke for too long to do without creature comforts!”

Egon’s trademark style is a mixture of old and new. “I find interiors that are only filled with one or the other a bit boring. I think the juxtaposition of the old with the new is just much more interesting. Given that the house was built in the mid 1960s it made sense to use mid-century and modernist furniture and accessories.”

The bed is Smoke by Loaf in Thatch fabric. The bed linen is Yves Delorme Zig Zag.

Creating the home was very much a team effort. “Richard is a great source of support on all my projects,” Egon says. “We’ve been together long enough to know how we think and work and we are able to bring complementary skills to any project. Because of his architectural training, he’s very good on structural calculations and detailing.” The pair worked collaboratively on the design and planning, while Egon led on the project management. “I’m glad we did it together because the end result feels like our home that we have created together.”

There was quite a lot of renovation work completed on the house. “Originally, it had small windows, so that when you sat down in the sitting room, you couldn’t even see the lake, so putting in floor to ceiling windows and doors was one of the first decisions we took.” Following that, they reduced the hallway and created an open plan living space to include the kitchen, dining and living room.

A Basalt sink by Marble Mosaics sits atop a bespoke pedestal.?

From there, the original ceiling was removed, and the space was opened up to the rafters. This meant rationalising some of the beams and putting in additional purlins for support. “The original ceiling was quite low, making the rooms feel a bit claustrophobic. It made a dramatic difference to the feel of the place, instantly making it feel much airier and bigger than it actually is.”

After that, insulation and heating were priorities. “There are additional electric radiators in each of the rooms plus underfloor heating in the two bathrooms, which, along with some of the lighting, we can control remotely via an app,” Egon explains. “This means we can ensure the temperature stays above freezing if we aren’t there during a cold snap and we can turn up the heating when we are on our way over from our home in London.”

A vintage 1970s Lakelands Tourism map sits above the bath.

The large cedar deck was added on the lakeside, which is the perfect spot for entertaining during warmer weather now that Egon has been spending more and more time by the lake. “The majority of my interior design work is still in London, but I’ve now got some clients in Ireland too, which is great. I’m hopeful I can build on this to have a diverse portfolio of projects on the go across both countries.” The perfect reason to spend even more time in this tranquil woodland retreat.