Hilary Duff Gets Rejected On Tinder, Makes Us Feel Normal

It’s always refreshing when we see those in the public eye leave their magical celebrity world and find out what its like for us normal folk. Yes we know that they usually are just normal people with extraordinary jobs and talent and all that, but it isn’t the same. So when singer Hilary Duff announced that she decided to pack in the Tinder app because she’d had too many rejections, we couldn’t help but feel a little relieved to know that at least one celebrity has faced the pitfalls of online dating. She’s one of us now.

Duff revealed that she had been rejected by seven guys following a live radio experiment, according to The Mirror.? She uploaded her picture but didn’t reveal her true identity, obviously. ?She asked if anyone wanted to join her for pizza (we can’t understand who wouldn’t) before looking glum when no man took her up on the offer. We’re more than a surprised at this, but even celebrities don’t have magic pulling powers it seems! Even if she didn’t post up her last name for the radio challenge, we’re surprised no one twigged it was her. Ah well, it’s their loss Hilary! She has since confirmed she doesn’t use the app any more. You had your chance guys! 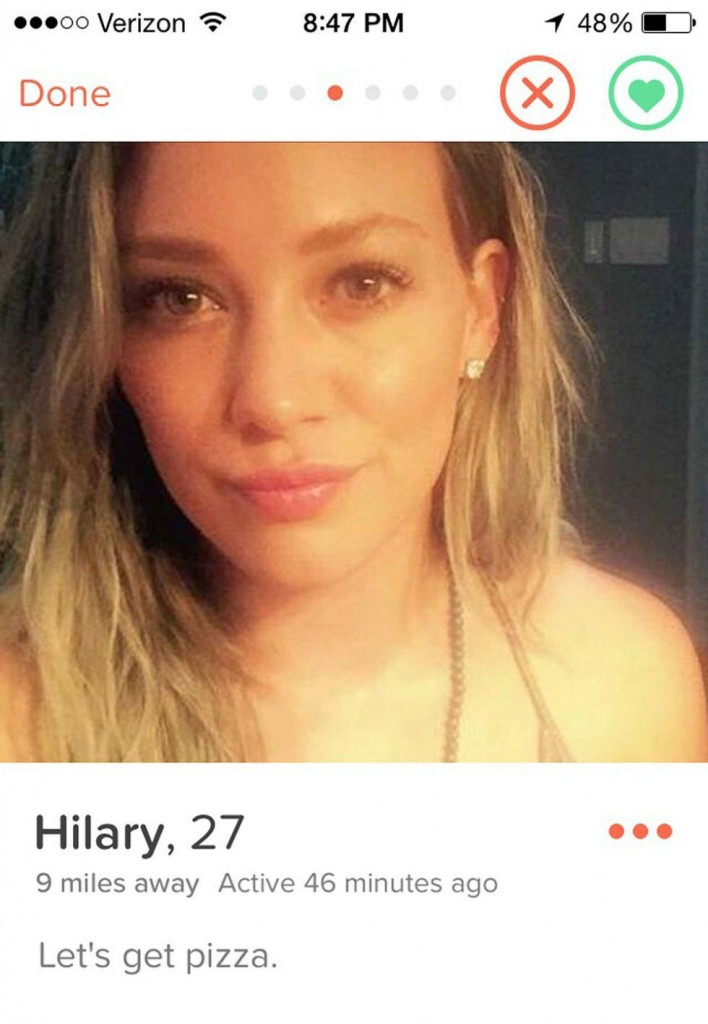 “I’m not still using it. It was really fun for me for a minute; I wanted to experience something totally normal and also shock people,” Duff said. “No one thought I was really on it – and I was really on it!” the singer and actress told People. The star had said previously that she was going to use the dating app to try to find love following her split from husband Mike Combrie. ?She had some initial success with it in the beginning, and went on one date (bowling apparently) and subsequently used it for a music video of hers. The radio challenge obviously put her off the whole thing, but fair play to her for trying it out on live radio.

Via People/ The Mirror