The below will contain some spoilers about The Handmaid’s Tale series, so if you’ve not caught up with season one (just finished airing in the US with the finale airing on Sunday on Channel 4), click away now…?

Only three episodes into the first season of the ground-breaking TV adaptation of The Handmaid’s Tale, it was announced we’d get a second, set to air in 2018. Rejoice! The series defied expectations, not only due to the craftsmanship needed to seamlessly?translate such source material to the screen but because of the changing times we now live in. It was hailed as a frightening vision of the future when the book was first published but now seems terrifyingly relevant – yet we’ve been glued to every episode. ?But what can we expect from the new season? Here’s what we’ve managed to gather from the corners of the internet…

Things are going to get worse, but we’ll finally get answers?about that ending. ?This, according to Elisabeth Moss, who tells The Pool?that season one only tipped the iceberg of what’s to come. ?Season two is going to be bad too, really dark.? And she said she had read the plot for the new season which made her “jaw drop.” At the very least, we’ll get some clarity over the ending, both terrifying and infuriating, as we never really found out what became of Offred when she was dragged away…

Author Margaret Atwood will continue to develop the characters. As Offred’s storyline continues in season two, Atwood, who started writing The Handmaid’s Tale in 1984 will have a greater role in the script’s development. This is reassuring and logical as the series has effectively used the bulk of its source material. ?I think I will be more involved in the second season because we will be in uncharted territories, so more invention will have to take place,? she explained to?Entertainment Weekly. Imagine the dark places she’ll take the world to next. Scarier than Trump? Hell yes is the answer.

The book itself will still heavily influence Season 2.?”Everybody says, ‘You got to the end of the book!’ And I’m like, ‘No, there’s still a whole bunch of stuff we didn’t even touch,’ showrunner Bruce Miller told the NYT. “I read the book a lot. I pick out clues here and there, not so much to alter it, but to say, ‘O.K., let’s logically extrapolate it.'” 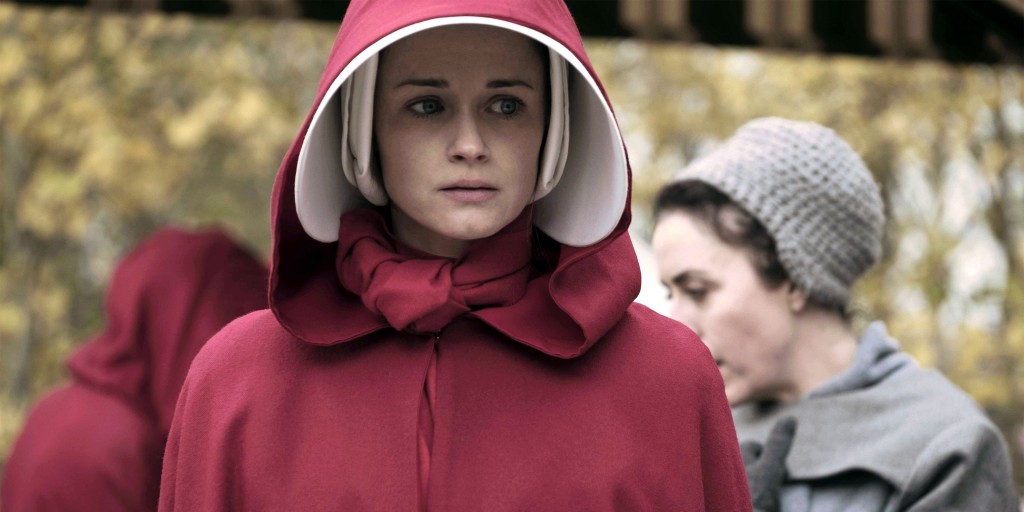 Alexis Bledel will return as a full-time cast member. Hulu announced Bledel had been upgraded to series regular from “guest star” in Season 1. Last time we saw her in the fifth episode, she’d been apprehended by Gilead officials after stealing a car and running over an armed guard. Given that her storyline was enhanced?from that of the book, it makes sense that hers was a character that could be developed into a significant plot point.

Atwood wants Drake (yes, that Drake) to be in season 2. This was brought up in an interview with the Boston Review and could potentially be one of the best things ever. Like Atwood, the singer is a Canadian.?”I have of course met people who have met Drake,” she said. “But you have to realise how old I am. I’m not likely to go to the same parties. Or many parties at all, to be frank.”However, at the end of the interview, Atwood brought up the casting notion again. “I hope [we run into each other again], and you’ve given me a new idea. Drake in The Handmaid’s Tale!” Please let this happen.

The Waterfords will be back. “They’re still a part of our plans for Season 2 but in interesting ways,” Miller told THR. ?In particular, he mentions Joseph Fiennes’ Fred: “Season 2 will explore, “What is the commander doing all day long, and what is his life like? What are his responsibilities?” Miller told NYT.

It will have 13 episodes instead of 10. More episodes can only be a great thing.