Got Ink? Are You Required To Cover Up In Work?

An article appeared on ft.com?this week highlighting an issue that we thought had died a long time ago: the negative interference between tattoos and the job market. Once considered as counterculture, more people than ever?are going under the needle as a form of self-expression; with almost half of all Americans (42 percent) having at least one tattoo, along with 29 percent of all British people, and 36 percent of Irish people investing in permanent art too. In 2016, why is it that we’re largely still required to cover up for employers? 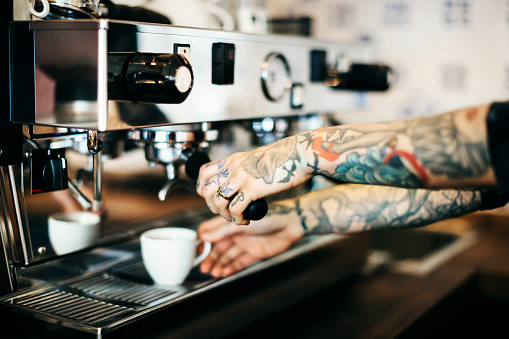 In the past, tattoos were traditionally worn as cultural symbols that often represented certain ideologies. As society developed, so too did the meaning around tattooing, until eventually it was considered as a mainstream ‘norm’ to have inked skin. Not everyone has unified thoughts on tattoo’s place in society, however, and with the rise in?ink addicts?comes the rise in discrimination in the workplace. The increasingly popular (and expensive) hobby is still causing hassle for employers who continue to encourage employees to cover up during working hours.

According to Supporting Tattoos and Piercings In The Workplace, STAPAW, an activist group aimed at raising awareness?about discrimination of piercings and tattoos in the workplace, 76 percent of employees feel that tattoos and piercings restrict their job chances. However, only four percent of those employees have actually faced discrimination because of their inked skin.

Kathryn Kirk?is a young professional tattoo artist from Ireland and frequently gets asked by clients whether or not their job prospects would be affected by tattoos. Kathryn, who is tattooed, agrees that while tattooing is becoming more mainstream employers still have the right to deny someone a job if their image doesn’t suit the companies image.

“I do think to a certain degree employers have the right to do that too, even if it conflicts with our ideas. It can also have a lot to do with the tattoo subject matter. for example, we had a girl in once who got ‘live for the sesh’ on her forearm..so I could understand if her employers asked her to cover it. Tattoos are still very polarizing amongst the general public so it’s understandable if a company doesn’t want to bring that into their business and repel any business or customer types.”

If you are thinking of inking up, Kathryn warns against tattooing highly visible areas that will attract unwanted attention; “I think that if someone puts a tattoo on themselves in a visible area such as hands, face, neck, etc., or have tattoos with inappropriate subject matter, ?then they should also accept that these tattoos can affect their work environment. In the industry, these tattoos are called ‘life ruiners’ for this exact reason. It’s definitely a tug of war between tattoo lovers and employers, ?but I think there is a fair case for employers to give a bit more slack to the issue; especially since tattooing has escalated past the lines of taboo from say 10 years ago.”

The airline industry is one of few areas which ban visible tattoos.

As it stands, companies are within their legal rights under employment law to not hire someone because they have a tattoo. But why are those perceptions in place? Isn’t it time that corporate employers understand that society is diversifying and progressing to the point where our abilities should not be based on appearances? Or is it that we live in an aesthetically-driven world?