Why Ginger Spice was the best Spice, way ahead of her time

That’s Mel B impersonating Geri Halliwell when she’s playing Scary Spice who’s dressed up as Ginger Spice in the 1997 film Spice World, a largely tongue-in-cheek comedy that sees the girl group fighting the evils of fame and media, while promoting the importance of friendship. A movie that was absolutely slated in its day by critics, it has reached cult levels here, resulting in boozy cinema screenings filled with adults whose childhoods were enriched by the music and the spectacle of  the Spice Girls.

For most of the film, which celebrates its 21st birthday this year, Geri’s feminism and portrayed bookishness is made fun of by all of the other Spices. When she tries to teach Scary how to play chess, her patience is tested with Scary’s total disregard for the rules of chess. When she throws out a fact about the manta ray and how it’s the largest fish in the world, the rest of the Spice Girls roll their eyes – led by Posh, who wants to be known for more than just liking clothes – like she’s Ross from Friends, except she has a much better wardrobe. The best wardrobe in the movie, actually. Sorry Posh.

Rewatching Spice World, there’s a strong case of Ginger Spice being the best Spice, a Spice that was way ahead of her time. In her club kid meets Marilyn Monroe attire and engine-red hair, she plays the role with an acute self-awareness and Barbara Windsor levels of camp, while projecting a star power that the rest of them hadn’t really found in themselves just yet. Despite the fact that Geri was the only member of the Spice Girls without any stage school training, it was like she stepped into the role of Ginger as a fully-fledged celebrity.  She sought after fame, as she tells us in her 1999 autobiography If Only, and spent some time as a game show TV dolly in Turkey before moving back to England where she spotted a recruitment ad in The Stage Magazine in 1994. It read “WANTED: R.U. 18–23 with the ability to sing/dance? R.U. streetwise, outgoing, ambitious, and dedicated?” and by the summer of 1996, we finally saw the product of that ad; Wannabe.

While there’s an argument for Geri’s brand of feminism being quite flimsy, the fact that she decided to push it as part of her brand from the get – go means that she was quite ahead of her time

Geri has described herself as the ultimate wannabe and while that doesn’t sound too strange now when all we see is wannabes on reality shows and The X Factor, but that wasn’t what it was like in 1996. On the back of the grunge era and Britpop, where success was deemed to happen by accident, the Spice Girls were hungry for success, by any means necessary.  As one of the loudest members of the group,  in tandem with Mel B, Geri was the band’s spokesperson and came up with the band’s slogan; Girl. Power. Fun, friendship and empowerment were at the Spice Girls core. While there’s an argument for Geri’s brand of feminism being quite flimsy, the fact that she decided to push it as part of her brand from the get – go means that she was quite ahead of her time, especially considering that big pop stars like Katy Perry, Beyoncé and Taylor Swift distanced themselves from the F word for so long. Geri’s feminism being made fun of by the other Spices, just proved how uncool it was back then for a mainstream celebrity to weave it into their brand, when it’s done without any hesitation now.

Of course, when Margaret Thatcher died in 2013, Geri tweeted that the former British Prime Minister was “the first Spice Girl, the pioneer of our ideology”, so her arguments wouldn’t last long in this fourth wave of feminism but as Ginger, she nailed the third wave. She was all about individuality. The cynic in all of us is probably saying “Sure, individuality. She was in a band that commercially designed personalities for five different women to set to a global market” but at eight-years-old, that isn’t what we saw. We saw five women who all had their own ruckus to make and we were the lucky ones who got to tag along for the ride, soon to figure out what our own ruckus was going to be. 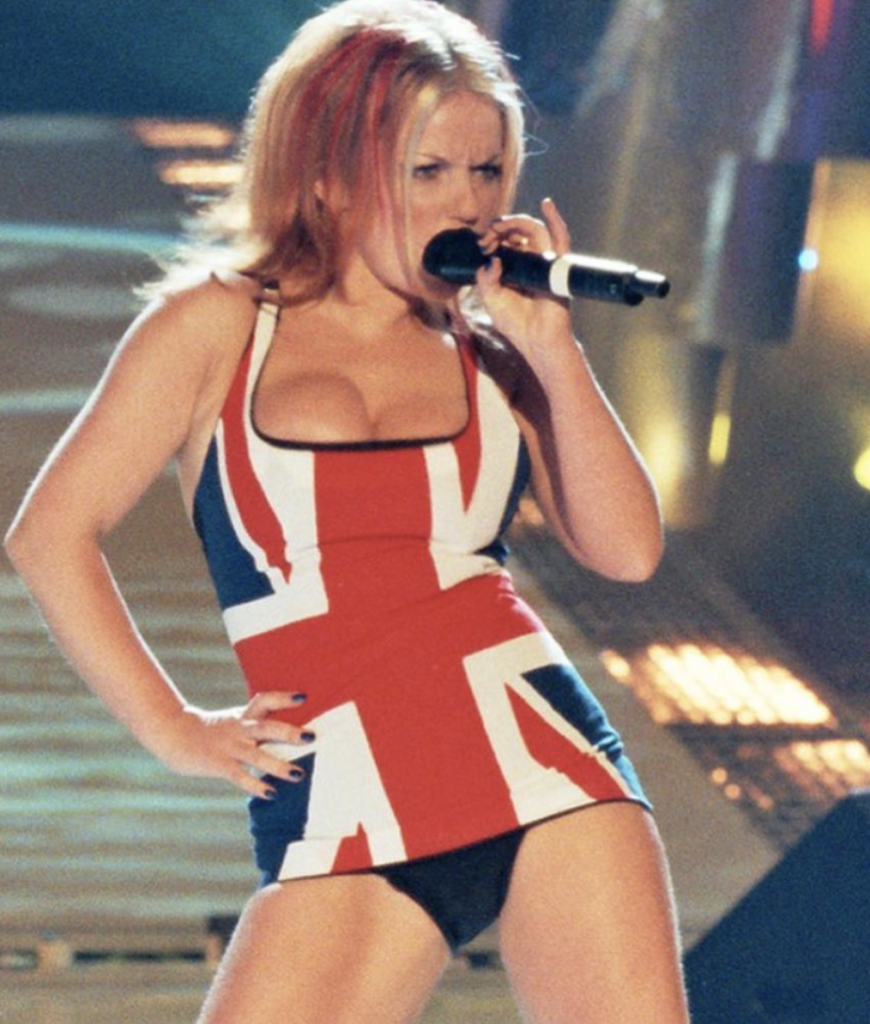 Girls dressing up for girls

Being a Spice Girl was rarely about being sexed up for the boys, this was a band of girls for girls. Girls dressing up for girls. They were playing the same game that we all played with our friends but they just had a worldwide stage instead of hairbrushes as microphones. Where we had a dress-up box of our mum’s old clothes, they had an actual budget for whatever the hell they wanted to wear. When you consider that despite having a world of clothes to choose from, Mel C resided on tracksuit bottoms and Liverpool jerseys, Emma took on pigtails and every shade of pastel and Victoria reclaimed the little black dress, they played it safe in comparison to Mel B and Geri, who both took playing dress up as far as they could. But it was Geri who made the headlines for her outfits, and for pinching Prince Charles’s arse.

As Geri’s platforms went higher, her corsets became tighter, her skirts and hot pants became  shorter and her prints became bolder. She dressed like she intended to stay out all night and in 1997, she turned a Union Jack tea towel into one of the biggest pop moments that the Brit Awards has ever seen.  She paid homage to icons from the 50s, 60s, 70s and 80s, in turn becoming one of the biggest icons of the 90s. She toyed with the political, she challenged the norm and she championed individuality.  So while I mostly played Posh or Sporty in the playground, simply because my hair was brown, the Spice I most want to be when I grow up is now Ginger because what she stood for then makes the most sense to me now.

Spice up your life with this weekend’s event guide

The Spice Girls in Stoneybatter. What a day to remember.

Victoria Beckham is launching her own makeup YouTube channel