John Adams, long the darling of discerning Dublin design shoppers, has used his 120-year-old Drumcondra redbrick as a blank canvas on which to unleash his decorative heart’s desires, in alluring hues of grey and green…

As owner of one of Dublin’s most fashionable homewares shops, Article in Powerscourt Townhouse Centre, John Adams knows a thing or two about design and aesthetics. Operations manager of Habitat in Dublin for 15 years, followed by a stint managing Oxfam Home on Francis Street, John opened his award-winning shop in 2010. From the very beginning, he has stocked it with a beautifully curated selection of stylish objects for the home, and it’s clear he has channelled his knowledge and love of great design into this beautiful new home in leafy Drumcondra. “The house faces east-west, which is lovely,” he says. “We get morning sunlight in the kitchen and bedroom and afternoon sun in both our sitting rooms at the back.”

John and Joseph bought the house in December 2014 and embarked on a large renovation project that would give the handsome Victorian house a fresh and vibrant lease of life. They knew the building would require much reconfiguring and modification, but the elegant proportions, light-filled rooms and original fireplaces proved an inspiring blank canvas. Interior architect Gillian Sherrard was brought in to collaborate on the project. “I had created a lookbook of stuff I liked and the direction I wanted the house to go in. Gillian showed me her house online and, although it’s a little bit different, the similarities are there.” 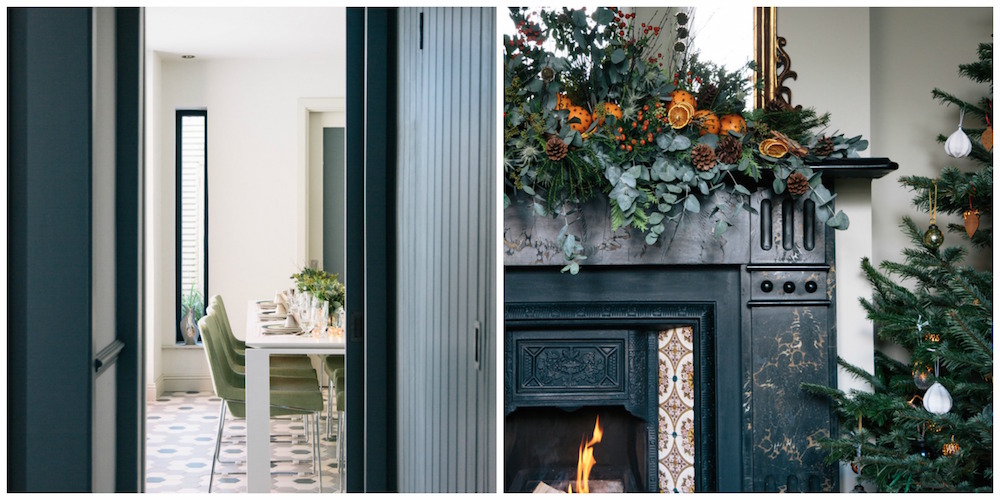 John is clear about his likes and dislikes, and one look around his house confirms that he has a natural talent for putting colours together. “Working in the industry has definitely been an advantage. It’s easy for me to visualise what things may eventually look like.” He says that while he’s the one with the design expertise, Joseph has complementary tastes. “The house was a consultative process between us both, but I probably steered most of it,” he laughs.

A grown-up palette of greys and greens has been used throughout, from the walls to the tiles and tableware, in a deliberate attempt to ensure that the house flows. “That’s the advantage of being able to do up the house in one go, as opposed to living here and decorating room by room.” John has chosen to build on his chosen colour scheme of grey, green and cream for his Christmas décor this year, eschewing the more predictable red and holly green combo. “For me, decorating for Christmas is about adding a layer over what you already have,? he explains, ?choosing a single unifying colour to give a cohesive look. This year, I’ve gone for sage green because I like a more natural look – something that flows with the existing décor and is understated, which would be my instinctive style.”

This will be the pair’s first Christmas in their new home since they moved in last May, and happily the house is completely as they envisaged it. Meath-based KNL Construction was contracted in to do the heavy work. The couple decided that the upstairs bedrooms had such wonderful light that they agreed to create a second, larger living room upstairs. They got rid of two of the house’s four bedrooms to do so, resulting in a spacious yet cosy living space that they’re delighted with. When you own one of the most written-about homewares shops in Dublin, you just know the owner’s going to have an enviable book of contacts to tap into. The vibrant drapes that hang in both sitting-room windows, French blue velvet downstairs and mustard upstairs were made to measure by Noel McEntee, who often does refurbishment and upholstery work on pieces John sells in the shop. 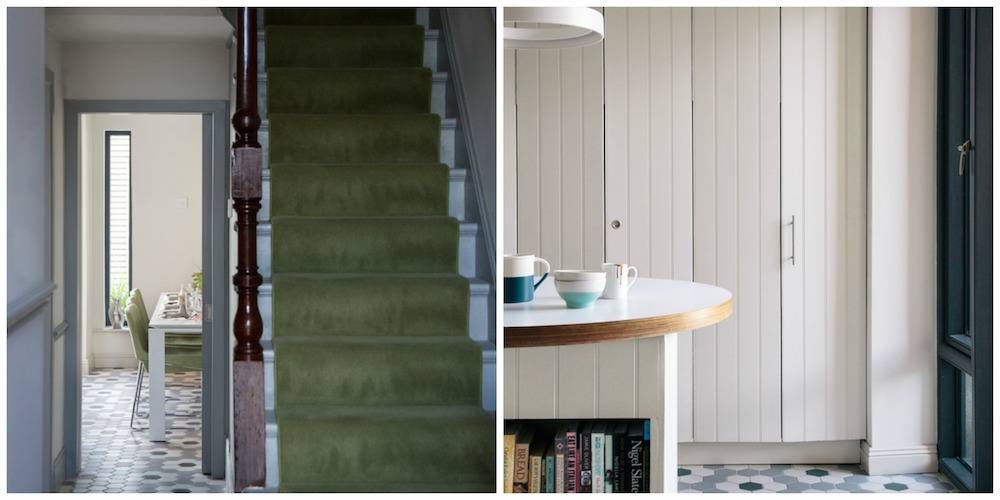 Pinterest proved a key source of inspiration too, with John crediting his kitchen’s striking floor pattern to an image he saw on the online moodboard resource. The unusual kitchen features a mix of plywood and tongue-and-groove units, created by Brendan McGuinness. Take a closer look and you’ll see that much of the kitchen can be hidden away behind concertina doors. “The space blends in without feeling too much like a kitchen. A number of people have walked into this room and asked, ‘Where’s your sink?'” The couple enjoy entertaining friends and like having plenty of space to do so. They find that the hidden kitchen is great for closing off the mess at dinner parties (pull the doors back and you have access to everything in one go).

Despite the trend for modern, open-plan kitchen-dining spaces, John explains that their separate kitchen and dining room was a conscious decision. “I prefer separate spaces, as I’m not necessarily a performance cook. I like to go away, do my stuff and then present it to guests to eat in the dining room.” John owns lots of great-looking design pieces by Habitat, collected over his years of working there, and these are dotted throughout the interior. The house’s large sash windows, original tiled fireplaces and impressive high ceilings make a perfect backdrop for the contemporary facelift, although the look of old and new has ben carefully balanced with select vintage pieces. Bursting with personality and verve, the Dublin 9 house’s transformation into an original and welcoming home is now complete.

John and Joseph are looking forward to spending their first Christmas here, and they’ve already settled one major, potentially contentious festive decision: figuring out which sitting room to put up the Christmas tree in …